The gene spans over 79 kb in human and is encoded in 17 exons on the long arm of chromosome 10.

BLNK is a 65 kDa protein of 456 amino acids. Translation of the BLNK begins at the ATG site located in exon 2 and ends at exon 17. The amino-terminal region of BLNK is rich in tyrosines and contains a highly conserved leucine zipper that is responsible for the recruitment of BLNK to the plasma membrane. The mid-portion of the molecule contains a proline-rich region that has efficient SH3-domain binding properties. Finally the C-terminus consists of an SH2-domain that allows interaction with other tyrosine phosphorylated proteins. Phosphorylated BLNK provides docking sites for several proteins that induces Ig L chain recombination and differentiation.

BLNK is expressed exclusively in hematopoietic cells, mainly in B cells and myeloid cells.

It has been shown that the highly conserved N terminus of BLNK comprises a domain for constitutive membrane association, which is essential for its function. Membrane association depends on a leucine zipper motif in the N-terminal domain. The BLNK N-terminus can be functionally replaced by a heterologuous membrane localization signal and can be transferred to other proteins to confer membrane localization. To connect the pre-B cell receptor (pre-BCR) or the BCR with downstream signaling elements, BLNK must be localized at the plasma membrane where these receptors reside. A stimulation-independent and constant association of BLNK with the Cbl-interacting protein of 85 kDa (CIN85) is requisite for BLNK phosphorylation.

BLNK lacks intrinsic enzymatic function, but regulates the assembly and localization of signaling complexes. Such molecules are known as adapters or linkers and have the capacity to regulate the availability of a substrate to an enzyme and create a scaffold for bridging signaling cascades. Phosphorylated BLNK (by the spleen tyrosine kinase SYK) provides docking sites for several proteins including the BTK, GRB2, VAV, NCK and PLCγ2 (Figure 1). SYK and its substrate BLNK are proximal signal transducer elements of the BCR. When the in vivo interactome of BLNK in resting and stimulated B cells was determined by mass spectrometry, it was found that BLNK orchestrated a complex signal network of ~30 proteins that was predominantly based on dynamic interactions.
Pre-BCR signaling leads to activation of SYK, which then phosphorylates BLNK and thereby regulates pre-B cell differentiation (Figure 1). BLNK is required for the downregulation of the pre-BCR surrogate light chain component λ-like (λ5 in mice), thereby terminating pre-BCR expression. It has been shown in mice that Blnk-mediated signals induces activation of Ig κ light chain recombination by induction of the expression of the transcription factors Aiolos, Irf-4, Foxo3a and Foxo1. Deficiency of Blnk in mice results in an increased proliferative response of pre-B cells to IL-7 in vitro, indicating that Blnk is crucially involved in the termination of IL-7 driven proliferation. BLNK inhibits IL-7R signaling through direct binding to Jak3 in a Btk-independent manner and also by downregulating IL-7R expression (Figure 1). In the absence of Btk mainly Ig λ L chain germline transcription and recombination is impaired, whereas in Btk/BLNK double-deficient pre-B cells, both κ and λ L chain germline transcripts are severely reduced. These data suggests a dual role of BLNK in the downregulation of surrogate light chain expression and the activation of Igκ germline transcription. 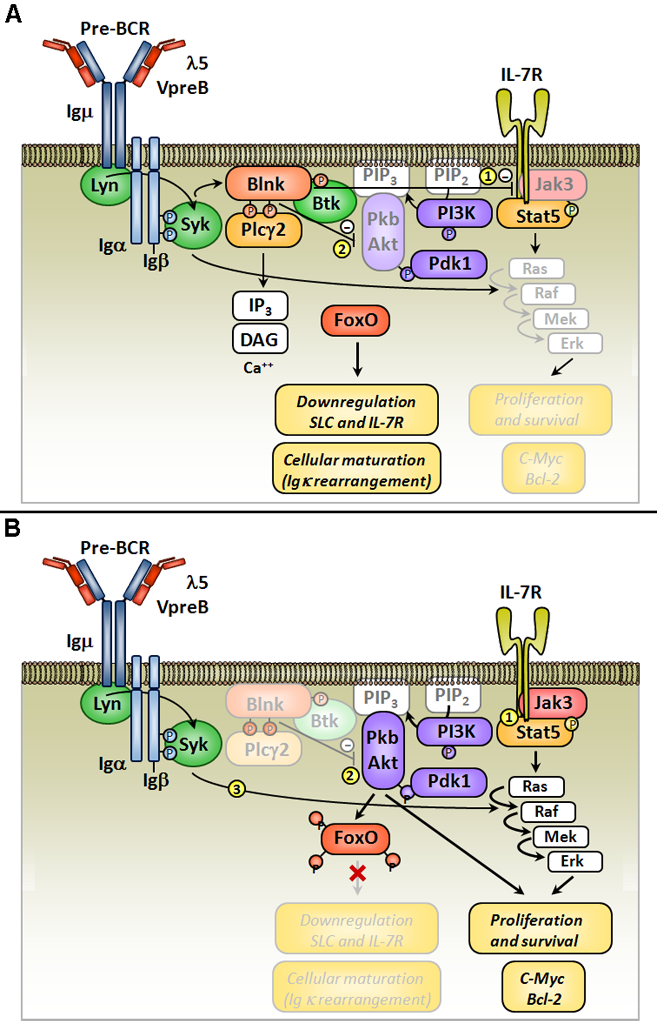 Figure 1. Function of Blnk in pre-BCR signaling in the mouse. A. Pre-BCR activation results in the activation of Syk tyrosine kinase, which together with the Src family kinase Lyn phosphorylates several downstream signaling molecules. This provides signals for proliferation and survival by PI3K-dependent activation of Pkb/Akt and by synergy with the MAP kinase pathway downstream of the IL-7R. In addition, pre-BCR signaling also leads to Blnk-Btk-PLCγ complex formation that is essential for downregulation of proliferative signals. Blnk acts as (1) a negative regulator of Jak3 and (2) through inhibition of Pkb/Akt activation. Activation of FoxO is associated with downregulation of surrogate light chain (SLC) and IL-7R expression and the activation of the Ig kappa locus for gene recombination. B. When in pre-B lymphoma cells Blnk expression is low or absent, proliferative signals are maintained because of (1) ongoing Jak/Stat signaling and (2) Pkb/Akt activation, leading to FoxO phosphorylation and degradation, thereby precluding proper maturation and downregulation of pre-BCR and IL-7R expression, resulting in Syk-dependent pre-B cell proliferation (3).

Entity name
Pre-B cell tumors
Disease
Deficiency of BLNK has been found in ~50% of childhood precursor-B cell acute lymphocytic leukemia (ALL) cases. The loss of BLNK protein was found to be due to defective splicing, leading to premature stop codons. Moreover, in precursor-B ALL that where positive for the BCR-ABL translocation the activity of the fusion protein, the BCR-ABL1 kinase, was linked to the expression of the same aberrant BLNK transcripts. Because other expression profiling studies with a large number of patients reported a low frequency it is not clear whether the loss of BLNK is a common leukemogenic event. Nevertheless, the reported findings indicate that loss of BLNK and the accompanying pre-B cell differentiation arrest may be one of the primary causes of precursor-B ALL. In a study of 28 pre-B ALL and 27 B cell lymphomas, BLNK expression was found to be defective in seven and five cases, respectively. BLNK deficiency correlated with RAG1/RAG2 expression and unremitting VH gene rearrangement activity BLNK deficiency resulted in perpetual V(D)J recombinase activity in pre-B-lymphoblastic leukemia and B-cell lymphoma cells.
Blnk-deficient mice spontaneously develop pre-B cell leukemia with a similar phenotype as found in humans. In contrast, mice deficient for Btk, do not develop pre-B cell leukemia. Nevertheless, Btk and Blnk cooperate as tumor suppressors whereby Btk exerts its tumor suppressor function independently of its kinase activity. Combined deficiency of Blnk and Btk result in a more complete arrest at the pre-B cell stage and a higher incidence of pre-B cell leukemia than compared with single deficient mice, suggesting that the developmental block is one of the tumor-promoting factors. In addition, expression of the pre-BCR is also essential for the development of leukemia, because mice which are Rag-deficient or which cannot express the Ig µ H chain on the surface (e.g. because of deficiency of the pre-BCR component λ5 or due to a disruption of the membrane exon of the Ig µ H chain constant region) are arrested at the pro-B cell stage, but do not develop leukemia. Furthermore, Blnk has a specific function that suppresses malignant transformation because in Btk/Plcγ2 and Irf-4/Irf-8 double-deficient mice with a nearly complete arrest at the large pre-B cell stage no leukemias have been reported. The absence of Blnk results in sustained expression of the pre-BCR and the IL-7R in large cycling pre-B cells (Figure 1). Since IL-7R signaling induces c-Myc this results in constitutively high levels of c-Myc. At this stage, Foxo transcription factors that normally suppress c-Myc-driven lymphomagenesis via direct activation of p19Arf are not properly activated because of the absence of BLNK. Furthermore, IL-7R signaling and aberrant pre-BCR signaling represses Bcl6 and thereby induces p19Arf expression. Subsequently, Blnk-deficient pre-B cells acquiring sporadic alterations in the p19Arf-Mdm2-p53 are selected to become malignant. Furthermore, expression of p19Arf in Blnk-deficient leukemias possibly promotes survival under metabolic stress. The Jak3/Stat5 signaling pathway is constitutively activated in pre-B leukemia cells derived from Blnk-deficient mice, mostly due to autocrine production of IL-7. In the leukemia cells, exogenously expressed Blnk inhibited autocrine Jak3/Stat5 signaling, resulting in p27(kip1) induction, cell-cycle arrest, and apoptosis. Blnk-inhibition of Jak3 was dependent on the binding of Blnk to Jak3.
Btk/Slp65 double-deficient mice that carried a functional B cell receptor transgene (3-83µδ), developed B-cell leukemias expressing both the 3-83µδ BCR and the pre-BCR components λ5/VpreB. Interestingly, these leukemias were found at similar frequencies in mice concomitantly deficient for Rag1 or the non-homologous end-joining factor DNA-PKcs. It was therefore concluded that malignant transformation of Btk/Slp65 double-deficient pre-B cells is independent of deregulated V(D)J recombination activity in the mouse.
Entity name
Other disease
Note
In human, mutations in SLP65 or BTK result in defective pre-B cell proliferation and an almost complete arrest of B cell development at the pro-B to pre-B cell transition, associated with the immunodeficiency disorder agammaglobulinemia. In contrast, mice deficient for Slp65 or Btk show only a partial arrest at the large cycling pre-B cell stage, while a nearly complete block is present in Btk/Slp65 double deficient mice.