Currarino syndrome is a multiple congenital anomalies syndrome characterized by partial agenesis of the sacrum in association with pelvic malformation. Anal atresia and the presence of a pre-sacral mass (teratoma and\/or anterior meningocoele) make up the so called Currarino triad. Other malformations, such as renal (35%) and gynaecological (19%) are common. Hirschsprungs diseasehas also been recorded. Other rarer complications include pelvic abcess, malignant degeneration of a pre-sacral teratoma, E Coli ascending meningitis and spinal cord tethering. Recurrence of a benign teratoma has been recorded. Urinary incontinence, dysmenorrhoea, dyspareunia, poor sphincter control, sacral anaesthesia and headaches precipitated by coughing or straining have been reported.

Autosomal Dominant. De novo mutations have been recorded and account for approximately 15% of cases.

Currarino syndrome was described as a triad by Guido Currarino, an American radiologist in 1981. The triad consists of: 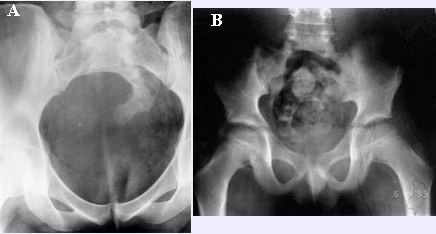 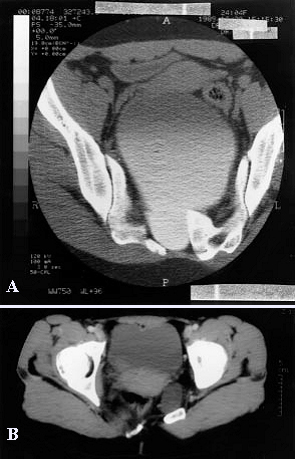 Figure A: CT scan of pelvis showing a large anterior meningocele filling with contrast (this is the same patient as shown in fig 1A).
Figure B: CT of pelvis of adult female showing gross distortion of pelvic anatomy with an abnormal sacral bone and a presacral mass.Courtesy Sally Ann Lynch, reprinted from J Med Genet. 2000; 37:561-566 by permission of the publisher BMJ Publishing Group Ltd of the BMA. 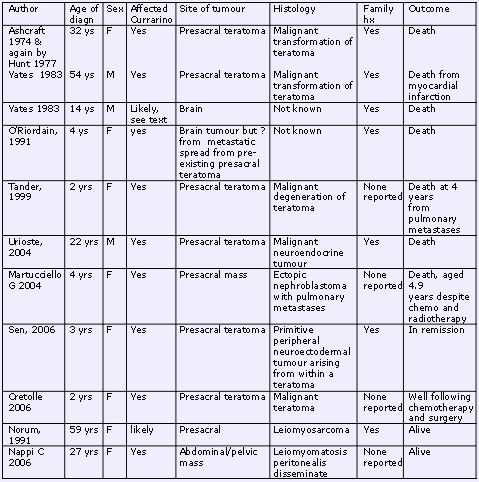 Table 1 summary of the malignant tumours reported in the literature.

The presacral mass associated with the Currarino triad may be a teratoma, hamartoma, neuroenteric cyst, anterior meningocoele or a combination of these three.
A teratoma is a neoplasm originating from primordial germ cells and is derived from all three embryonal germ layers.
A hamartoma is a mass produced by disorganized local tissue growth and can contain all three germ layers.
A teratoma carries a risk for germ cell malignancy, a hamartoma does not.
It has been argued that the reason the risk for malignant degeneration in Currarino syndrome is low is because most of these pre-sacral masses which have previously been classified as teratomas are more likely to be hamartomas. In those rare instances where malignancy has been recorded it is possible that this could have resulted from a secondary carcinoma developing in a chronically inflamed hamartoma rather than a germ cell malignancy.
Malignant change of the pre-sacral tumour has been described but is a rare occurance. The histological appearances are varied and often poorly described particularly in the older literature.
A 32 year old women, who was known to have a pre-sacral teratoma, died from metastatic spread of the tumour. Histological findings were not included in the report (Ashcraft 1973; same patient also reported by Hunt, 1977).
A 54 year old male from a known Currarino family was diagnosed with a presacral mass. This was shown to be a teratoma which had undergone malignant change. A relative of this man, aged 14 years, who had been treated for a rectal stricture, died from a brain tumour, no histology was available. (Yates et al 1983).
A child who died from probable brain metastases was reported in a large Irish pedigree (ORiordain et al 1991). Histology was not available and the child did not have a post mortem. This child had presented at birth with a pre-sacral mass and had surgery. The presacral teratoma recurred at aged 4 years and she died from a brain tumour shortly afterwards.
A female infant who had complete excision of a benign pre-sacral teratoma aged 14 months had a recurrence of a pre-sacral mass at aged 2 ( Tander et al 1999). Histology confirmed recurrence of the teratoma with malignant transformation. The AFP level was extremely high. Treatment was by excision and chemotherapy (bleomycin, etopside and cis-platin) but unfortunately the tumour recurred after 12 months She responded to the same course of chemotherapy but an aggressive recurrence at age 4 years did not respond to treatment and she died from pulmonary metastases.
A 22 year old male was reported who developed a malignant neuroectodermal tumour arising from a pre-sacral mass, (Urioste 2004). He had previously been asymptomatic. He presented with a painless abdominal swelling. A CT scan showed multiple cysts in the liver and it was thought he had isolated liver cystic disease. Lytic pelvic lesions were identified 1 year later on CT and a biopsy of one of these lesions confirmed a well differentiated neuroendocrine tumour. A presacral mass was identified in follow up scans suggestive of a presacral mass with malignant transformation. Biopsy of the mass and the liver confirmed the presence of a neuroendocrine tumour. Chemotherapy was ineffective and he subsequently died. Autopsy confirmed tumour invasion of the liver, pancreas, kidneys and mesenteric lympth nodes. The pre-sacral mass was comprised of neoplastic tissue, teratoma, muscle and fibroadipous tissue.
A 4 year old girl was reported with Currarino syndrome who developed an ectopic nephroblastoma and pulmonary metastases from a presacral mass (Martucciello G 2004). She died despite chemo and radiotherapy.
A 2 year old girl developed a malignant teratoma from a pre-existing presacral mass (Cretolle et al 2006). She was well following chemotherapy.
A 3 year old girl was reported with a malignant tumour arising within a teratoma (Sen et al 2006). Histology revealed the presence of two components; residual mature teratoma and a necrotic malignant tumour resembling a primitive peripheral neuroectodermal tumour. A chemotherapy regimen according to the Euro Ewing 99 protocol was given in addition to radiotherapy. She remained well 8 months following her treatment.
One report of leiomyosarcoma in a grandmother of an affected child with Currarino has been reported (Norum 1991).
In addition, a further case of Leiomyomatosis peritonealis disseminate (LPD) in a 27 year old female with Currarino syndrome has been described in the literature (Nappi 2006). Malignant degeneration of LPD to a leiomyosarcoma has been reported but is rare.
A sacrococcygeal teratoma has been described with a deletion of chromosome 7q, partial trisomy 2p. Malignant degeneration had not occurred and the child died from post-operative complications (Le Caignec 2003). This teratoma was a posterior teratoma and similar to the type often identified antenatally. It is thought to have a different genetic basis to the teratomas seen in the Currarino syndrome. No mutations in the HLXB9 gene have been found in such cases. It is therefore interesting that this child had deleted the HLXB9 gene suggesting some genetic relationship between both conditions.
In classical Currarino syndrome the pre-sacral mass tends to be anterior to the sacrum. The sacrococcygeal teratomas have appeared to be a different group in that they present in the posterior coccygeal region, are often sporadic, occur more commonly in females and commonly become malignant. Mutational analysis of the HLXB9 gene has been negative in a number of cases. This recent case is interesting as it does suggest that HLXB9 is involved in some cases of posterior teratomas (the gene was shown to be deleted in this case) in some cases.

Symptomatic: those children who present at birth with imperforate anus will require emergency surgery. Surgery for the pre-sacral mass is usually advised. The mass can cause an obstruction or other symptoms such as ascending meningitis if an enteric fistula is present. There is also the risk of malignant transformation. Treatment of the mass if it undergoes malignant transformation involves both a surgical and chemothereputic approach. Bleomycin, etoposide and carboplatin are now the gold standard chemotherapeutic treatments. Carboplatin has recently replaced cisplatin as it is less nephro and ototoxic.
Some patients may develop symptoms as a result of their renal or gynaecological malformation and these need to be managed appropriately. Spinal cord tethering is recognized and may recur requiring long term surveillance. Many individuals suffer from chronic constipation. Patients with a pre-sacral mass, particularly those with an anterior meningocoele, can develop headaches if pressure is increased within the abdominal cavity from coughing or sneezing or by lying on their abdomens.

In those children where this condition is diagnosed at birth, a good clinical plus radiological assessment (including pelvic MRI) will identify most of the malformations. Surgery should be considered if a presacral mass is present.
Many of the complications listed above can be avoided if appropriate action is taken in early childhood.

Generally very good. In some patients a colostomy bag is required for life. Some women can present symptoms from their gynaecological malformation and require assessment and occasionally treatment for this. Spinal cord tethering can be another debilitating problem that can recur despite treatment.
If malignant transformation occurs chemotherapy can be effective but recurrences can occur which are resistant to treatment. There are no case reports recording a long remission but as the case reports are so few it is not possible to give definitive prognostic indicators. People have reported recurrence of a teratoma and therefore it is possible that malignancy could occur even if surgery has removed a presacral teratoma. However, the malignancy risk, which is already very small must be reduced even further by elective removal of any pre-sacral mass.

Cytogenetic analysis will be normal in most cases. However, some cases are associated with a 7q36 deletion or a translocation involving this region. It is worth considering FISH analysis of 7q36 in cases where Currarino syndrome is associated with developmental delay.

There is no information on the cytogenetic analysis of the pre-sacral tumours.

HLXB9 is a Homeobox gene. Proteins encoded by homeobox-containing genes are sequence-specific DNA binding proteins implicated in the control of gene expression in both developing and adult tissues.

The HLXB9 gene has 3 exons. The phenotype results from haploinsufficiency of this gene.

In humans, studies have shown expression in the basal plate of the spinal cord and hindbrain and in the pharynx, oesophagus, stomach and pancreas and lymphoid tissue. Significant spatial and temporal expression differences were evident when expression of the gene in human and mouse were compared which may explain the phenotypic disparities observed between the two species.
Tailbud expression has been noted in Xenopus laevis. Studies on human embryos demonstrated expression in the sacral region during embryogenesis albeit predominantly in the anterior horn regions of the spinal cord. In adults the HLXB9 gene is predominantly expressed in the pancreas.
A mouse model of the Currarino triad demonstrated that abnormal differentiation of the tail bud mesenchyme led to defects of the tailgut and neural tube. Etretinate (the teratogenic agent used) disrupted secondary neurulation and resulted in malformations resembling the Currarino triad. The cloacal plate appeared to play a critical role in the development of the anorectum and deficiencies of this caused anorectal malformation.

The HLXB9 gene functions as a transcription factor regulating gene expression in both developing and adult tissues. Little is known about target genes or protein partners.

The HLXB9 sequence shows up to 96%, 91% and 80% identity to orthologues in mouse, chick and Xenopus respectively. Sequence homology to Drosphilia homeobox genes and to the human homeobox gene PDX-1 suggest that some mutations within the HLXB9 homeodomain may alter the DNA binding specificity while other mutations may reduce nuclear translocation of the mutated protein.

There is a polyalanine region consisting of 16 alanines. There are population differences in the polyalanine domain but little correlation between the presence of disease or the variable penetrance of disease and the number of GCC repeats in patients.

There have been no recorded cases of germ line mosaicism.

There have been no recorded cases of somatic mosaicism.