LEOPARD syndrome is characterized by multiple lentigines, cardiac anomalies, facial dysmorphisms, abnormalities of the genitalia in males, retardation of growth, and deafness. LEOPARD syndrome shares many features with Noonan syndrome, in which lentigines and deafness usually are not present. Molecular studies have demonstrated that LEOPARD and Noonan syndromes are allelic conditions. 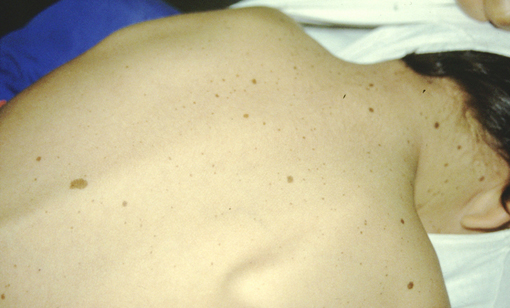 Legend: Typical multiple lentigines in a patient with LEOPARD syndrome

A distinct class of somatic mutations of PTPN11, appearing to have high gain-of-function levels, contributes to leukemogenesis. The identification of these mutations at a germinal level explains the higher prevalence of myeloproliferative disorders and acute leukemia among children with Noonan or LEOPARD syndrome. The RAS\/MAPK pathway is deregulated in juvenile myelomonocytic leukemia due to mutations in NRAS, KRAS2 or NF1. It has be hypothesized that germline or somatic mutations in PTPN11 could also interfere with RAS\/MAPK pathway.
Multiple granular cell myoblastomas, a tumor believed to arise from Schwann cells, have been reported in one patient.
Central giant cell granulomas presenting as cyst-like lesions in the mandible have also been described in LEOPARD syndrome.
Choristoma, a congenital corneal tumor containing cellular elements of ectodermal derivatives, may occasionally coexist with LEOPARD syndrome.

beta-blockade or calcium channel blockers are most frequently used in treatment of obstructive cardiomyopathy. If there is no response to drug therapy, surgery for left ventricular outflow obstruction or transplantation can be indicated.
The use of lasers has been shown to be effective in the treatment of lentigines. Noninvasive agents such as tretinoin cream and hydroquinone cream used in combination have been shown to lighten lentigines after several months of application.

The prognosis is mainly determined by the nature and severity of cardiac lesions. In fact, the major concern is that of hypertrophic cardiomyopathy, because of its association with arrhythmia and sudden death.

Chromosome analysis is normal in patients with LEOPARD syndrome.

The protein-tyrosine phosphatases are a highly polymorphic set of molecules having a role in regulating the responses of eukaryotic cells to extracellular signals. They achieve this by regulating the phosphotyrosine content of specific intracellular proteins. The pathogenetic mechanism that cause PTPN11 mutations to specifically exhibit a dermatological phenotype and preferentially cardiac expresssion in hypertrophic cardiomyopathy is at present unclear.

LEOPARD syndrome has proved to be allelic to Noonan syndrome, with two recurrent PTPN11 mutations in exons 7 (Tyr279Cys) and 12 (Thr468Met). Additional mutations in exons 7, 12, and 13, different from the two common mutation hot spots, have been reported as a rare occurrence in the syndrome. All the mutations occur in exons that code for the protein tyrosine phosphatase (PTP) domain. Molecular and biochemical studies have shown that the mutations destabilize the catalytically inactive conformation of the protein, resulting in a gain of function. PTPN11 mutations are detectable in about 90% of patients with LEOPARD syndrome.