Used to also be known by B-K mole syndrome.

Melanoma is hereditary in approximately 10% of the cases. The definition of hereditary melanoma is now described as a family in which either 2 first-degree relatives are diagnosed with melanoma, or families with 3 melanoma patients (irrespective of degree of relationship). The co-existence of melanoma and atypical nevi within families has been described and the syndrome has therefore been named Familial Atypical Multiple Mole-Melanoma (FAMMM).
Initially it was assumed that a simple dominant factor would be responsible for both melanoma and atypical nevi. However, after the cloning of the first melanoma susceptibility gene, genotype\/phenotype correlation studies in mutation positive families soon revealed the complexities of the FAMMM syndrome. It appeared that atypical nevi do not neatly segregate with the mutation; this means that also non-carriers could have a florid nevus phenotype. 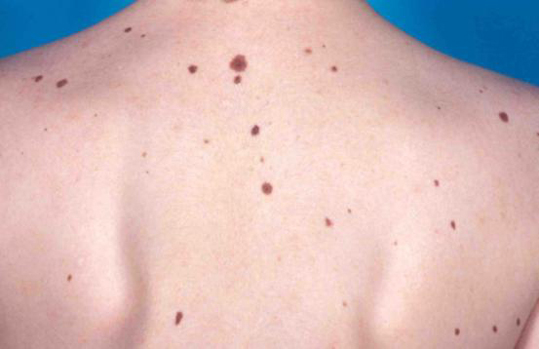 Pigmented lesions on the back of a patient from a melanoma family, displaying many common and atypical nevi.

The penetrance of melanoma in CDKN2A mutation carriers has recently been investigated by the International Melanoma Genetics Consortium, in which research groups from all over the world participate and is estimated to be 67% by the age of 80 years. This same study also showed the penetrance figures in hereditary melanoma to be different depending on geographic location. These differences between geographic locations were proportionate to the differences seen in sporadic melanoma, with the penetrance in Australia, USA and Sweden being 3.74 times higher than in Western Europe.
Risk of several other tumors has been reported but remains to be confirmed. However, the evidence for an increased risk of pancreatic carcinoma in CDKN2A mutation positive families is very strong.

Yearly surveillance of melanoma patients and their first- and second-degree relatives from age 12 onwards.

If melanoma is identified at an early stage the disease has a good clinical outcome. On the other hand, life expectancy figures drop quickly with an increasing thickness of the tumour (approximately 55% 5 year survival with thickness over 1.5 mm). Early recognition of melanoma, or even better so, early recognition of precursor lesions of melanoma by skin screening for those at risk is therefore of utmost importance.

Linkage studies suggest that approximately half of the melanoma families link to 9p21. Not in all families that link to 9p21, a CDKN2A mutation could be found. The 9p21 locus is therefore thought to harbour a second melanoma susceptibility gene, which is supported by several LOH studies in melanoma patient material. Recently however, 2 mutations have been described in the non-coding region of CDKN2A. Both the mutation in the 5 untranslated region of Canadian melanoma families as well as the deep intronic mutation in UK families turn out to be the most common CDKN2A mutations in those populations. Intronic mutations might explain a large part of the 9p21 linked families, in which no exonic CDKN2A mutation has been found.

The CDKN2A locus and its transcripts, p16 and p14ARF, generated by alternative splicing. Boxes indicate exons, and coloured sections the protein coding regions within them.

The normal levels of p16 and p14ARF expression are low in tissues and primary cells and are upregulated with in vitro senescence, ageing, and illegitimate oncogene activation. Loss of p16 expression is observed during tumor progression.

Interpretation of p16 stains by immunohistochemistry is controversial. Some consider both nuclear and cytoplasmic staining to be specific, whereas others consider cytoplasmic staining to be a confounding background and see only nuclear staining as relevant for p16 function. p16 is a small protein that might freely diffuse in and out of the nucleus and should be available to interact with its partners in both cellular compartments. Some immunofluorescence studies on inactivating mutations within CDKN2A have shown that they lead to accumulation or mislocalization of the mutant forms of p16 preferentially in one or other compartment. P14ARF is localized predominantly in the nucleolus but is also present in the nucleoplasm.

In 17 to 20% of sporadic melanomas a somatic mutation is found.

Candidate gene searches have led to the finding of a second melanoma susceptibility gene.

All CDK4 mutations found so far are located in exon 2 and affect codon 24.