Diagnosis of GAD-antibody associated stiff-person syndrome is made according to the following criteria:Prodrome of stiffness and rigidity in axial muscles
Progression to include stiffness of limbs, making walking difficult
Increased lumbar lordosis
Presence of superimposed painful spasm, often precipitated by external stimuli (auditory stimulation like hand clapping)
Normal sensation, no paresis
An EMG finding of continuous motor unit activity (CMUA) at rest
Response to benzodiazepines including clinical response and reduction on CMUA
High levels of GAD antibodies
Other features: Less frequently, stiff-person syndrome is associated with antibodies to the 128 kDa synaptic protein amphiphysin. It is then a paraneoplastic condition, most often occurring with breast cancer. The pathogenic role of the antibodies directed against the 128 kDa synaptic protein amphiphysin has been shown by transmission of disease symptoms by passive transfer to rats. One case of stiff-person syndrome associated with antibodies to the synaptic protein gephyrin has been described. 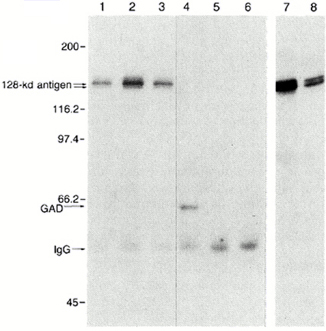 Western blots of brain homogenates showing protein antigens recognized by serum and cerebrospinal fluid samples from patients 1,2 and 3, affected by stiff-man syndrome and breast cancer (lane 1,2 and 3) and by serum samples from control patients and normal subjects. The sera from the three patients affected by affected by stiff-man syndrome and breast cancer did not react with the Gad band, which was recognized by a human serum positive for GAD antibodies (lane 4). Lane 5, serum from a control patient with the stiff-man syndrome who did not have GAD antibodies; and lane 6 serum of a normal subject. A band with an apparent molecular mass of 128 kd was recognized by the serum samples of patient 1, 2 and 3. Lane 7 and 8 were both loaded with 20 ug of protein from a homogenate of a rat brain and were labelled with serum and cerebrospinal fluid, respectively, from patient 3. (Reprinted with permission from F. Folli et al, Autoantibodies to a 128 kd protein in three women with the stiff-man syndrome and breast cancer. N Engl J Med 1993; 328: 546-551. Copyright 1993 Massachusetts Medical Society. All rights reserved). 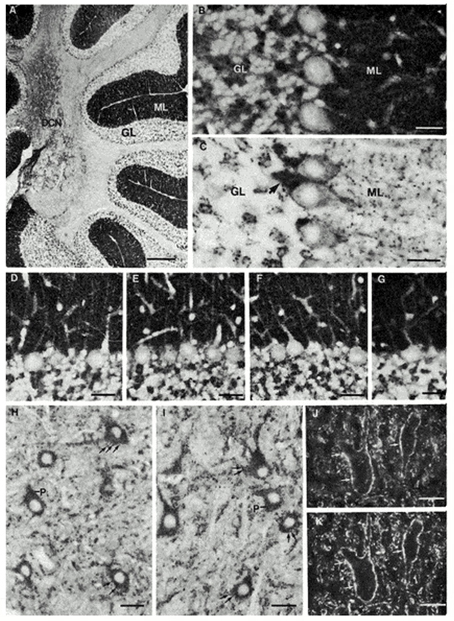 Photomicrographs of Sections of Rat Cerebellum and Brain Stem Stained with Serum Samples (Diluted 1:20) from Patients 1, 2, and 3 affected by stiff-man syndrome and breast cancer, and a Control Patient affected by stiff-man syndrome with autoantibodies against glutamic acid decarboxilase and with Rabbit Antibodies to Synaptic-Vesicle Proteins.
In Panels A through I, immunoperoxidase staining was used (immunoreactive areas are black), and in Panel J and Panel K, immunofluorescence staining was used (immunoreactive areas are white). In Panel A, a sagittal section of cerebellum stained with serum from Patient 1 shows staining of all regions containing synapses in the cerebellar cortex and the deep cerebellar nuclei (DCN). The dense staining of the molecular layer (ML) and the patchy staining of the granular layer (GL) correspond to the known distribution of synapses in the two layers.
In Panel B, cerebellar cortex stained with serum from Patient 3 shows widespread immunoreactivity on synapses.
In Panel C, cerebellar cortex stained with serum from a patient with the stiff-man syndrome that contained glutamic acid decarboxylase antibodies shows only a few immunoreactive synapses, corresponding to aminobutyric acid-ergic synapses. These include synapses made by basket-cell axons around the axon hillocks of Purkinje cells (arrow).
In Panel D, Panel E, and Panel F, adjacent sections of cerebellar cortex stained with serum samples from Patients 1, 2, and 3, respectively, have identical patterns of immunoreactivity. This pattern is very similar to that produced by rabbit antibodies directed against a nerve-terminal marker, synapsin I, as shown in Panel G.
In Panel H and Panel I, adjacent sections of deep cerebellar nuclei stained with serum samples from Patients 1 and 3, respectively, show localized immunoreactivity in the cytoplasm of neuronal perikarya (P) and dendrites as well as in the nerve terminals that form synapses at their surfaces (arrows). Double-immunofluorescence labeling of a brain-stem section with serum from Patient 3 (Panel J) and antibodies directed against synaptophysin (Panel K), a synaptic-vesicle marker, shows nerve terminals filled with synaptic vesicles (white puncta). The profiles of neuronal perikarya and dendrites (arrows) are apparent. The scale bar measures 0.25 mm in Panel A, 25 microm in Panel B and Panel C, 50 microm in Panels D, E, F, and G, and 25 microm in Panels H, I, J, and K. (Reprinted with permission from F. Folli et al, Autoantibodies to a 128 kd protein in three women with the stiff-man syndrome and breast cancer. N Engl J Med 1993; 328: 546-551. Copyright 1993 Massachusetts Medical Society. All rights reserved). 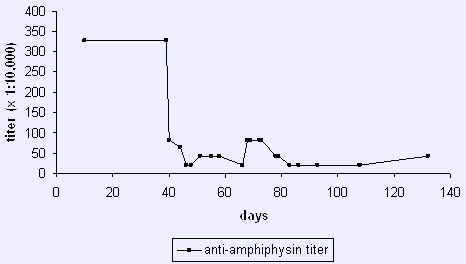 GAD-antibody positive stiff-person syndrome has not been described as a paraneoplastic condition. Most cases of amphiphysin antibody associated stiff-person syndrome are paraneoplastic. Cancers described are breast cancer, small-cell lung, and ovarian carcinoma. The one case with anti-gephyrin antibodies was associated with an undifferentiated carcinoma of the mediastinum.

Patients may respond to symptomatic treatment with benzodiazepines, and to a certain extent baclofen, valproic acid, tiagabine, and other drugs enhancing GABAergic transmission. Given the autoimmune pathogenesis immunosuppression, plasmapheresis, and high dose intravenous immunoglobulins (IVIG) seem to be treatments of choice. The only randomized controlled trial in this disorder showed that IVIG was an efficient treatment in GAD-antibody positive stiff-person syndrome. In the paraneoplastic forms, removal of the cancer is essential. Anti-amphiphysin associated stiff-person syndrome has been successfully treated with plasmapheresis.

GAD-antibody positive stiff-person syndrome is usually slowly progressive, but can make patients bed-bound in the end. The paraneoplastic types are usually rapidly progressive and may be associated with encephalitis and other paraneoplastic syndromes. The prognosis of the neurological disorder depends on tumor treatment.

AMPH is a 128 kd synaptic protein. It supports endocytosis at synapses by the formation of dynamin-rings around clathrin vesicles. Stiff.person syndrome, with autoantibodies directed against Amphiphysin, is associated with breast cancer.

GPHN is a postsynaptic protein needed for the clustering of glycine receptors.