Ollier disease is a rare skeletal disorder which is characterized by the occurrence of multiple cartilaginous tumours particularly in the medulla of the metaphyses and diaphyses of the short and long tubular bones of the limbs, especially the hands and feet, often with a unilateral predominance.

Solitary enchondroma is far more common than the occurrence within Ollier disease and is often an incidental finding. Enchondromas can occur anywhere in the skeleton, with a predilection for the hands and feet as well as long bones of upper and lower extremities. The diagnosis is based on roentgenographic appearance as well as clinical features. Lesions affecting the proximal bones are more severe and the region of the knee joint and the lower end of the radius and ulna are particularly common sites and are more prone to pathological fractures. Development of palpable bony masses may cause angular deformity and asymmetric growth. Surgery could be required in case of limb length inequality. The only clinical sign of the disease is severe deformities and bone shortening which may lead to limitations in joint motility. Radiographically, cortical destruction and soft tissue extension are suspicious for malignant transformation of enchondroma. Histologically, enchondromas from Ollier disease patients show more worrisome features such as higher cellularity, pleomorphism and binucleated cells as compared to solitary enchondromas. 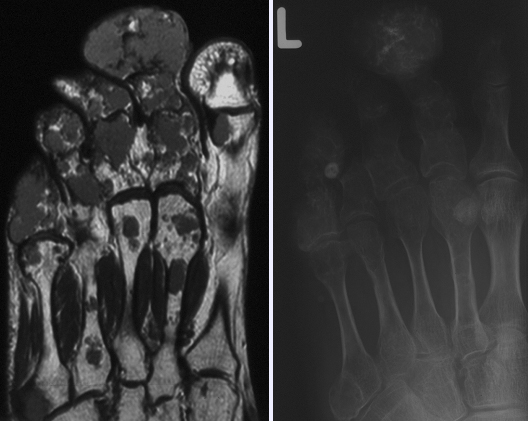 Patients with solitary enchondromas have very low chance (<1%) to develop secondary central chondrosarcoma whereas Ollier patients have an increased life time risk of 15% to 30%. Some patients may develop multiple synchronous or metachronous chondrosarcomas. Pathological fractures can occur at the site of an enchondroma but does not always indicate malignant transformation. In case of benign tumors, the principle symptom is swelling while pain is uncommon and if present, it is usually due to pathological fracture or can be the first sign of malignancy. Increase in tumor size, cortical erosion, extension of the tumor into soft tissues and pain are the signs for malignant transformation. Chondrosarcoma associated with Ollier disease seems to occur more frequently in female as compared to male patients.

For enchondromas a wait- and -see policy is justified, since these are benign lesions. They can be operated in case of complaints or cosmetic deformity. Enchondromas in phalanges and metacarpals can be curetted and the cavities can be filled with stored cancellous bone or cortical bone graft. In Ollier disease, patients have multiple lesions affecting different regions in the body. Therefore, selection is required for the operative treatment. Surgery can be done in case of complications such as growth defect, pathological fracture and malignant transformation. Lifelong monitoring is required in Ollier patients given the risk of malignant transformation. Leg-length discrepancy in Ollier disease can be corrected using fully implantable lengthening nail. Amputation can be required in case of severe limb shortening and osteotomy can be done to correct deformity and to unite the fragments readily. Ilizarov technique can be used also.

The exact cause of Ollier disease is not known yet but is believed to be a random spontaneous mutation. Previously, a mutation (p.R150C) in PTHR1 (3p22-p21.1) was reported in two out of six patients but an elaborative study on 31 patients failed to detect any mutations in PTHR1. Previously, it has been shown that IHH signalling is very low while PTHLH signaling was active in Ollier disease. Recently, in 3 out of 14 Ollier patients three additional heterozygous missense mutations (p.G121E; p.A122T and p.R255H) were identified in PTHR1. Two mutations, p.G121E and p.A122T were heterozygously present only in enchondroma from the Ollier patient while p. R255H was present in tumor as well as in leukocyte DNA. These mutations were shown to decrease the function of the PTHR1 receptor. Thus, heterozygous PTHR1 mutations may contribute to Ollier disease in a small subset of patients. PTHR1 is a receptor for parathyroid hormone and for parathyroid hormone-related peptide whose activity is mediated by G proteins which activate adenylyl cyclase and also a phosphatidylinositol-calcium second messenger system.
Genetic studies on high grade chondrosarcoma of the tibia from a patient with Ollier disease revealed LOH (loss of heterozygosity) for chromosomal bands harbouring the RB1 (13q14) and CDKN2A (9p21) tumor suppressor genes and there was overexpression of the TP53 protein. However, these changes were absent in femoral enchondroma of the same patient.
A del(1)(p11q31.2) has been described in a low grade chondrosarcoma of the scapula in an Ollier patient. Results of cDNA microarray showed similar expression profiling of Ollier disease related tumors as compared to solitary tumors. Array CGH data of four Ollier samples (2 phalangeal enchondromas and 2 grade II chondrosarcomas) showed highly variable genetic abnormalities. One phalangeal enchondroma revealed no alteration while another sample showed complete loss of chromosome 6. The two grade II chondrosarcoma showed gains and losses of several chromosomes. One of the grade II chondrosarcomas showed gain of almost the entire chromosomes 2,5,8,15,19,20,21 and 22 and gain of parts of chromosomes 1,5,7,9,16,17 and 18. The other Ollier disease related chondrosarcoma grade II revealed losses on chromosomes 1,3,4,6,9,10,13,15,16,22 as well as amplifications on chromosomes 6,7,12,14,15,16,17,18,19.