Wbc
19.6
Hb
12.3
Platelets
15
Blasts
68
Bone marrow
The specimen was taken from the iliac crest and particle crush smears appeared cellular but dilute. The trephine imprints were cellular. No significant maturation of the myeloid series was present. The myeloid series were primarily composed of segmented neutrophils. No erythroid dyspoiesis was evident. Only a rare magakaryocyte was seen. Blasts were similar to those of the peripheral blood and appeared very delicate and easily crushed. No Auer rods were seen. 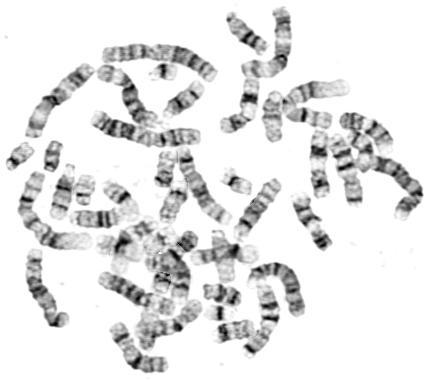 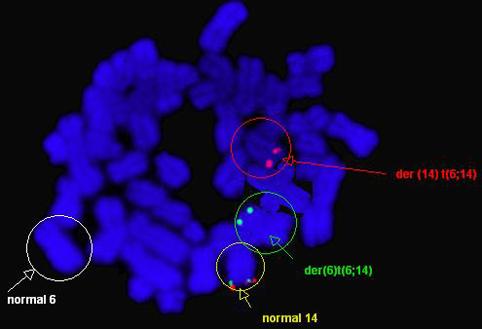 Comments
There are few reports documenting t(6;14)(p21.1;q32.3), in cases of multiple myeloma/plasma cell leukemia and diffuse large B cell non Hodgkin lymphoma. Our case report shows a karyotype with multiple abnormalities. One significant abnormality observed was the loss of 9 p in the form of i(9)(q10), which is a common finding in precursor B-cell lymphoblastic leukemia. Our case also showed partial deletions of 5q and 17p. We observed a novel translocation t(6;14) (p22;q32) in a patient with Precursor B-cell Acute Lymphoblastic Leukemia. FISH studies performed on the metaphases of this specimen confirmed the translocation of IGH (located on 14q32.3). E2F3 is a transcription factor located on 6p22 that is reported to play a critical role in regulating normal cellular proliferation and differentiation. Though the exact gene in 6p22 translocation is not yet known, it is speculated that E2F3 might be clinically significant in leukemia/MDS. However, involvement of Geminin, DNA replication inhibitor (GMNN) located on 6p22.2 cannot be ruled out.
Call for collab
Dr Siddharth G Adhvaryu, Director, Cytogenetics Laboratory, UTHSCSA, San Antonio, TX-78229, Ph: 210-567-4021, 210-567-4050/4051; E-mail: ADHVARYU@UTHSCSA.EDU