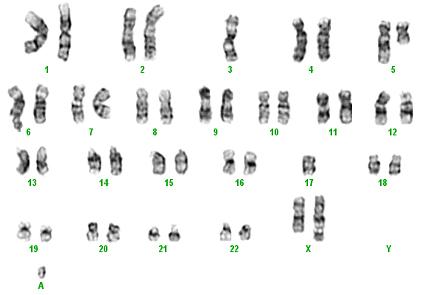 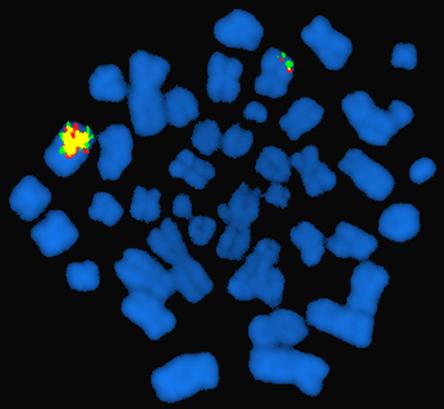 FISH with LSI MLL/11q23 probe showing amplification of MLL gene (arrow) along with one normal copy. 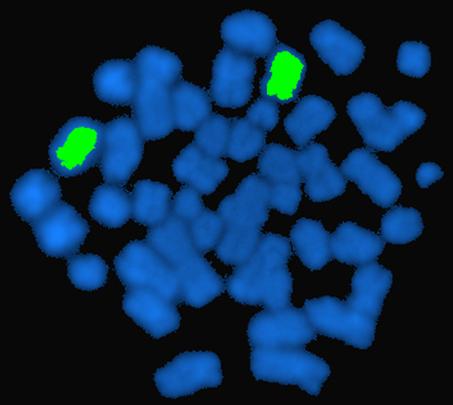 Comments
The case described here is of a 75-year-old female who was diagnosed with AML with multilineage dysplasia. Cytogenetics revealed a complex aberrant karyotype (CAK) including deletion of 5q and loss of chromosome 17. In addition, FISH confirmed deletion of EGR1/5q31 and showed amplification of MLL/11q23 gene in the form of hsr at 11q. Literature suggests an association of amplification of MLL with CAK. Moreover, deletions of 5/5q and 17/17p, such as in our case, are frequently found along with MLL amplification. Previously reported AML cases with MLL amplifications tend to occur in elderly patients, and are characterized by rapid progression, poor response to treatment, and poor clinical outcome. The present case supports the notion that MLL amplification is commonly found in the setting of CAK with deletion of chromosome 5 and 17. Thus, the presence of MLL amplification along with deletion 5q in AML cases appears to be a genomic pattern which signifies a poor prognosis in elderly patients.