Wbc
138.7
Hb
6.9
Platelets
51
Blasts
76
Bone marrow
100 Bone marrow biopsy was hypercellular (100%) and replaced by myeloblasts and monoblasts. Normal hematopoiesis was greatly decreased and there was prominent hemophagocytosis. The majority of the blasts were myeloperoxidase positive however another smaller component of blasts was nonspecific esterase positive

Technics
Fluorescence in situ hybridization (FISH) using LSI CBFB dual color break-apart rearrangement DNA probes (Abbott Molecular IL, USA), and CBFB/MYH11 dual fusion translocation DNA probe (Cytocell Inc. Cambridge, UK) were performed.
Results
The hybridization with the CBFB break-apart probe produced a split pattern in 62% of interphase cells. On metaphase cells, the 5 CBFB (SepctrumRed) and 3 CBFB (SepctrumGreen) signals stayed on the 16q, instead of 5 CBFB being relocated to 16p as seen in the standard inv(16). The CBFB signals were separated but maintained the orientation pattern of the 5 and 3 probe, suggesting they were split by an insertion (Figure 2A). Subsequently, using the CBFB-MYH11 probe on metaphases showed that MYH11 signal on 16p moved and juxtaposed to CBFB on 16q, confirming the insertion of MYH11 into CBFB (Figure 2B). 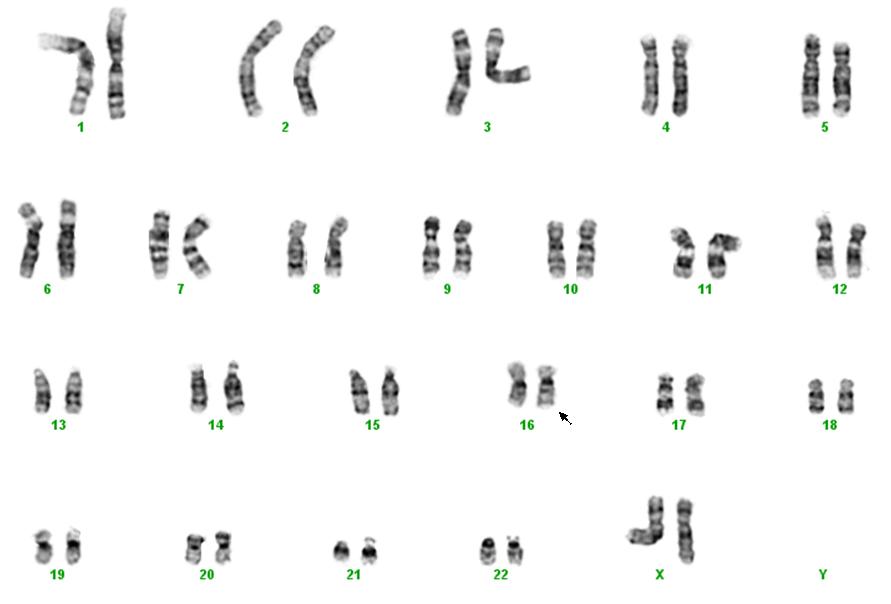 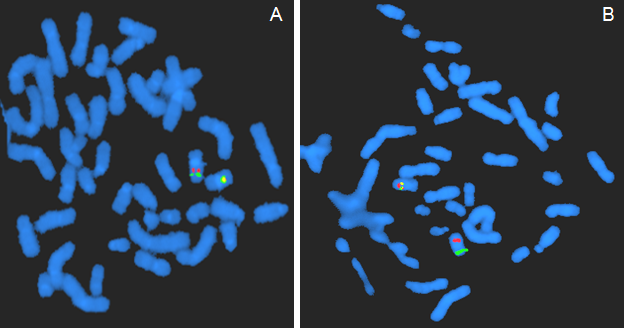 Comments
The CBFB/MYH11 gene fusion is strongly associated with AML-M4 with abnormal eosinophils. Generally, the fusion is generated from inv(16)(p13q22) or t(16;16) with the inversion being much more common than translocation (Le Beau et al., 1983; Tobal et al., 1995). The case presented here demonstrates that insertion is another mechanism in producing CBFB/MYH11 gene fusion in AML-M4eos. To our best knowledge, there is only one reported case of AML-M4 having similar structural abnormality of chromosome 16 and CBFB/MYH11 fusion (O Reilly et al., 2000). These two cases suggest that insertion represents a variant rare rearrangement for the formation of this fusion. FISH is highly recommended to characterize unusual abnormalities of chromosome 16 and to confirm the CBFB-MYH11 fusion.