Date diagnosis
02-2013
Treatment
Following diagnosis, the patient was seen at an outside institution for treatment and was placed on Revlimid therapy as opposed to induction chemotherapy for about 5 months without improvement or significant deterioration of her blood counts. She was referred to our institution to be evaluated for allogenic stem-cell transplantation. A repeat bone marrow biopsy (~6-7 months post diagnosis) confirmed persistent AML, and the cytogenetic studies were performed. The patient was then started on 7+3 AML induction (Cytarabine 320 mg IV continuous days 1-7, Idarubicin 19 mg IV on days 3-6). A day 16 repeat bone marrow biopsy showed persistent presence of abnormal myeloblasts. Biopsy about 6 weeks following induction therapy showed remission with no excess or abnormal myeloblasts. She was subsequently admitted and completed her first cycle of consolidation chemotherapy with high-dose cytarabine (3 gm/m2 IV q 12 hours on days 1, 3, 5 for 6 doses).
Complete remission
+
Treatment relat death
-
Relapse
-
Status
A
Date last follow
12-2013
Survival
9

Note
The previous FISH studies on G-banded metaphases showed that the AML1 signal was split and moved to 7p, and the subtelomeric probes for 7p/q showed that the 7p signal moved to 21q, thus, establishing the t(7;12). 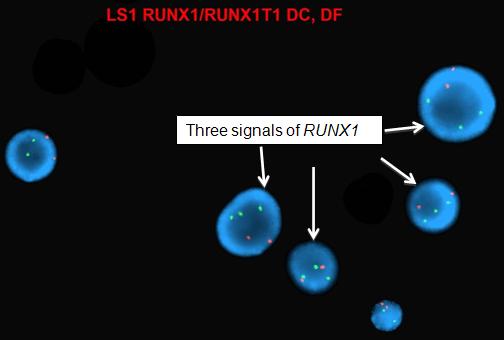 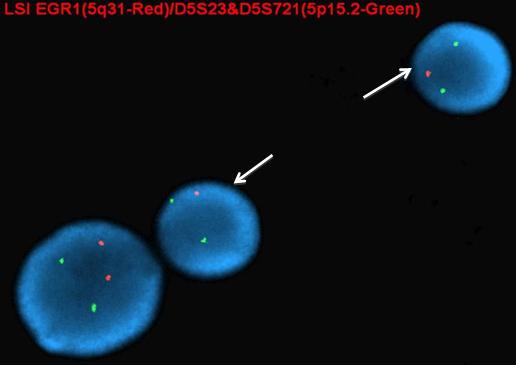 Interphase FISH with two signals of 5p15.2 region (green) and one signal of EGR1 (orange) suggests loss of 5q. 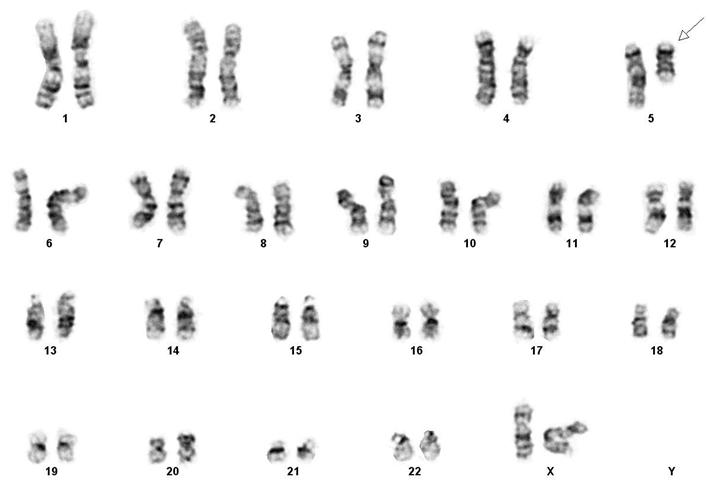 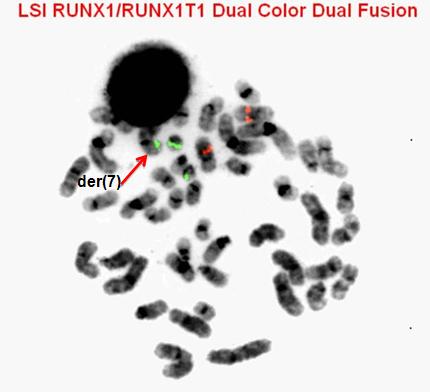 The sequential FISH study on a previously G-banded metaphase with LSI RUNX1/RUNXT1 probe showing the green signals of RUNX1 on der(7), der(21) and normal chromosome 21, respectively. Two normal orange of RUNXT1 are seen on the chromosomes 8. 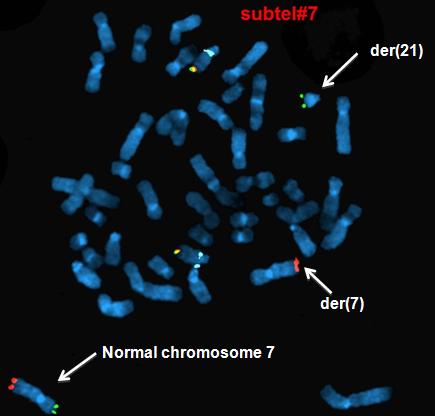 FISH with TelVysion 7p (green, on the sub-telomere region of 7p), 7q (orange, on the sub-telomere region of 7q) and chromosome 14 (yellow and aqua) showing one green signal of 7p on der(21), and the der(7) is missing a green signal. Two normal chromosomes 14 are seen as indicated by the signal pattern (one yellow and one aqua signals on two normal chromosomes 14 respectively).

Comments
Our presented case also had evidence of persistent leukemia after 6 months of initial treatment with Revlimid (at another institution), but achieved complete remission by morphology, flow, and cytogenetics after standard 7+3 AML induction chemotherapy. She has since completed her first cycle of consolidation chemotherapy (high-dose Cytarabine) without incident. She is alive and in remission as of 9 months from diagnosis.