Isolated 1q21 rearrangement der(20)t(1;20)(q21;p13) with telomere involvement of 20p in a case of longstanding myelodysplastic syndrome

Wbc
4.3
Hb
7.8
Platelets
232
Blasts
0
Bone marrow
0 Bone marrow was hypercellular with erythroid hyperplasia (68% erythroid precursors) and erythroblastic and megakaryocytic dysplasia. The most typical dysplastic features in the erythroid line were the changes in nuclear morphology (multinuclearity, nuclear hyperlobulation, irregular nuclear contours and karyorrhexis). Some of the erythroblasts resembled the blasts of the pure erythroid leukemia (large cells with deep cytoplasmic basophilia and oval nucleus with prominent nucleolus). The test of ring sideroblasts was positive (55%). Megakaryocytic dysplasia was present with hypo- or unilobulated megakaryocytes of all sizes. Micromegakaryocyte and dysplastic megakaryocytic fragments were also seen.

Immunophenotype
not done
Rearranged ig tcr
not done
Pathology
The peripheral blood morphology was characterized with poikilo anisocytosis and presence of single oxyphilic erythroblasts. Differential blood count was 1% myelocytes, 2% metamyelocytes, 32% bands, 27% segments, 20% lymphocytes, 17% monocytes and 1% eosinophils.
Electron microscopy
not done
Precise diagnosis
Refractory cytopenia with multilineage dysplasia and ring sideroblasts.
Note
The patient was hospitalized for the first time in January 2006 with two years history of mild anemia. The examinations showed: Hb 104 g/dl, WBC 5x109/l and platelets 327x109/l. Bone marrow was hypercellular with dysplasia of the erythroid lineage presented with megaloblastic erythropoiesis. Conventional cytogenetic analysis revealed a karyotype of 46, XY,der(20)t(1;20)(q21;p13)[20]. The diagnosis of refractory anemia was made and the patient was followed-up until 2015. In this period the patient was in a good clinical condition and good quality of life maintaining hemoglobin value between 95 -120 g/dl without blood transfusions. In October 2015 the patient was hospitalized again. Conventional and molecular cytogenetic analyses confirmed the karyotype of 46,XY,der(20)t(1;20)(q21;p13). The diagnosis of refractory cytopenia with multilineage dysplasia and ring sideroblasts was made and the patient received supportive treatment with blood transfusions. In February 2016 the disease progressed to a refractory anemia with excess of blasts-2 (14% myeloblasts in bone marrow) and one course of chemotherapy with low doses of Cytarabine (80 mg daily) was carried out. The patient was followed-up in a satisfactory clinical condition maintaining hemoglobin value between 75 and 80 mg/ml and myeloblasts in the bone marrow between 2% and 4%.

Sample
Bone marrow
Culture time
24
Banding
GTG banding.
Results
The conventional cytogenetic study revealed karyotype of 46,XY,der(20)t(1;20)(q21;p13)[33] (Fig. 1A). This unbalanced translocation resulted in the formation of a derivative chromosome, composed of the recipient chromosome 20 and the additional copy of 1q21->qter: der(20)(1qter->1q21::20p13->20qter). In some metaphases the translocated segment 1q21qter is as though attached to an intact chromosome 20, suggesting that the breakpoint in 20p is sub-telomeric or telomeric (Fig.1A).
Mol cytogenet technics
FISH examinations were carried out according to manufacturer s instructions, using arm specific probes for 1q (ASP1q) and 20p (ASP20p), sub-telomere DNA probe for 20p (Kreatech Diagnostic, Leica, Germany) and telomere probe for 20p (Vysis/Abbott Molecular, Des Plaines, IL, USA). Sub-telomere DNA probe was applied independently and in combination with the arm specific probes for 1q. Images were captured and analyzed with epifluorecsent microscope Nicon 80i (Nikon corporation, Tokyo, Japan) equipped with CCD camera and DAPI/red/green filter set.
Mol cytogenet results
FISH examination with ASP1q and ASP20p probes and combination of sub-telomere DNA probe with ASP for 1q showed normal sub-telomere confirmed the 1q trisomy and demonstrated that the additional copy of 1q21qter was translocated to the short arm of chromosome 20 (Fig 1B and 2A). In two of the 55 metaphases analyzed der(20) was not present. One was with trisomy and the other one with tetrasomy of chromosome 1. FISH examination with both sub-telomere and telomere DNA probes for 20p showed normal sub-telomere and telomere signal patterns - ish der(20)t(1;20)(q21;p13)(D20S1156x2) and ish der(20)t(1;20)(q21;p13)(D20S1157x2) (Fig 2B, 2C and 2D).

Technics
Microarray examination of the patient s bone marrow DNA was performed with CGH+SNP 60K microarray platform (OGT, Oxford, UK) according to the manufacturer s protocol. The hybridization of the reference and patient s DNA was made via incubation in Mai-Tai hybridization system (SciGene, USA) for 22-hours at 65oC. Slides were scanned using scanner GenePix 4400A (Molecular Devices, USA) and features were extracted by GenePixPro7 software (Molecular Devices, USA). The microarray patient s profile was analysed with CytoSure Interpret software, v 4.4.6. (OGT, Oxford, UK) using HG 19.
Results
aCGH study found only the gain of the segment 1q21qter and revealed no 20p losses - arr[hg] 1q21.1q44(142,706,628-248,514,266)x3 (Fig.3 D and C). Both aCGH and FISH study with sub-telomere and telomere probes indicated that the breakpoint in the derivative chromosome 20 is located in the telomere region. 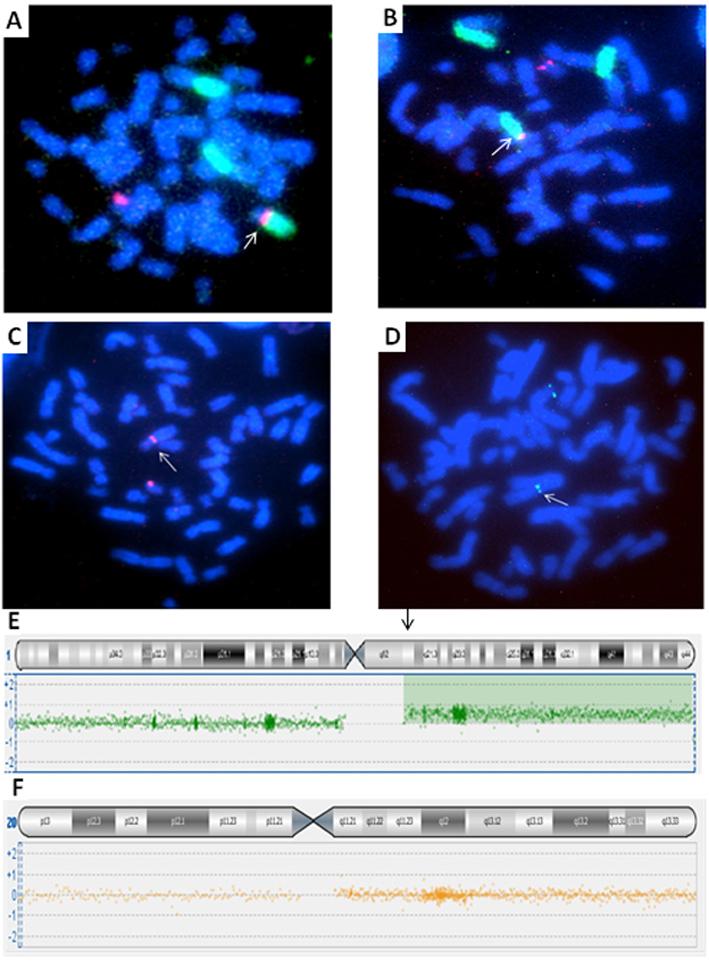 Isolated 1q21 rearrangement der(20)t(1;20)(q21;p13) with telomere involvement of 20p in a case of longstanding myelodysplastic syndrome