t(6;17)(p21;p13) and acquisition of the Philadelphia chromosome translocation with p190 BCR-ABL1 transcript during the course of myelodysplastic syndrome

Preleukaemia
+ The patient had thrombocytopenia for 10 years (platelet counts ranged between 70x106/L to 130x106/L, for what he had never received any treatment.
Malignant disease
-
Inborn condition
-
Main items
-

Date diagnosis
08-2011
Treatment
After the patient was diagnosed with MDS, therapy with decitabine was administrated but the patient remained cytopenic. At progression chemotherapy combined with imatinib (400 mg/day) was administrated that was escalated to 800 mg/day two weeks later.
Complete remission
-
Status
A
Date last follow
04-2012
Survival
7+ The patient had traveled to his native country for further treatment.

Technics
Molecular studies were performed from total RNA extracted from the bone marrow sample using the TriZol LS reagent (Invitrogen, US) according to the manufacturer s recommendations. cDNA was prepared from 2μg of total RNA with the Superscript II cDNA Synthesis Kit (Invitrogen, US) according to manufacturer s instructions.
Results
Quantitative molecular studies performed with GeneXpert (Cepheid, US) were negative for the major BCR/ABL1 transcript. The absence of p210 BCR-ABL1 transcript was confirmed by reverse transcription-polymerase chain reaction analysis; however it showed breakpoint cluster region rearrangement between exons e1 and a2, compatible with the minor p190 BCR/ABL1 transcript. 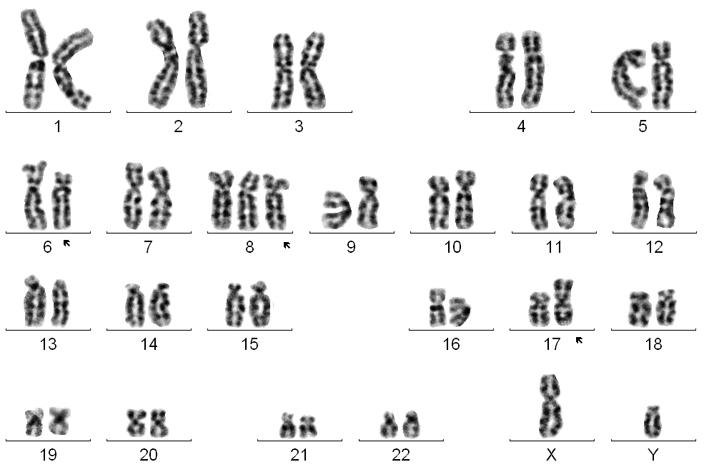 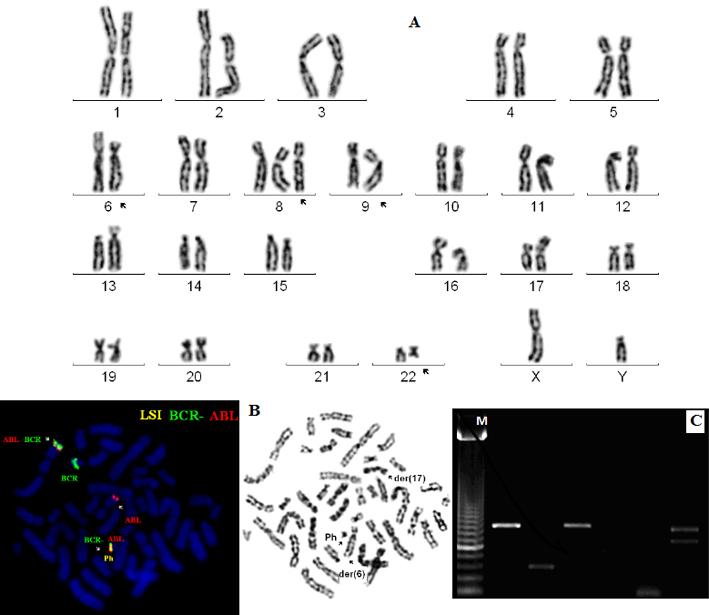 Comments
We described a rare t(6;17)(p21;p13) (La Starza et al., 26) in a patient diagnosed with myelodysplastic syndrome that terminated in AML associated with acquisition of the Philadelphia chromosome translocation and the p190 BCR-ABL1 transcript. The patient initially had thrombocytopenia for 10 years, but developed MDS and at that time karyotyping revealed the chromosomal translocation t(6;17)(p21;p13) associated with an extra chromosome 8. The initial myelodysplastic syndrome terminated to acute myeloid leukemia, accompanied by an appearance of a new clone, characterized by a Philadelphia chromosome. Reverse transcription-polymerase chain reaction analysis further revealed the presence of the minor p190 BCR-ABL1 transcript. Developing a Philadelphia chromosome, considered a primary anomaly, during the course of MDS is extremely rare phenomenon, described only in few patients (Melo et al., 1994; Onozawa et al., 2003; Advani et al., 2004; Keung et al., 2004). Our study illustrates that the Ph translocation may develop from an existing MDS clone, accompanying or perhaps inducing disease transformation. The availability of preleukemic MDS phase in our patient offers an unique opportunity to analyze the role of BCR-ABL1 in leukemogenesis and the evolution of leukemia clones in hematological malignancies.

t(6;17)(p21;p13) and acquisition of the Philadelphia chromosome translocation with p190 BCR-ABL1 transcript during the course of myelodysplastic syndrome