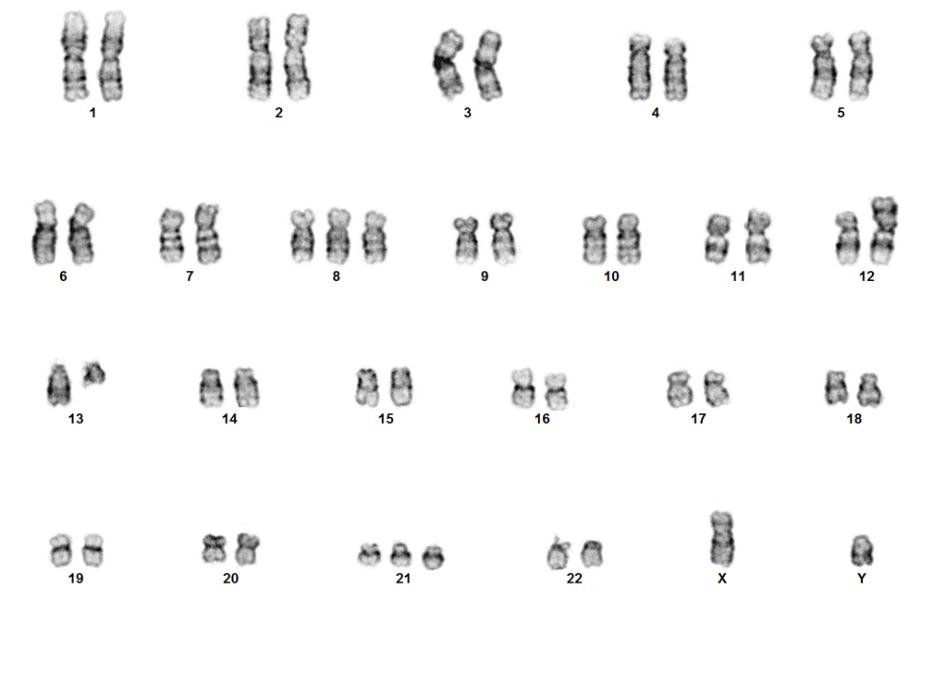 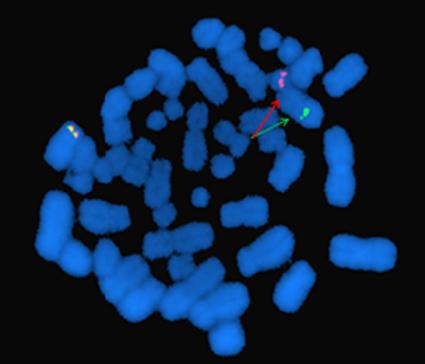 Comments
The t(12;13)(p13;q12) is very rare in hematological malignancies with only 14 cases including the present case have been reported [Table 1]. Six cases were diagnosed with myeloproliferative neoplasms with eosinophilia (MPNeo), five had AML, and the remaining three were pediatric ALL [see Table1 for references]. Molecular characterization of the t(12;13) breakpoints revealed the rearrangement of ETV6/12p13 gene in 9/14 cases. On the other hand, FLT3 gene was implicated as the involved partner gene on chromosome 13 in five cases. All five were diagnosed with MPNeo, nevertheless the disease was rapidly fatal in three patients [Table 1]. FTL3 encodes a member of the receptor tyrosine kinase subclass III family of receptors, which is expressed in early hematopoietic progenitor cells (Gilliland & Griffin, 2002; Stirewalt & Radich 2003). Mutations in FTL3 gene are found in approximately 30% of AML cases, yet this gene is rarely involved in translocations. Vu et al reported the first case of t(12;13)(p13;q12) in MPNeo, with the translocation resulting in the creation of an ETV6-FLT3 fusion gene. Reciprocal ETV6/FLT3 and FLT3/ETV6 transcripts were detected by RT-PCR; however, at the protein level, only ETV6/FLT3 was expressed in the patient's leukemic cells (Vu et al, 2006). The putative oncogenic function gained as a result of the ETV6-FLT3 fusion is the constitutive activation of the tyrosine kinase domains of FLT3. One case of t(12;13)(p13;q12)-related AML involving a ETV6-CDX2 fusion has been described as well (Chase et al, 1999). Although FISH results in the present case revealed the involvement of ETV6 gene in the t(12;13) translocation, it is unknown whether a specific gene may have been affect at the 13q12 locus.Unlike FLT3 gene, ETV6/12p13 translocations is commonly detected in a wide spectrum of hematological malignancies lymphoid and myeloid; with at least 48 chromosomal bands and 30 ETV6 partner genes have been reported. The chimeric oncoprotein resulted from the t(12;13) may have a therapeutic implications. Although the ETV6-FLT3 positive leukemia has shown some sensitivity to FLT3 inhibitors, more cases are needed to appreciate the response.Table 1; Clinical data on patients reported with t(12;13)(p13;q12)ALL: F; female: M; male; acute lymphoblastic leukemia; AML: acute myeloid leukemia; CR: complete remission; MDS-RAEB: myelodysplastic syndrome with refractory anemia and excess blasts; MPN-eo: myeloproliferative neoplasms with eosinophilia; NR: not reported; PTCL: peripheral T-cell lymphoma; Y: years.