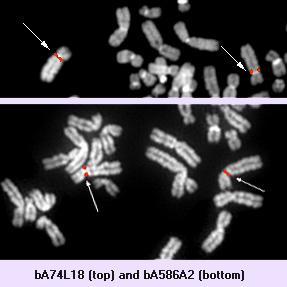 976 aa; 145 kDa; type III receptor tyrosine kinase; glycoprotein; contains an extracellular domains with 5 Ig-like loops, a highly hydrophobic transmembrane domain (23 aa), and an intracellular domain with tyrosine kinase activity split by a kinase insert (KI) in an ATP-binding region and in the phosphotransferase domain. Tr-KIT does not contain the whole kinase domain and is therefore kinase inactive. 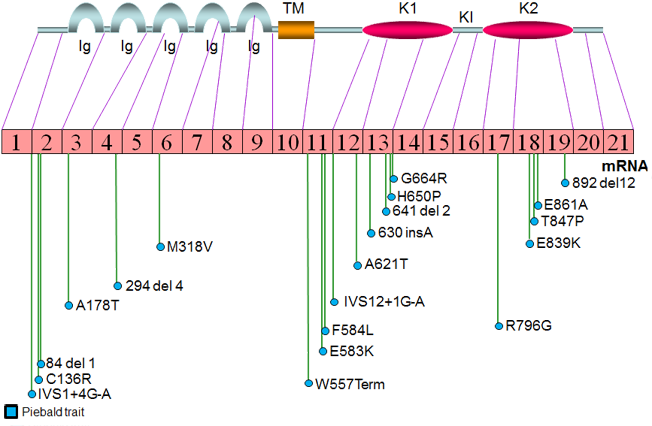 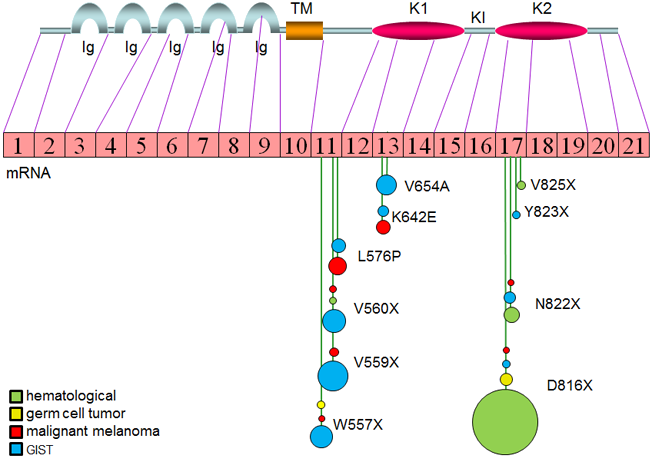 Entity name
Piebaldism
Disease
Autosomal dominant disorder of pigmentation; loss of function abnormalities of the KIT gene have been demonstrated in 59% of the typical patients.
Entity name
Familial Gastrointestinal Stromal Tumors and sporadic gastrointestinal stromal tumors (GISTs)
Disease
GISTs are the most common mesenchymal tumors in the human digestive tract; they originate from KIT-expressing cells (ICCs). All GISTs express KIT which is frequently (80-85% of the cases) mutated in exon 11 encoding the juxtamembrane domain. However, also mutations in exon 9 (encoding the extracellular region) and 17 (encoding a region around the activation loop in the kinase domain) have been found. Most GIST cells produce SCF thus establishing autocrine stimulation.
Entity name
Systemic Mast Cell Disease (SMCD)
Disease
Mast cell hyperplasia in the bone marrow, liver, spleen, lymph nodes, gastrointestinal tract and skin; gain of function mutations are detected in most patients. About 90% of patients with systemic mastocytosis have mutation in exon 17 in KIT, often Asp-816 is replaced with Val. In children with systemic mastocytosis the frequency of KIT mutations in exon 17 is lower (about 40%), but mutations in other KIT regions are found in 40% of the children, for example mutation in exon 8 and 9 (encoding Ig-like domain 5 in the extracellular region of KIT).
Prognosis
The prognosis depends on the four clinical entities recognized: indolent form, form associated with hematologic disorder, aggressive SMCD and mast cell leukemia; leukemic transformation with mast cell involvement is characterized by rapid progression of disease with a survival time less than 1 year
Oncogenesis
clinical features of malignant hematopoietic cell growth are influenced by the time, the location of c-kit mutative events, and the number of associated lesions.
Entity name
Small Cell Lung cancer (SCLC)
Disease
KIT overexpression is found in 70% of SCLC patients. Co-expression ofKIT and SCF has been found to create an autocrine loop. The prognostic value of KIT expression is not clear.
Entity name
Testicular Carcinoma
Disease
Activating mutations in KIT exon 17 is found in about 25% of seminomas. Often Asp-816 is replaced with a Val or His residue.
Entity name
Melanoma
Disease
KIT is important for the development of melanocytes. The about 80% of melanomas contain BRAF mutations, but a subset contain activating KITmutations. Interestingly in acral melanomas (affecting foot soles or palms) there is a higher frequency of tumors with activating KIT mutations (20-25% of cases). Examples of KIT mutations found in melanoma are L576P (in exon 11) and K642E (in exon 13). Mutation in position 816 (in exon 17) has also been observed but is not so frequent occurring.
Entity name
Acute Myeloid Leukemia
Disease
KIT expression can be found in about 85% of AML cells. KIT activation can occur by different mechanisms: 1) co-expression of SCF causing an autocrine loop 2) activating mutations in exon 17 affecting Asp-816 or Asn-822. Interestingly, KIT mutations occurs primarily in a subset of leukemias containing inv(16) or t(8;21), so-called core factor binding AML. Apart from exon 17 mutations, also internal tandem duplications in exon 11 have been described.
Prognosis
Presence of D816V mutation in KIT is a poor prognostic factor.