CCDC6 gene product is a pro-apoptotic protein substrate of ATM whose loss or inactivation enhances tumor progression. In primary tumors the impaired function of CCDC6 protein has been ascribed to CCDC6 rearrangements, to somatic mutations and to CCDC6 different levels in several neoplasia. The CCDC6 turnover is regulated in a cell cycle dependent manner upon post-translational modification events. The impairment of CCDC6 turnover may affect cells behaviour and drug response.

The CCDC6 gene (Coiled Coil Containing 6) has been identified upon its frequent rearrangement with the RET proto-oncogene in papillary thyroid carcinomas (Fusco et al., 1987; Grieco et al., 1990), and with genes other than RET in solid and not solid tumours (Drechsler et al., 2007). Recently, by using an integrated molecular- and histopathology- based screening, the fusion CCDC6/RET has been also detected in lung adenocarcinoma, even at low frequency (Takeuchi et al., 2012).
The CCDC6 gene is located on the long arm of chromosome 10 (10q21), and contains 9 exons that encode a transcript of 3 Kb showing an open reading frame (ORF) of 475 aa. The CCDC6 gene promoter, localized within 259 bp upstream of the ATG site, drives the gene expression ubiquitously in various human tissue (Tong et al., 1995). In tumors harboring the RET/PTC1 rearrangement, the activation of RET involves chromosomal inversion of the long arm of chromosome 10 that juxtaposes the tyrosine kinase-encoding domain of RET, mapped at 10q11.2, to the promoter and the first exon of the CCDC6 gene, originally named H4(D10S170) (Pierotti et al., 1992).

474 amino acid coiled coil protein. Its predicted amino-acid (aa) sequence contains a long coiled coil region and a putative binding domain for SH3-proteins, suggesting its possible involvement in protein-protein interactions (Grieco et al., 1994). CCDC6 gene product shows extensive regions of alpha helices which have a high potential to adopt a coiled-coil conformation. Coiled-coils are formed by two or three alpha-helices that are strongly amphipathic and supercoil around each other, crossing at an angle of about 20- (Lupas et al., 1991). It has been demonstrate that such region can be involved in protein dimerization or oligomerization. CCDC6 protein is an ubiquitously expressed 65 KDa nuclear and cytosolic protein phosphorylated by ERK1/2 at serine 244 upon serum induction (Grieco et al., 1994; Celetti et al., 2004). In the last years, several large-scale phosphorylation site-mapping studies have recognized CCDC6 as a phosphoprotein (Beausoleil et al., 2004; Brill et al., 2004) (Figure 1).
CCDC6 has been recognized as a pro-apoptotic protein, while the CCDC6 protein truncated at the carboxyterminus, such as in the fusion with different oncogenes, acts as dominant negative on nuclear localization and apoptosis induced by the wild-type protein (Celetti et al., 2004). CCDC6 is phosphorylated at T434 by the ATM kinase that stabilizes the protein in the nucleus in response to DNA damage. The loss of the CCDC6 region recognised by ATM kinase or the full protein deficiency determines an increase in cell survival, allows for DNA synthesis and permits cell to progress into mitosis, following the exposure to genotoxic stress (Merolla et al., 2007).
CCDC6 gene product undergoes multiple post-translational modifications such as sumoylation (Luise et al., 2012), ubiquitination (Povlsen et al., 2012; Morra et al., 2015), and phosphorylation (Celetti et al., 2004; Beausoleil et al., 2004; Brill et al., 2004; Morra et al., 2015), suggesting that CCDC6 protein activity is highly regulated (Figure 3). 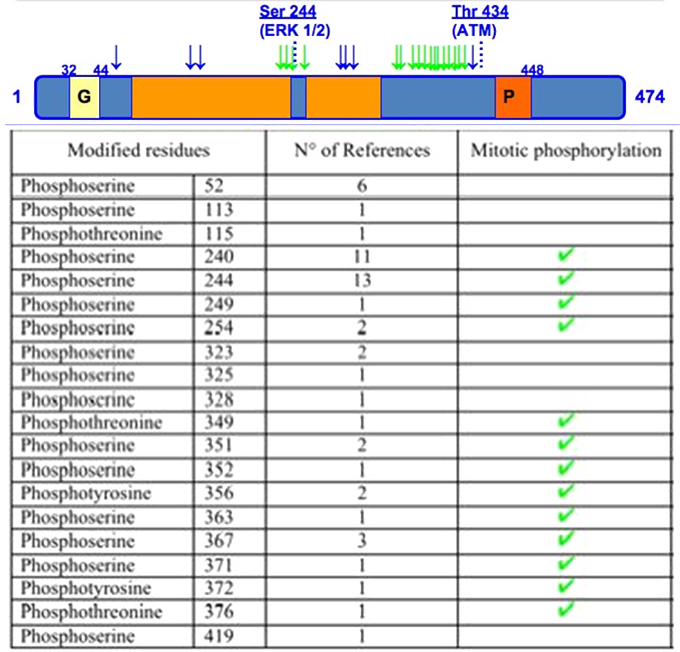 Proapoptotic and cell cycle regulated protein, involved in DNA damage and repair.
Further supporting a role of CCDC6 in control of cell proliferation, it has been reported that CCDC6 interacts with CREB1 and inhibits its cAMP-dependent transcriptional activity (Leone et al., 2010) in a SUMO-dependent manner (Luise et al., 2012). Interestingly, CCDC6 knock-in mice develop thyroid hyperplasia associated to an enhanced CREB1 activity (Leone V et al., 2015), supporting a likely role of the haploinsufficiency of CCDC6 expression in the development of thyroid papillary carcinomas carrying the RET/PTC1 rearrangements.
High-throughput proteomic screening predicted the interaction between CCDC6 and the catalytic subunit of Protein Phosphatase 4 (PP4c) (Ewing et al., 2007) that has been confirmed in vitro and in vivo (Merolla et al., 2012). Moreover, it has been demonstrate that cells depleted of CCDC6 have an enhanced phosphatase activity directed toward the phosphorylation of the H2AX protein in response to ionizing radiation (IR). Loss of CCDC6 also affects the DNA damage induced G2 arrest, promoting the overcome of G2/M checkpoint. Furthermore, loss of CCDC6 affects the DNA repair mechanisms in G2 and increases the levels of the error prone mechanism of repair, Non Homologous End Joining, (NHEJ ) (Merolla et al., 2012). In recent studies it has been reported that the E3 ubiquitin ligase FBXW7 specifically interacts with CCDC6 driving its degradation in a proteasomal dependent manner (Zhao et al., 2012). Moreover, CCDC6 degradation is impaired in response to DNA damage. The post translational events that regulate the phosphorylation status and the abundance of CCDC6 during the cell cycle have been also investigated (Morra et al., 2015a).
In human cancers, it has been recently reported that the loss of CCDC6 in the Testicular Germ Cell Tumors (TGCTs) might aid the spermatogonial cells to benefit from a pro-survival pathway in order to evade the toxic effects of endogenous oxidants and then promote testicular neoplastic growth (Staibano et al., 2013). Furthermore, in NSCLC, TMA immunostaining for CCDC6 revealed low CCDC6 expression in about 30% of the NSCLC analyzed (45 out of 138), besides the low penetrance of reported CCDC6 mutations or CCDC6/RET rearrangements. The defective expression of CCDC6 in NSCLC has been negatively correlated to DFS and OS (Morra et al., 2015b). Moreover, the defective expression of CCDC6 causes an impairment of DNA repair by homologous recombination (HR) in NSCLC cells, making these cells sensitive to PARP inhibitors. Finally, it has been reported that beside the CCDC6 sporadic mutations, molecular alterations in CCDC6 modifiers, such as Fbxw7 E3 ubiquitin ligase or USP7 de-ubiquitinating enzyme, may also account for the impairment of the CCDC6 turnover and may be critical in optimizing personalized therapy. About 20% of primary NSCLC exhibit reduced USP7 expression and also show barely detectable levels of CCDC6 that may increase their sensitivity to PARP inhibitors (Morra et al., 2015a). Therefore, the indication of CCDC6 as a novel USP7 substrate provides the rational for novel personalized therapy in NSCLC patients carrying USP7 deficiency.
Therefore, as the loss of CCDC6 causes an impairment of DNA repair by homologous recombination, in tumors that harbor low levels of USP7, the detection of low levels of its substrate CCDC6 should provide the indications for the PARP inhibitors treatment (Morra et al., 2015b). 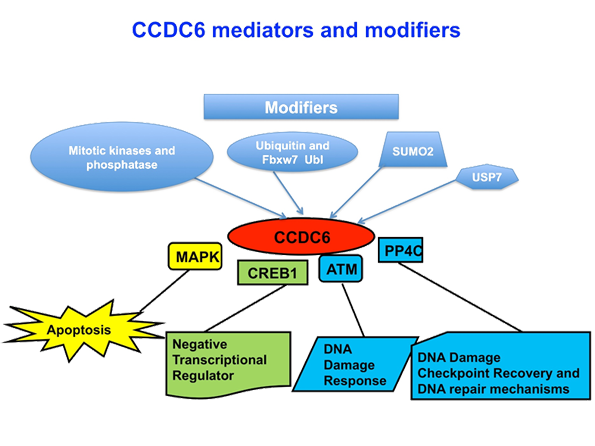 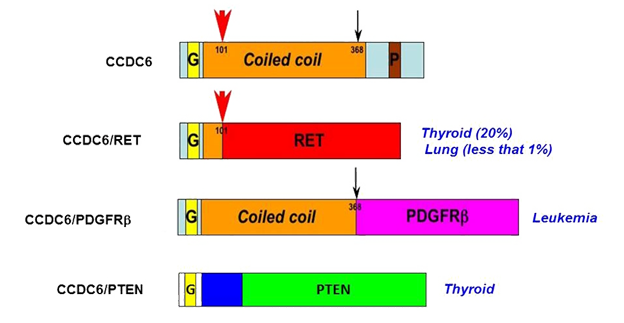 Fig. 3 : CCDC6 rearrangements. The red arrow shows the RET/PTC1 and the black one shows the CCDC6/PDGFRB breakpoint. 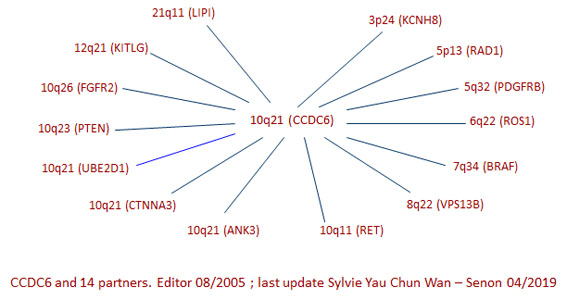