The RI alpha gene is composed of 10 coding exons of varying lengths, separated by introns, giving the gene a total length of at least 21 kb.

By alternative splicing, the PRKAR1A gene encodes 3 types of transcripts that all translate in the same protein. 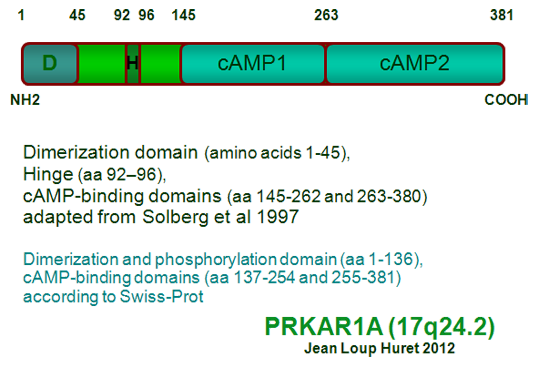 48 kDa ; contains two tandem cAMP-binding domains at the C-terminus and the dimerization domain at the N-terminus that serves also as a docking site for A Kinase Anchoring Proteins (AKAPs). 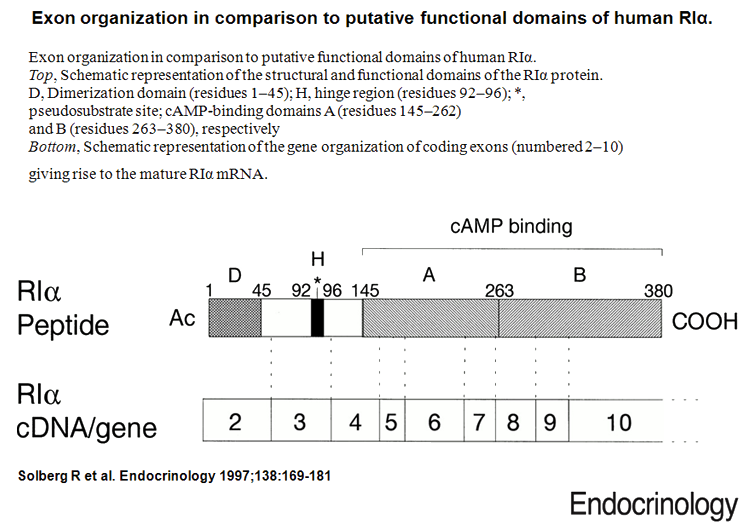 Most mutations are null alleles; they are dispersed throughout the coding region of the gene.

Many of tumors that develop in patients with Carney complex and PPNAD (see below) show loss of heterozygosity; somatic mutations in the PRKARIA gene have been reported in three cases of sporadic adrenocortical tumors.

Entity name
Carney complex syndrome, type I
Disease
A multiple neoplasia syndrome characterized by spotty skin pigmentation, cardiac and other myxomas, endocrine tumors, psammomatous melanotic schwannomas and some other tumors.
Prognosis
According to the severity of the disease in a given patient, and to the quality of a regular follow up; life span is decreased in patients with CNC. 57% of the deaths are due to heart related causes; others due to the postoperative complications or evolution of the malignant process; presymptomatic diagnosis improves survival data and might prevent earlier the main causes of death in this disease.
Cytogenetics
Limited data; some of myxomas and PPNAD from CNC patients showed telomeric associations, dicentric chromosomes, aneuploidy, polyploidy and chromosomal rearrangements.
Hybrid gene
Half of CNC patients show PRKARIA mutations.
Oncogenesis
PRKARIA is frequently affected by bi-allelic inactivation in tumors of CNC patients. However 1 kindred was described where a splice site mutation led to exon 6 skipping and an expressed shorter PRKAR1A protein. The mutant protein was present in patients leukocytes and tumors, and in vitro studies indicated that the mutant PRKAR1A activated cAMP-dependent PKA signaling at the nuclear level. Along with the lack of allelic loss at the PRKAR1A locus in most of the tumors from this kindred, these data suggested that alteration of PRKAR1A function, not only its complete loss, is sufficient for augmenting PKA activity leading to tumorigenesis in tissues in patients with CNC.
Entity name
PPNAD - Primary pigmented nodular adrenocortical disease Primary pigmented nodular adrenocortical disease
Disease
PPNAD is a cause of ACTH-independent Cushings syndrome. This condition can be difficult to diagnose because hypercortisolism may be periodic and adrenal imaging may not demonstrate an adrenal tumor.
Hybrid gene
Inactivating PRKAR1A germline mutations are frequent in sporadic and isolated cases of PPNAD.
Oncogenesis
Both alleles are frequently inactivated. The wild-type allele can be inactivated by somatic mutations, consistent with the hypothesis of the gene being a tumor suppressor gene.
Entity name
Adrenocortical tumors, sporadic
Disease
Patients frequently present with ACTH-independent Cushings syndrome.
Hybrid gene
Somatic mutations in the PRKAR1A gene were identified in 3 cases of sporadic adrenocortical tumor. All 3 mutations predicted premature termination of the protein. 17q23-24 loss-of-heterozygosity is a frequent event in adrenal carcinomas.
Oncogenesis
Haploinsufficiency of PRKARIA and a reversal of the ratio of R1A to R2B have been proposed to cause tumorigenesis, at least in some cases.
Entity name
Myxoma, intracardiac
Disease
Benign neoplasms that occur in 7 per 10,000 individuals. These slowely proliferating lesions arise from subendocardial pluripotent primitive mesenchymal cells, which can differentiate within myxomas along a variety of lineages including epithelial, hematopoietic, and muscular.
Prognosis
Life span is decreased in patients with myxomas. Morbidity and mortality are the result of embolic stroke, heart failure due to intracardiac obstruction, and rheumatologic symptoms attributed to myxoma-mediated production of IL-6.
Cytogenetics
Limited data; 15 cases of myxomas contained clonal numerical and structural abnormalities including telomeric associations.
Hybrid gene
Mutations of PRKARIA detected in the coding region of the gene, exons 5, 7 and 8.
Oncogenesis
No somatic mutations were detected in cardiac myxomas; haploinsufficiency of PRKARIA and a reversal of the ratio of RIA to R2B have been proposed may contribute in tumorigenesis.
Entity name
Papillary thyroid carcinoma
Cytogenetics
Reciprocal translocation between chromosomes 10 and 17
Hybrid gene
RET/PTC2 is formed by the fusion of the RET tyrosine kinase domain with part of the RI-alpha regulatory subunit
Fusion protein
RET/PTC2
Oncogenesis
The fusion of the RET tyrosine kinase domain with a portion of the RIA gene leads to the expression of RET in the thyroid cells, where it is normally transcriptionally silent. 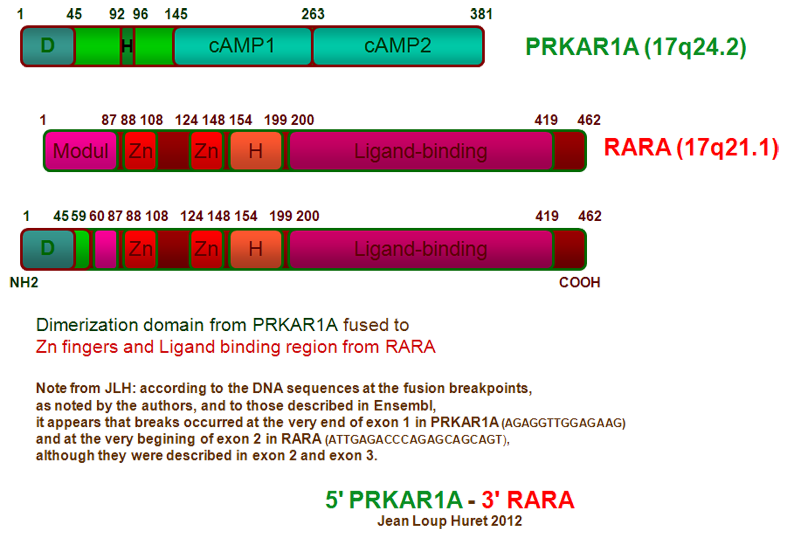