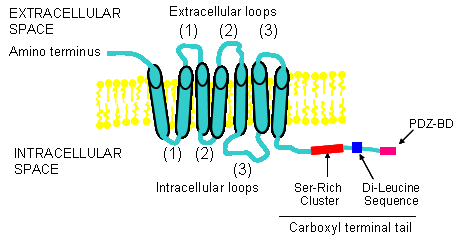 Figure of the LPAR1, a G protein-coupled receptor, spanning the plasma membrane seven times. The receptor has three numbered extracellular and intracellular loops that are involved in signal transduction. Also shown are the amino terminus and carboxyl terminal tail.
Three regions of the carboxyl terminal tail have been shown to be important for the LPAR1 signaling and receptor regulation. LPAR1 contains a canonical Type 1 PDZ binding domain (a.a. 362-364) at the extreme C-terminus. This domain has been shown to be required for LPA-induced cell proliferation and activation of Rho family GTPases via PDZ-Rho guanine nucleotide exchange factors. Further upstream in the carboxyl terminal tail, LPAR1 contains a di-leucine sequence (a.a. 351 and 352), which is required for phorbol ester-induced internalization. Still further upstream lies a serine-rich cluster (a.a. 341-347) that is required for beta-arrestin association, which is critical for signal attenuation and receptor endocytosis.

LPAR1 is an abbreviation for the LPA1 receptor, the first receptor cloned and identified from a growing number of LPA receptors that includes the Edg-family and the purinergic receptors.

It is a requirement of G protein-coupled receptor functioning that receptors are embedded into membranes for proper structure. The LPAR1 spans the plasma membrane seven times in a barrel conformation with three extracellular and three intracellular loops. At steady state, LPAR1 is located on the plasma membrane at the cell surface until it binds LPA, which triggers dynamin2-dependent, clathrin-mediated endocytosis into the cell. LPAR1 requires membrane cholesterol for association with beta-arrestin, which targets the receptor to clathrin-coated pits for internalization. In addition to LPA, phorbol ester stimulation of protein kinase C also induces internalization of LPAR1, but this does not require beta-arrestin. Rather, phorbol ester-dependent internalization of LPAR1 requires AP-2 clathrin adaptors. The LPAR1 is subsequently sorted through Rab-5 dependent early and recycling endosomes before it is recycled back to the cell surface or degraded in lysosomes.
The receptor may also be localized to the nuclear membrane in the cell. Some evidence indicates that a portion of the total cellular LPAR1 localizes to the nuclear membrane in PC12 cells, micro-vascular endothelial cells, and human bronchial epithelial cells. The exact function of this nuclear LPAR1 pool is not known.

The LPAR1 binds LPA and initiates G protein-dependent signal transduction cascades throughout the cell that result in a number of functional outcomes, depending on the specific cell or tissue type. The G alpha proteins involved are Gi, Gq and G 12/13.
The receptor has critical functions that have been elucidated through gene knock-out studies in mice. LPAR1-null mice have deficiencies in olfactory development that impairs their ability to locate maternal nipples and initiate suckling required for survival. The lack of olfactant detection leads to 50% lethality among pups. Other LPAR1-null mice demonstrate alterations in neurotransmitters that mimic models of schizophrenia. LPAR1-null mice are 10-15% shorter than wild-type mice and have gross anatomical defects due to bone development, including incisor overgrowth that affects ability to feed.
The LPAR1 functions in normal cortical development and commits cortical neuroblasts to differentiate through the neural lineage. It may also play a role in the formation of dendritic spine synapses.
Through autotoxin-generated LPA, LPAR1 mediates neuropathic pain induced by nerve injury.
Activation of the LPAR1 functions in the inflammatory response; receptor activation stimulates the recruitment of macrophages.
The LPAR1 positively regulates motility in a variety of cell types, exerting a dominant signal in the absence of LPAR4.

Entity name
Various cancers
Note
Overexpression of the LPAR1 in mice contributes to the tumorigenicity and aggressiveness of ovarian cancer.
Prognosis
Upregulation of the LPAR1 appears to enhance tumor progression in the previous examples.
Oncogenesis
The LPAR1 is a proto-oncogene contributing to the metastatic potential of breast cancers and may require signals from ErbB2/HER2 dimerization. In a study designed to assess the functional consequences of overexpression as it relates to breast carcinogenesis, 1000 selected/suspected cDNAs were inserted into immortalized MCF-10A cells and a derivative cell line, MCF-10A.B2 expressing an inducibly active variant of ErbB2. The study examined three assays (cell proliferation, migration and 3-D matrigel acinar morphogenesis) and the LPAR1 scored positive in all three; thus, it was determined to be a proto-oncogene in this disease. Several observations are of interest: first, the LPAR1 induced migration in the absence of ErbB2 activation but not in the absence of dimerization which suggests that the LPAR1 may require weak signals from ligand-independent dimerization of ErbB2 to induce migration; second, in the acinar morphogenesis assay, phenotypical changes of cells with the LPAR1 included the formation of features of invasive tumor cells, such as disorganized acinar structure, large structures and protrusive behavior; third, the LPAR1 was capable of establishing abnormal 3-D morphogenesis in the absence of conditions to dimerize ErbB2.
Entity name
Lung injury
Note
The LPAR1 mediates fibroblast migration and recruitment in the injured lung. The chemotactic activity of fibroblasts is dependent on LPAR1 expression.
Disease
Pulmonary fibrosis
The concentration of LPA is elevated in bronchoalveolar lavage samples from patients with idiopathic pulmonary fibrosis. The fibroblasts of these patients require expression of LPAR1 for the chemotactic activity present in this pathology. Data suggests that LPAR1-null mice are substantially protected from fibroblast accumulation. This corresponds to lung injury where aberrant wound-healing responses exacerbate pulmonary fibrosis pathogenesis.
Prognosis
LPAR1 links lung injury with pulmonary fibrosis development.