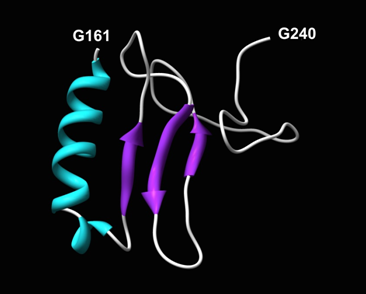 IGFBP-6 belongs to the insulin-like growth factor binding protein family. It is expressed as a 240 amino acid proprotein, and processed to a 213-216 amino acid mature protein. It consists of 3 domains: the N- and C-terminal domains, which contain internal disulfide bonds, are joined by a linker domain. It contains 8 disulfide bonds, 5 in the N-terminal IGFBP domain and 3 in the C-terminal domain (Neumann et al., 1998; Neumann and Bach, 1999). Of these, the first 3 N-terminal disulfides are unique, whereas the remaining 2 N-terminal and 3 C-terminal disulfides are homologous with other IGFBPs. A peptide based on the N-terminal subdomain is largely unstructured (Chandrashekaran et al., 2007), whereas the IGF binding subdomain is conserved with other IGFBPs. Human IGFBP-6 is O-glycosylated on 5 Ser/Thr residues within the linker domain, which has a distinct sequence from other IGFBPs (Bach et al., 1992; Neumann et al., 1998). The C-terminal domain contains a thyroglobulin type 1 fold (Headey et al., 2004), which is also true for other IGFBPs, and a functional nuclear localization sequence (Iosef et al., 2008).

Unlike other IGFBPs, IGFBP-6 has a ~50-fold binding preference for IGF-II over IGF-I. It therefore is a relatively specific inhibitor of IGF-II actions (Bach, 1999; Bach, 2005; Bach et al., 2013). It is antiproliferative and proapoptotic in a number of cell lines in vitro (Bach, 1999; Bach, 2005; Bach et al., 2013). At least some of its actions in regulating cell fate are mediated by interaction with Ku80, a DNA-end binding protein (Iosef et al., 2010). IGFBP-6 has also been reported to have IGF-independent actions, such as promotion of cancer cell migration an IGF-independent mechanism that involves binding prohibitin-2 (Fu et al., 2007; Fu et al., 2013) and angiogenesis (Zhang et al., 2012). It has been reported to be a tumor suppressor in nasopharyngeal cancer through regulation of EGR-1 expression (Kuo et al., 2010).
As well as binding IGFs with high affinity, IGFBP-6 also binds other unrelated proteins, including importin-α, prohibitin-2 and Ku80 as described above. Other proteins that bind IGFBP-6 inhibits osteoblast differentiation, which may be mediated by binding to LIM mineralization protein-1 (LMP-1) (Strohbach et al., 2008), the vitamin D receptor (Cui et al., 2011), and the thyroid hormone-α receptor (Qiu et al., 2012).
Global deletion of IGFBP6 expression does not result in a major phenotype, presumable because of functional redundancy with other IGFBPs.

IGFBP-6 shares homology with IGFBPs 1-5 in its N-terminal IGF binding domain and its C-terminal domain. It shares homology in its C-domain with other proteins containing a thyroglobulin type 1 fold.
IGFBP-6 is found in mammalian species including man, cow, rat and mouse, as well as trout and salmon. The IGFBP6 gene is duplicated in zebrafish, and each gene has a distinct expression pattern; however, overexpression of either gene inhibits embryonic growth and development (Wang et al., 2009).

Entity name
Various cancers
Note
In many studies, IGFBP-6 expression is lower in (1) malignant vs normal cells; and (2) metastatic vs primary tumors, suggesting that it has an inhibitory effect on tumor development, at least in part by inhibiting IGF actions. Examples include rhabdomyosarcoma, head and neck cancer, lung cancer and gastric cancer (Bach et al., 2013). Exogenously added or overexpressed IGFBP-6 inhibits rhabdomyosarcoma and neuroblastoma xenograft growth in mice (Grellier et al., 1998; Gallicchio et al., 2001). IGFBP6 has been implicated as a tumor suppressor in nasopharyngeal cancer by its role as a transcription factor for EGR-1 (Kuo et al., 2010).
Entity name
Chronic renal failure
Note
Circulating IGFBP-6 levels are increased in patients with chronic renal failure (Powell et al., 1997; Van Doorn et al., 1999) and this, together with increased levels of other IGFBPs, may contribute to impaired IGF action in these patients.
Entity name
Proliferative vitreoretinopathy
Note
IGFBP-6 levels are increased in serum and vitreous from patients with this condition, and serum levels decreased after vitrectomy (Yu et al., 2014).
Entity name
Non islet-cell tumor hypoglycemia
Note
This rare condition is due to overexpression by tumors of a partially processed form of IGF-II that does not form normal serum complexes with IGFBPs and the acid-labile subunit and therefore has increased bioavailability. IGFBP-6 levels are increased in this condition (Van Doorn et al., 1999).