NDRG1 was mapped to human chromosome 8q24 and consists of 64,851 basepairs, starting at basepair 133,237,171 and ending at basepair 133,302,022 from the p-terminus. It is a member of the NDRG family, consisting of NDRG1, NDRG2, NDRG3 and NDRG4 (of which three isoforms exist: NDRG-4B, NDRG-4Bvar and NDRG-4H), which are part of the alpha/beta hydrolase superfamily. The members of the NDRG family share 52-65% amino acid identity. The promoter region of all NDRG family members contain CpG islands (Bandyopadhyay et al., 2004). NDRG1 downregulation has been correlated with DNA hypermethylation in some types of human cancer and cell lineages such as prostate, breast and gastric and also in sclerosis-affected brains (Li et al , 2015; Huynh et al , 2014; Han et al , 2013; Chang et al , 2013).

The DNA of NDRG1 contains 16 exons, see diagram for details about their location. The DNA encodes a 3.0 kb mRNA with a coding region of 1.185 kb.

NDRG1 is a ~ 43 kD protein, composed of 394 amino acids, with an iso-electric point of 5.7. NDRG1 has an alpha/beta hydrolase-fold motif, however, without a hydrolytic catalytic activity required to function as hydrolases. The protein has no apparent transmembrane domain (Kokame et al, 1996). NDRG1 has several phosphorylation sites, among others a phosphopantetheine attachment site, protein kinase C, casein kinase II, tyrosine kinase, protein kinase A and calmodulin kinase II. Experimental studies have demonstrated that NRDG1 is phosphorylated by Protein Kinase A and Calmodulin kinase II, and is also a physiological substrate of SGK1 and GSK-3-beta kinase (Figure 1), a kinase involved in cancer growth and progression. he C-terminal region of NDRG1 (residues 339-369) possess three tandem repeats of 10 amino acids, GTRSRSHTSE, (Zhou et al, 2001) not present in the other members of the NDRG family. These repeats with a histidine located between serine and threonine residues act as a binding site for metal ions such as nickel and copper (Zoroddu et al, 2001) (Figure 1). NDRG1 is also target for SOMOylation, preferentially by SUMO-2 isoform, in an acceptor site in residue Lys14. This modification does not affect the subcellular localization of NDRG1 but the protein stability by increasing protein ubiquitination and degradation (Lee and Kim, 2015) (Figure 1). 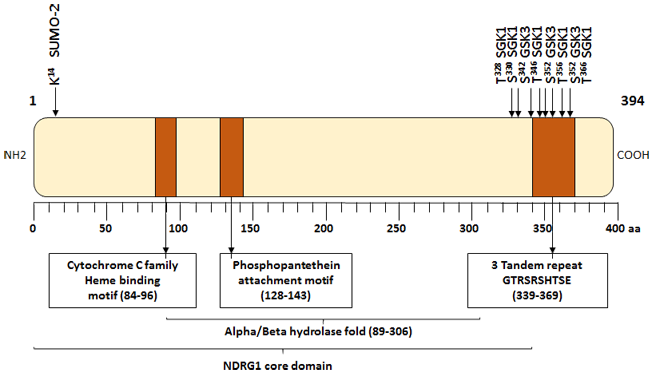 NDRG1 is relatively ubiquitously expressed in normal human cells, and especially highly expressed in prostate, brain, kidney, placenta, ovarian, thyroid, testicular and intestinal cells. NDRG1 is mostly found in epithelial cells. NDRG1 expression has been shown to be controlled by promoter CpG island methylation and histone acetylation. In addition, several transcription factors have been implicated in the NDRG1 transcriptional regulation, including homo- and heterodimers of MYC, MYCN and MAX, androgen receptor (AR), TP53, and HIF1A.

NDRG1 is primarily a cytoplasmic protein. 47.8% of the NDRG1 is expressed in the cytosol, 26.1% in the nucleus (such as in prostate epithelial cells), and 8.7% in the mitochondria (such as in proximal tubule cells in the kidney). NDRG1 is also found in the adherens junctions. Additionally, in intestinal and lactating breast epithelia NDRG1 is located in the plasma membrane. NDRG1 can also be found in vacuoles, the peroxisome, early and recycling endosomes, and the cytoskeleton.

The exact function of NDRG1 is still unclear. The expression of all members of the NDRG1 family has been correlated with different stages of differentiation from birth to adulthood. NDRG1 has been reported to be involved in different biological processes as cell proliferation, differentiation, development, and stress response (Ellen et al., 2008).
There is evidence that NDRG1 expression peaks in the G1 and G2/M phases, and is lowest in the S phase, and that this regulation might be associated to cell growth and differentiation. In fact, NDRG1 has been shown to up regulates p21/WAF1 (Kovacevic et al, 2013) and NDRG1 expression is downregulated under conditions of increased cell proliferation. NDRG1 is also described as a microtubule-associated protein, which may play an important role in maintaining spindle structure during cell division.
The function of NDRG1 may be controlled at least in part by phosphorylation. Phosphorylation at residues Ser330 and Thr346 by SGK-1 is involved in NF-κB signaling pathway inhibition probably affecting cell survival (Murakami et al, 2010).
NDRG1 has also been identified as a stress response gene, upregulated by homocysteine and hypoxia. Hif-1-dependent and independent mechanisms have been implicated in NDRG1 induction. It is also controlled by AP-1 transcription factors. When exposed to stress, for example hypoxia, NDRG1 may play a cytoprotective role in normal healthy cells.
NDRG1 is upregulated during colon epithelial cell differentiation. It is positively or negatively regulated by hormones such as androgens and estradiol, respectively. Small molecules such as N-hydroxy-N-phenol-octane-1,8-diotic acid diamide, calcium ionophores like BAPTA, metal ions such as Nickel and Cobalt, iron chelators and differentiating agents like retinoic acid induce NDRG1 expression. Additionally, NDRG1 is induced during cellular DNA damage and endoplasmic reticulum stress.
In the Schwann cells, NDRG1 is essential for myelin sheath maintenance. Hence, NDRG1 is a multifunctional protein with roles that may be tissue- and/or cell-type specific.
It has been found to be a Rab4a effector protein that recruits to the recycling endosomes in the Trans Golgi network by binding to the lipid phosphotidylinositol 4-phosphate (PI4P), where it plays a role in the recycling of E-cadherin. NDRG1 also interacts with HSP70. NDRG1 co-localizes with APO A-I and A-II, and may be involved in lipid transport.
Evidences obtained from global gene expression analysis of breast cell lines with high endogenous NDRG1 expression transduced with shRNA against NDRG1 suggested an involvement of NDRG1 with vesicle transport (Askautrud et al, 2014).
In cancer, NDRG1 is reported to be a metastasis suppressor gene which is downregulated in prostate, colon and breast cancers. However, up-regulation of NDRG1 has also been associated to poor prognosis in breast, renal, hepatocellular, and colorectal cancer, suggesting that it may play different role depending on cellular type and context (Nagai. et al, 2001; Nishie et al, 2001; Chua et al, 2007; Strzelczyk et al, 2009).
Signaling Pathways
The widespread localization of NDRG1 might impact its involvement with diverse signaling pathways. It has been demonstrated that NDRG1 interacts directly with NF-κB, PI3K/AKT/ mTOR, Ras/Raf/MEK/ERK, TGF-β; and Wnt/β-catenin pathways independently with each pathway or by promoting a crosstalk between them (Sun J et al, 2013). The nuclear translocation of the DNA binding subunit of NFκB, NFKB1 (p50), complexed with RelA is reduced by NDRG1 as a consequence of the induced degradation of IKBKB (IKKβ), subunit of the IκB kinase complex (Hosoi et al, 2009). The effect of NDRG1 on NFκB signaling pathway seems to be dependent of phosphorylation at residues Ser330 and Thr346 by SGK1 (Murakami et al, 2010).
The expression of PTEN, a tumor suppressor gene described as inactivated in diverse types of human cancers, is also involved in tumor metastasis suppression and it was demonstrated that PTEN targets NDRG1 in a PI3K dependent manner. It was demonstrated that up regulation of PTEN increase the level of NDRG1 and the inhibition of PTEN by shRNA also inhibits NDRG1 expression. This blockage is reverted when the cells are treated with phospho-Akt inhibitor, evidencing a dependency of PI3K/AKT pathway (Bandyopadhyay, et al, 2004). In prostate epithelial cells NDRG1 expression increased phosphorylation of tumorigenic AKT, ERK1/2 and SMAD2L and decreased PTEN levels (Dixon et al, 2013). NDRG1 also has been associated to up-regulation of SMAD4 that is responsible for nuclear translocation of effector SMADs upon TGFβ receptor activation. Up regulation of SMAD4 has a dual role both in TGFβ signaling, intermediating the induction of p21, and also blocking Ras signaling pathway by inhibiting ERK phosphorylation (Kovacevic et al, 2013) (Figure 2). 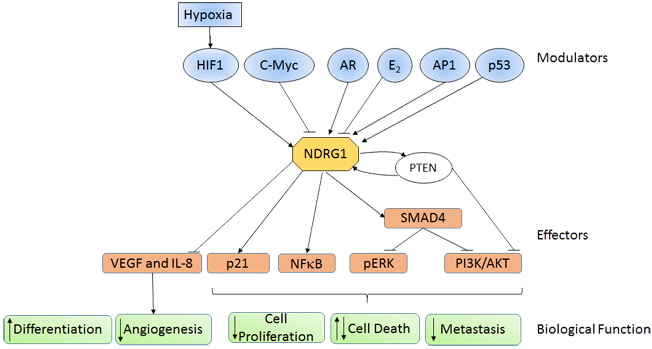 NDRG1 amino acid sequence is 53% homologous to NDRG2, 62% to NDRG3, 62% to NDRG4, and 94% homologous to the mouse analog, Ndr-1 (also known as TDD5). NDRG1 homologs have been found in Helianthus, Caenorhabditis, Xenopus and Drosophilia.