Review on NGFR, with data on DNA, on the protein encoded, and where the gene is implicated.

The transcript encodes 427 amino acids, including a signal peptide sequence.

Nerve growth factor receptor (NGFR) is a low affinity cell surface receptor for NGF. It is a member of the Tumor Necrosis Factor receptor (TNFR) superfamily, and thus anonymously called TNFRSF16. NGFR not only serves as a common receptor subunit for neurotrophins (NGF, BDNF, NT-3 and NT-4/5), but also binds their precursors (pro-neurotrophins), pro-NGF, pro-BDNF, pro-NT-3 and pro-NT-4/5. It also works as a co-receptor with other receptor partners, such as SORT1 (Sortilin), LINGO1 and RTN4R (Nogo receptor/NOGO-R)(Wang et al. et al., 2002; Bronfman et al. et al., 2004; Mi et al. et al., 2004; Meabon et al. et al., 2015).
NGFR consists of 427-amino-acid in overall length, and possesses an extracellular region with four 40 amino acid repeats with 6 cysteins at conserved positions followed by a serine/threonine-rich region, a single transmembrane domain, and a 155 amino acid cytoplasmic domain. The extracellular receives N- and O- glycosylations, and the cysteine-rich region conserved among the TNFR superfamily is licensing it as a similar receptor. The intracellular region lacks any catalytic domain, instead it possesses a death domain implicated in protein-protein interaction. Therefore, its signaling potential is dependent on protein-protein interactions.
NGFR receives proteolytic processing. Extracellular cleavage is mediated by ADAM17/TACE, which modifies NGFR to a smaller 28-kDa membrane-bound C-terminal fragment (p75-CTF). Further processing of p75-CTF by γ-secretase releases the intracellular domain (p75-ICD), which is implicated in cell death (Underwood et al. et al., 2008). Recent report indicates that the most abundant homotypic arrangement for NGFR is a trimer, and both of the monomers and trimers coexist (Anastasia et al. et al., 2015). In neurons, the trimers are not required for NGFR activation irrespective of ligand stimulation, whereas monomers are capable of conferring acute responses. Activation of NGFR is context-dependent, where the oligomerization status and expression amount determine the biological effect, and the trimers seem to sequester NGFR from an active form. 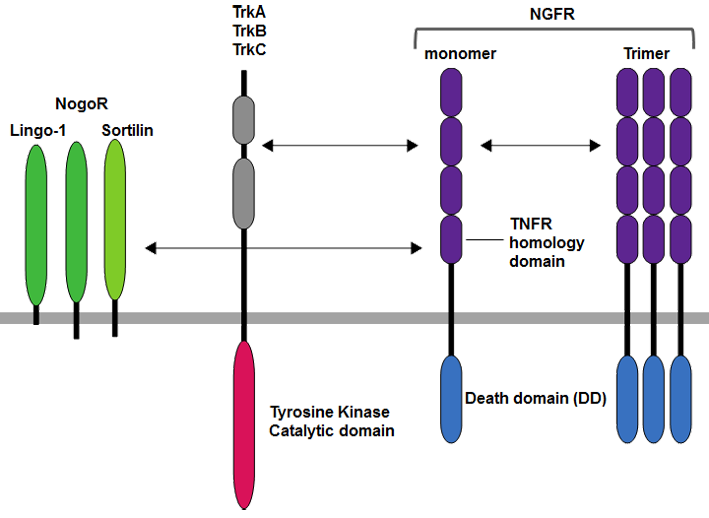 NGFR is localized on cellular membrane, either as a monomer or a trimer. NGFR forms a receptor heterodomer complex with TrkA, TrkB and TrkC. Also, NGFR associates with cell surface receptors such as Lingo-1, NogoR and Sortilin.