Figure 1. Schematic structure of SIVA1 and SIVA2 proteins. The amphipathic helical region (SAH) at the N-terminal region, a death domain homology region (DDHR) in the central section, and a Zinc finger-like (ZF) structure at its C-terminal region are illustrated. The amino acids (aa) positions are indicated.

SIVA1 is found in the nucleus and cytoplasm (Figure 2). 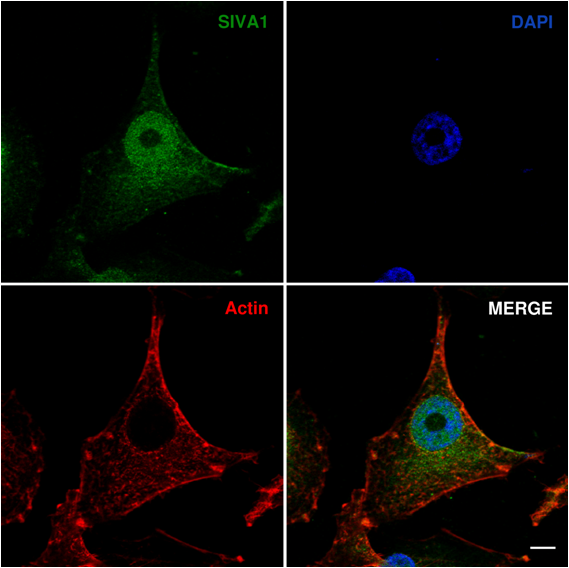 The proapoptotic function of SIVA1 is well elucidated and characterized. SIVA1 binds to death receptors, including CD27 and TNFRSF18, and plays a role in the transduction of the proapoptotic signal by the extrinsic pathway (Prasad et al., 1997; Spinicelli et al., 2002). SIVA1 interacts with BCL2 and BCL-XL, abrogates their antiapoptotic functions and modulates the intrinsic apoptosis pathway (Chu et al., 2004; Chu et al., 2005). In addition, SIVA1 associates with XIAP and regulates the apoptosis mediated by NFkB and JNK signaling (Resch et al., 2009). The SIVA gene is a transcription target of p53, p73 and E2F1 and is upregulated under stress or following DNA damage (Ray et al., 2011; Fortin et al., 2004).
Recently, novel partners and functions have been attributed to SIVA1. SIVA1 binds to and regulates p53 stability by acting as an adapter protein between p53 and MDM2, and participates in an auto-regulatory feedback loop between p53 and SIVA1 (Du et al., 2009; Mei and Wu, 2012). SIVA1 associates with ARF, enabling its ubiquitination and degradation; this mechanisms also regulates the p53/MDM2 signaling pathway (Wang et al., 2013).
Finally, SIVA1 is a novel adaptor protein that promotes Stathmin 1/CaMKII interaction. SIVA1 inhibits Stathmin 1 activity through Stathmin 1 phosphorylation at serine 16, which results in reduced cell migration and metastasis by stabilizing microtubules of tumor cells (Li et al., 2011). The main functions and signaling pathways of SIVA1 are illustrated in Figure 3. 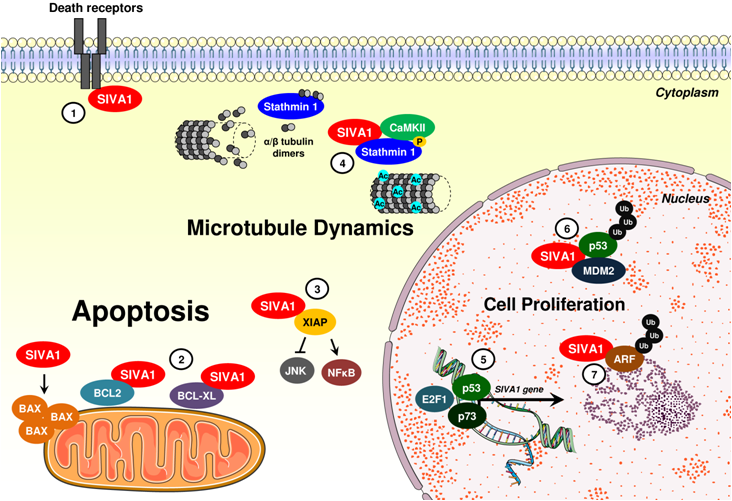 SIVA1 shares high homology (around 40%) in its DDHR domain with the FADD and RIP proteins. SIVA1 also shares a high homology with different species (Table 1). 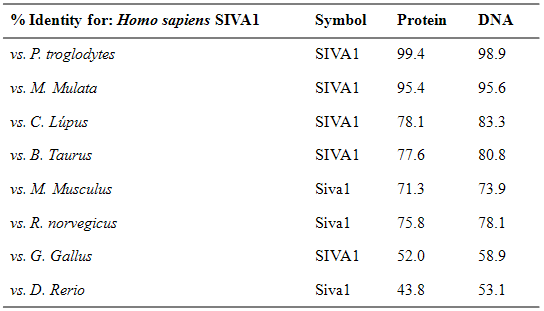 Mutations in the SIVA1 gene are rare, only six missense and one nonsense mutations are reported at COSMIC (Catalogue of somatic mutations in cancer).