TMPRSS2 is a 492 amino acid type II transmembrane serine proteases (TTSPs) which are expressed at the cell surface and are thus ideally located to regulate cell-cell and cell-matrix interactions.

TMPRSS2 is expressed in normal and diseased human tissues. Especially, TMPRSS2 is highly expressed in small intestine, but also in lower levels in several other tissues. Also expressed in prostate, colon, stomach and salivary gland.

This gene was demonstrated to be up-regulated by androgenic hormones in prostate cancer cells and down-regulated in androgen-independent prostate cancer tissue. To containing intra- and extracellular domains, TMPRSS2 could work as a receptor for specific ligand(s) mediating signals between the environment and the cell. TMPRSS2 has been proposed to regulate epithelial sodium currents in the lung through proteolytic cleavage of the epithelial sodium channel and inflammatory responses in the prostate via the proteolytic activation of PAR-2.

TTPs (type II transmembrane serine proteases) contain an integral transmembrane domain and remain cell-surface-associated, even after proteolytic activation of the protease zymogen. Human TTSPs, which consists of 17 members, were grouped into four subfamilies based on similarity in domain structure and phylogenetic analysis of the serine protease domains, namely the matriptase, corin, hepsin/TMPRSS and HAT/DESC subfamilies. 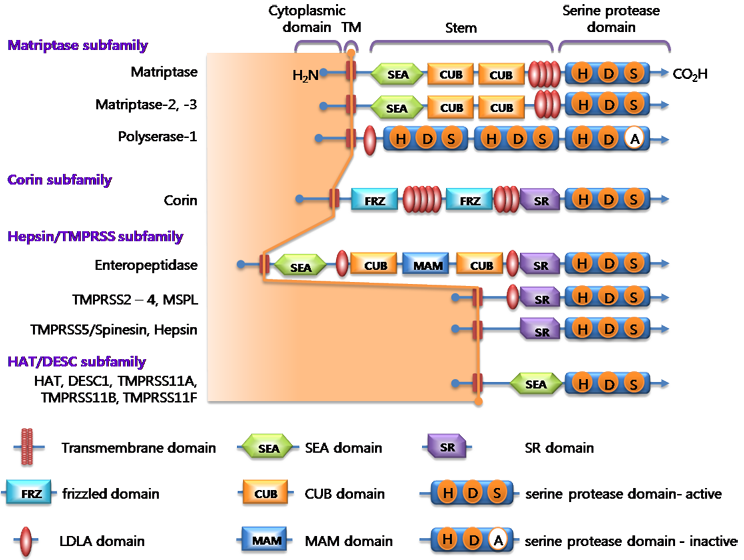 Entity name
Prostate cancer
Prognosis
TMPRSS2 was originally reported to be a small intestine-associated serine protease. Later, however, its gene turned out to be expressed mainly in the prostate in an androgen dependent manner.
In the prostate adenocarcinoma, TMPRSS2-EGR fusion mRNAs is highly expressed. Because of its location on the surface of prostatic cells, TMPRSS2 is a potential new diagnostic marker for prostate cancer. 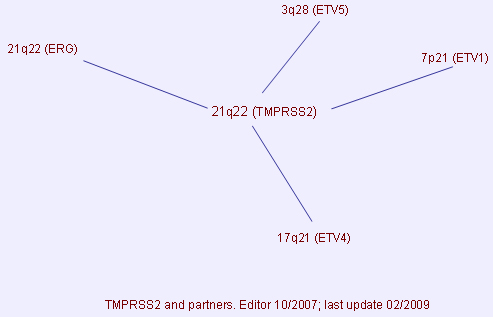