WASP is located in the cytoplasmic compartment with highest density along the cell membrane. 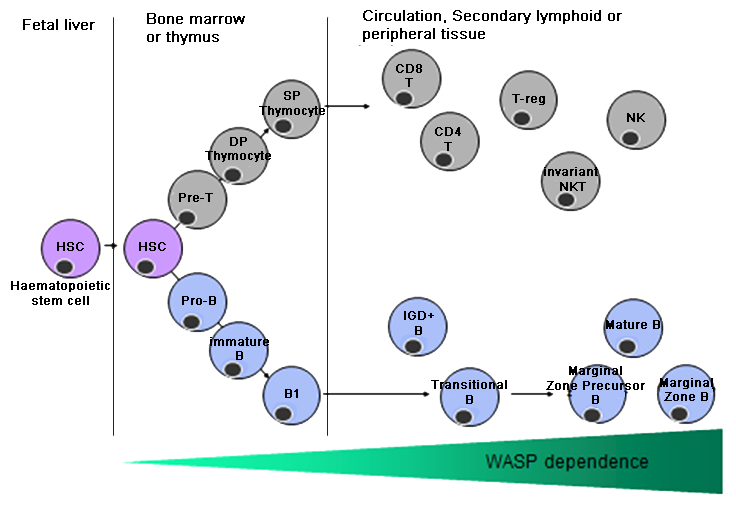 Figure 1: WASP and lymphocyte homeostasis. Dependence on WASP for homeostatic regulation varies with cell lineage and stage of maturity. Early stages of B cell development proceed normally in the bone marrow but homeostatic defects of peripheral subpopulations are apparent. The same is true for peripheral T-cells; and in humans with revertant WASP expression confers a survival advantage to these populations. Picture courtesy of Dr Siobhan Burns.

WASP family members function as scaffold proteins, transducing a wide range of signals from proteins or membranes to mediate dynamic changes in the actin cytoskeleton. A lack of WASP results in cytoskeletal defects that compromise multiple aspects of normal cellular activity including proliferation, phagocytosis, immune synapse formation, adhesion and directed migration.
WASP function in Haematopoietic system
WASP is expressed by all leukocytes, but dependence on WASP for homeostatic regulation varies with cell lineage and stage of maturity. WASP is required for the development and survival of mature lymphoid cell lineages but myeloid cell lineages that express normal WASP levels show little or no selective advantage.
WASP function in T cells
T cell development appears normal in WAS patients but the circulating lymphocyte number is reduced and progressively declines throughout childhood. There is decreased thymic output and lowered peripheral T cell survival rates. T cell proliferation in response to TCR stimulation is defective in vitro, and the clonal distribution of TCR β -chain families is usually disturbed.
The morphology of WASP-deficient T cells is disturbed with fewer microvillus-like surface projections. They are less able to proliferate in response to various stimuli because WASP is normally recruited to the immunological synapse. In the absence of WASP, the localised assembly of filamentous actin and recruitment of other immunological synapse proteins is impaired in response to TCR stimulation.
WASP function in B cells
WASP-deficient B cells have defective polarisation, spreading, aggregation and migration in response to CXCL13. Marginal Zone B cells are reduced and they fail to migrate in response to sphingosine-1-phosphate, which is crucial for marginal zone homing. This is consistent with a defect in response to polysaccharide antigens. The abnormal regulation of the actin cytoskeleton in B cells may be important for development of autoimmunity.
WASP function in NK cells
In the absence of WASP, NK cell cytotoxicity is impaired as immune synapse formation relies upon actin polymerisation. There is also defective signal transduction and poor intercellular interactions, particularly with dendritic cells.
WASP function in Invariant NKT cells
Invariant NKT (iNKT) cells express both NK- and T-cell receptors; and recognise lipid antigens via the non-classical class I MHC molecule CD1d. They are thought to be important in initial response to infection, protection from autoimmunity and clearance of malignant cells. WAS patients have reduced numbers of iNKT cells which also secrete less cytokine when stimulated.
WASP function in innate immune cells
WASP-deficient myeloid lineage cells have impaired phagocytosis, a process which relies upon quick and regulated de novo actin polymerisation. In addition, monocytes, macrophages, DCs and osteoclasts lack ability to assemble podosomes in the absence of WASP, resulting in severe defects in adhesion and motility. Efficient cell migration also requires interactions involving integrins. In WASP-deficient human and mouse neutrophils, β2 integrin clustering is defective resulting in impaired integrin-dependent functions that range from adhesion and migration to degranulation and activation of the respiratory burst.
Autoimmunity
Abnormal Treg have been implicated in the onset of autoimmunity in WAS. WASP-deficient Treg cells fail to proliferate normally in response to TCR simulation and their suppressive activity is impaired in vitro. Dysregulation of B cell tolerance is supported by the presence of autoantibodies in WAS patients and in both WASP null and phosphorylation mutant mice. 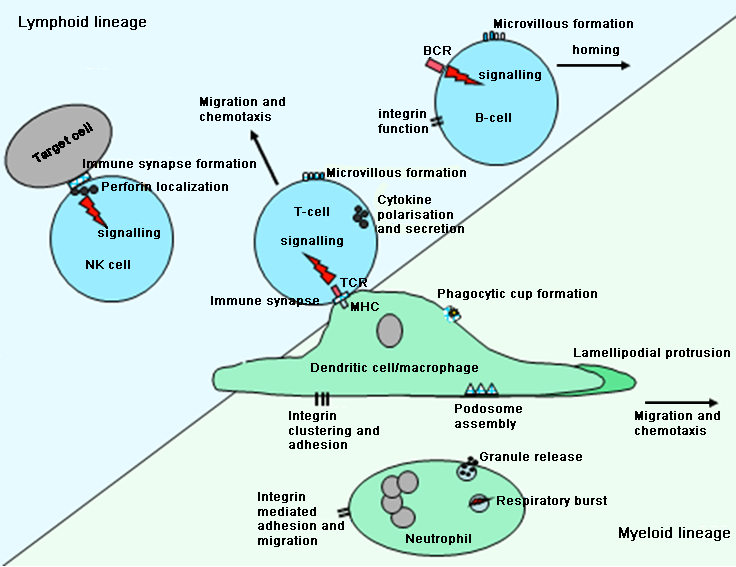 More than 295 unique mutations have been identified.
158 unique WASP gene mutations had been identified in a cohort of 270 unrelated WAS/XLT families. The most common are missense mutations, followed by splice-site mutations, short deletions, and nonsense mutations. Insertions, complex mutations, and large deletions are less frequent. Most deletions and insertions involve fewer than 10 nucleotides and result in frame shifting and early termination of transcription.
Amino acid substitutions are typically located in exons 1-4. Splice-site mutations occur predominantly in the downstream half of the WASP gene (introns 6-12).
Mutations affecting invariant splice sites may result in multiple splicing products, which often include small amounts of normal WASP cDNA.
Six mutational hotspots, defined as occurring in > 2,5% of the population, have been identified. Three of these hotspots represent point mutations within the coding regions, whereas the other 3 involve splice sites.

Patients who have missense or splice-site mutations may have residual protein expression and have a less severe clinical phenotype.

Note
Mutations of the WASP gene result in 3 distinct phenotypes: Wiskott-Aldrich Syndrome (WAS), X-linked thrombocytopaenia (XLT), and congenital X-linked neutropaenia (XLN).
Entity name
Wiskott- Aldrich syndrome (WAS)
Note
WAS is characterised by low numbers of small platelets, easy bruising and prolonged bleeding, eczema and recurrent infections. It can be complicated by autoimmunity and haematopoietic cell malignancies.
Prognosis
Classical WAS has a poor prognosis, but early treatment with haematopoietic stem cell transplant is curative in most patients. Reported median survival in patient with WAS is age 20 years. Death results from infections, bleeding complications, autoimmune diseases, and malignancies. WAS-associated malignancies have a poor prognosis.
Cytogenetics
Mutations of the WASP gene that result in absent or truncated protein are more likely to give rise to the classic WAS phenotype. Three of the six hotspot mutations identified (665C>T, IVS8+1 g>n and IVS8+1 to +6 del gtga) have been found to be predominantly WASP-negative and have a high clinical score characteristic for WAS.
Oncogenesis
Malignancies are more frequent in adolescents and young adults with the classic WAS phenotype. Most frequent malignancies reported are B cell lymphoma (often Epstein-Barr virus-positive) and leukaemia. Some younger patients may also present with marrow dysplasia.
Entity name
X-linked thrombocytopaenia (XLT)
Note
A milder clinical variant with fewer problems with eczema and minimal immunological disturbances. Incidence of autoimmune disease is less in XLT but has been reported to occur.
Prognosis
XLT patients generally have a benign disease course and excellent long-term survival, but they still carry an increased risk for severe disease-related events such as life-threatening infection (especially post splenectomy), severe bleeding, or autoimmunity and cancer.
Cytogenetics
The XLT phenotype is generally those with missense or splice-site mutations that allow expression of normal-sized mutated protein, often in reduced quantity. Three of the six hotspot mutations (168C>T; 290 C>N/291 G>N and IVS6+5g>a) have been found consistently in WASP-positive patients.
Oncogenesis
The incidence of malignancies in patients of the XLT phenotype is increased, but is lower than that in classic WAS.
Entity name
X-linked neutropaenia (XLN)
Note
A clinically and biologically distinct WASP-associated disorder, results from presence of a cluster of mutations that confer constitutive WASP activation. These mutations have been found to lead to genetic instability through dysregulation of actin polymerisation. Main clinical symptom is neutropaenia which causes a predisposition to bacterial infection, as well as myelodysplasia and other cytopaenias.
Cytogenetics
Only four mutations (Leu270Pro, Ser270Pro, Ile276Ser and Ile294Thr) have been reported so far.