The gene spans a region of 7857 bases and the coding part is divided into three exons.

The 492-nucleotide transcript encodes a protein of 163 amino acid residues. The first and last exons are partially untranslated.

None described so far.

Crystal structure of IL-17F at 2.85 A resomution. Adapted from PDB (access number: 1JPY). 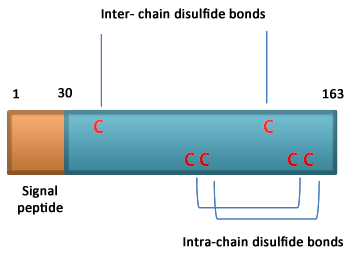 IL-17F is a secreted protein.

IL-17F exerts its biological effects through the IL-17RA/RC signaling complex. While the expression of IL-17RA is universal, IL-17RC expression is largely restricted to epithelial cells, fibroblasts and other stromal cells. IL-17RA/RC complex recruits an adaptor molecule, Act1, for signaling (Chang et al., 2006; Qian et al., 2007). Upon binding IL-17F, IL-17RA/RC can activate NF-kB and MAPK pathways. IL-17F shares the receptor complex with IL-17A homodimer and IL-17A/F heterodimer. They do not compete for the binding to the receptor complex since these cytokines together in the culture resulted in additive effects on production of pro-inflammatory molecules. Binding affinity of IL-17F to IL-17RA is weaker compared to IL-17F binding to IL-17RC (Kuestner et al., 2007). A crystal structure revealed that IL-17RA bound to IL-17F in a 1:2 stoichiometry and IL-17RA - IL-17F complex prefers to form heterodimers with a second receptor, IL-17RC, possibly due to steric hindrance (Ely et al., 2009).

IL-17A is the most homologues protein.

Familial chronic mucocutaneous candidiasis-6 (CANDF6) is caused by heterozygous ser65-to-leu mutation in the IL17F gene (Puel et al., 2011).
Chronic mucocutaneous candidiasis (CMC) is characterized by infections of the skin, nails, and oral and genital mucosae with Candida albicans, which is commensal in healthy individuals. S65L IL-17F behaves dominant-negative IL17F allele, which impairs the receptor binding and bioactivity of both IL-17F homodimers and IL-17A - IL-17F heterodimers.
A coding region variant (His161Arg) of IL-17F gene, possibly encoding an antagonist for IL-17F, has been linked to asthma patients in Japanese populations (Kawaguchi et al., 2006).