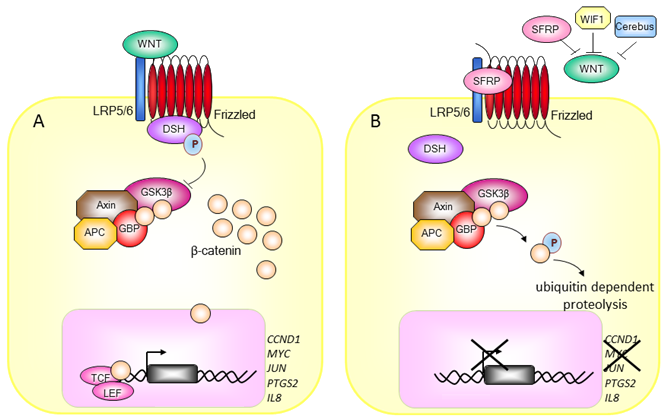 Wnt (wingless-type)/β-catenin signaling is a major regulator of cell proliferation, migration and differentiation, controlling tissue homeostasis and tumor progression (Klaus et al., 2008). A) The binding of a canonical Wnt ligand to its cell-surface receptor complex, consisting of Frizzled (FZD) and one of two low-density-lipoprotein- receptor-related proteins (LRP-5 and LRP-6), initiates a signaling cascade that activates disheveled (DVL), which releases β-catenin from an inhibitory complex consisting of Axin, APC and glycogen synthase kinase 3b (GSK3B). On dephosphorylation and release, β-catenin translocates to the nucleus, where it interacts with members of the T-cell factor/lymphoid enhancer factor (TCF/LEF) families of transcription factors to stimulate expression of genes involved in cell survival, proliferation and osteoblastic differentiation (e.g., MMPs, CCND1, PTGS2, MYC, JUN and VEGFR) (Reya et al., 2005). B) Wnt signaling is regulated by several classes of negative regulators. The Secreted Frizzled-Related Protein (SFRP) class comprises SFRP1-SFRP5, Wnt inhibitory factor 1 (WIF1) and Cerberus. SFRPs are a family of soluble glycoproteins that possess a cysteine- rich domain (CRD) structurally similar to the extracellular Wnt-binding domain of the FZD receptors. SFRPs can thus modulate Wnt signaling by sequestering Wnts through their CRD or by acting as dominant-negative inhibitors, forming inactive complexes with the FZD receptors.

Size: 8487 bases. The SFRP2 gene is located on the long arm of Chromosome 4, and consists of 3 coding exons, with exon 2 being significantly smaller than the other two. No known splice variants.

SFRP2 contains several domains which potentially govern protein-protein interactions.
- Beginning at the N-terminus there is a 24 aa hydrophobic signal domain, which presumably governs the targeting of SFRP2 to the secretory pathway.
- The CRD/FZ (cysteine-rich/Frizzled) domain allows SFRP proteins to antagonise Wnt/Frizzled binding at the plasma membrane either by sequestration of the Wnt ligand or dominant-negative binding to complimentary regions within the Frizzled protein.
- The C345C/Netrin domain is an accessory binding domain for SFRP2-Wnt interaction.
- The PDZ ligand domain is a short sequence which is recognised by PDZ proteins such as Dishevelled (Dvl), and other proteins which interact with the cytoplasmic portion of Frizzled (Schulte and Bryja, 2007). Notably, a recent study (Zhang et al., 2009) has used synthetic PDZ ligands to interfere with Dvl/FZD cytoplasmic interaction, and thus antagonise canonical Wnt signalling. Additionally, another group subsequently showed that the NSAID Sulindac inhibits canonical Wnt signaling by blocking the PDZ domain of Dvl (Lee et al., 2009). These data suggest that the presence of a PDZ ligand in SFRP2 may indicate a previously-unexplored role for SFRP2 as a cytoplasmic antagonist of Wnt signalling.
- A phosphoproteomic study has revealed phosphorylation of SFRP2 at serine-289 in response to growth factor stimulation (Olsen et al., 2006). Bioinformatic analysis suggests that this site is a motif for recognition and phosphorylation by PKA. Additionally, bioinformatic analysis of the SFRP2 sequence suggests a site for phosphorylation by GSK3β (itself an inhibitor of β-catenin) at either serine-34 or serine-38. Although the potential significance of phosphorylation at this site is unclear, it may overlap with the Nec 1/Nec 2 cleavage site and prevent removal of the N-terminal signal domain. Typically, Nec 1/2 is responsible for the cleavage of pro-proteins into their active form, and perhaps phosphorylation in this region is a mechanism by which GSK3β may regulate SFRP2 activity.

SFRP2 is a member of the secreted Frizzled-related protein (SFRP) family of soluble extracellular Wnt antagonists, which act in conjunction with the Dickkopf (DKK) class of Wnt antagonists. SFRP2 is thought to act primarily by binding directly to and sequestering Wnt ligands, but may also act by direct binding to the Wnt-receptor complex. Binding occurs primarily via the cysteine-rich domain, which bears a high degree of homology to similar domains in the Frizzled (Fzd) receptor. SFRP activity may conversely promote Wnt pathway signalling in some contexts, as a consequence of SFRP proteins interacting with each other and titrating each others activity, or by SFRP binding and stabilising Wnt-Fzd complexes.

SFRP2 has a high degree of homology to both other SFRP family members, as well as Fzd receptors via the cysteine-rich domain.