The ELF4 gene is located on the X-chromosome (Xq26) and is transcribed from telomere to centromere. The ELF4 gene contains 8 coding exons and 1 non-coding exon. 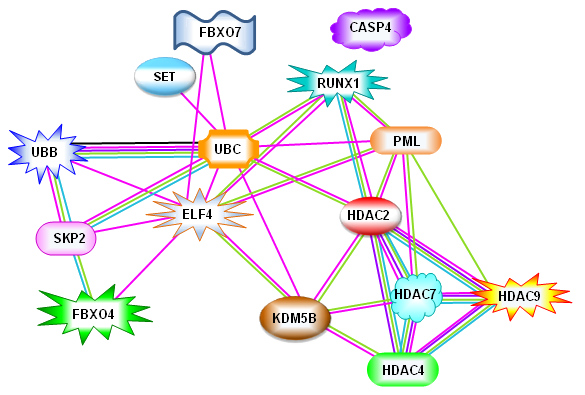 ELF4 interacts with multiple proteins and plays important role in development and oncogenesis.

The transcription factor ELF4 belongs to the ETS family of transcription factors, named after the E26 (E twenty six) leukemogenic chicken virus which contains a gag-myb-ets fusion. These proteins are characterized by the presence of the ETS domain (a conserved 84 amino acid domain) that binds to a DNA consensus sequence containing a GGAA central core via a winged helix-turn-helix motif. Based on the homology of the ETS domain, these proteins have been classified in different subfamilies (e.g., Elf, Spi, and Yan). The ETS domain is highly conserved among family members with the greatest homology of ELF4 with other proteins in the Elf subfamily, which also includes ELF1, NERF1a, and NERF1b. ELF4 does not contain an HLH or pointed protein-protein interaction domain, which is present in members of the ETS, ERG, GABP, and Yan subfamilies (Lacorazza and Nimer, 2003).

No known mutations. Fused in hepatocellular carcinoma with the BCORL1 gene.

Entity name
Acute myeloid leukemia
Disease
Acute myeloid leukemia (AML) is the most common acute leukemia in adults. It usually occurs around age 60 with no identifiable cause and it carries a very poor prognosis, with most patients living less than 18 months. AML is a devastating illness with over 13000 new diagnoses and 10000 patients dying annually in the United States. Although select molecular subpopulations of patients are long-term survivors, the overall five-year survival for adults is only 25%. ETS proteins (such as PU.1, Fli-1 and ETS-1) have been shown to play important roles in normal and abnormal hematopoiesis (Lacorazza and Nimer, 2003). ELF1 and ELF4 were expressed in all AML samples, whereas NERF was not. The relative expression of ELF4, but not ELF1, was significantly lower (P
Prognosis
The low relative expression of ELF4, might be part of a gene expression profile characterizing AML with a good prognosis (Fukushima et al., 2003; Ando et al., 2013).
Cytogenetics
A chromosomal translocation has been reported in AML, t(X;21)(q25-26;q22), that generates a fusion transcript between two ETS family members, ELF4 (at Xq26) and ERG (at 21q22). The translocation occurs within intron 1 of ERG isoform 1 (ERG-1) and intron 2 of ELF4 resulting in an in-frame fusion joining exon 2 from ELF4 with exon 2 of ERG (Moore et al., 2006).
Hybrid gene
ELF4-ERG. The fusion sequence includes exon 2 of ELF4 and exon 2 of ERG1, with the breakpoint occurring after exon 2 in ELF4 (intron 2) and before exon 2 of ERG1 (intron 1) (Moore et al., 2006).
Fusion protein
ELF4-ERG (495 amino acids).

Horizontal lines represent amino acid residues for ELF4 and ERG-1. Numbers above each line indicate the number of amino acids at the corresponding position. Boxes below indicate locations of the conserved domains within both protein sequences. The predicted fusion protein would include the first 25 amino acid residues from ELF4 encoded by exon 2 and the last 470 amino acid residues encoded by ERG exons 2-10 resulting in a protein of 495 amino acids. The conserved SAM-PNT and ETS domains from ERG would be included in the fusion while the ETS domain from ELF4 would be excluded.
Oncogenesis
ERG has been associated with other fusion partners, specifically FUS and EWSR1, and implicated in both AML and Ewings sarcoma. The ELF4-ERG fusion suggests a new role for ELF4 in leukemogenesis and human cancer (Moore et al., 2006), as it provides a strong promoter to express ERG. In addition, wild-type nucleophosmin (NPM1) inhibits the DNA binding and transcriptional activity of ELF4 on the HDM2 promoter, while a common, leukemia-associated NPM1 mutant protein (Mt-NPM1) enhances these activities of ELF4 (Ando et al., 2013). Moreover, clinical leukemia samples with NPM1 mutations have higher human MDM2 (HDM2) mRNA expression. These data suggest that enhanced HDM2 expression induced by mutant NPM1 may have a role in ELF4-dependent leukemogenesis (Ando et al., 2013).
Entity name
Ovarian cancer
Disease
Ovarian cancer is the seventh most common cancer in women worldwide and the second leading cause of death among the gynecological malignancies. ELF4 is expressed in a significant proportion of ovarian carcinomas, and in the CAOV3 and SKOV3 ovarian cancer cell lines, but not in normal ovarian surface epithelium (Yao et al., 2007).
Prognosis
High levels of ELF4 expression in ovarian cancer are associated with a poor prognosis (Yao et al., 2007).
Oncogenesis
Manipulating MEF levels in ovarian cancer cell lines alters their behavior; reducing ELF4 levels, using short hairpin RNA expressing vectors, significantly inhibited the proliferation of SKOV3 and CAOV3 cells in culture, and impaired the anchorage-independent growth of CAOV3 cells. Overexpression of ELF4 in SKOV3 cells significantly increased their growth rate, enhanced colony formation in soft agar and promoted tumor formation in nude mice. The oncogenic activity of MEF was further shown by the ability of ELF4 to transform NIH3T3 cells, and induce their tumor formation in nude mice (Yao et al., 2007). Thus, ELF4 is an important regulator of the tumorigenic properties of ovarian cancer cells and could be used a therapeutic target in ovarian cancer (Yao et al., 2007).
Entity name
Gliomas
Disease
Malignant gliomas represent the most prevalent primary brain tumor in adults and inevitably have a poor prognosis. Despite the implementation of new therapeutic strategies, the median survival of patients with glioblastoma multiforme (GBM), the most aggressive glioma variant, is only 14-16 months and these tumors remain rapidly and uniformly fatal. High-grade gliomas are composed of a heterogeneous population of cells that include many with stem-cell-like properties. The acquisition of stem-like traits might contribute to glioma initiation, growth, and recurrence. ELF4 is highly expressed in both human and mouse glioblastomas and its absence impairs gliomagenesis in a PDGF-driven glioma mouse model (Bazzoli et al., 2012).
Prognosis
High levels of ELF4 expression in gliomas are associated with a poor prognosis (Bazzoli et al., 2012).
Oncogenesis
Modulation of ELF4 levels in both mouse neural stem cells and human glioblastoma cells has a significant impact on neurosphere formation. Thus, ELF4 is a gatekeeper gene that promotes stemness in the pathogenesis of gliomas (Bazzoli et al., 2012).