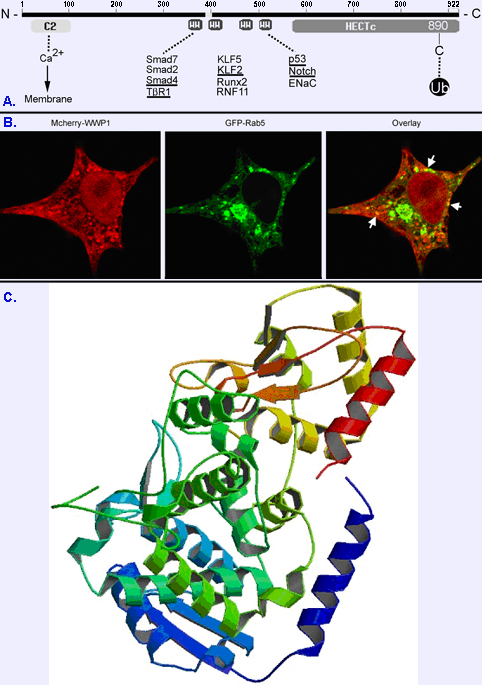 A: WWP1 protein
B: Exogenous WWP1 expression in the 22Rv1 prostate cancer cell line was detected under a confocal microscopy. The endosomes are indicated by GFP-Rab5.
C: Protein structure of WWP1

922 amino acids; approximatively 110 kDa protein; The C2 domain at N-terminus is responsible for calcium-dependent phospholipid binding. The four WW domains in the middle are responsible for protein-protein interaction with PY motifs. The HECT domain at the C-terminus is responsible for the ubiquitin transfer. The Cystein 890 is the catalytic center. The underlined WWP1 substrates do not have a PY motif (PPXY). A smaller WWP1 protein isoform was detected in two prostate cancer cell lines PC-3 and LAPC-4 (Chen C, 2007).
Protein structure: The HECT domain of WWP1 (see Figure 2C.)(Verdecia MA., 2003).

Predominately on membrane structures in cytoplasm and occasionally in nucleus (see Figure 2B.).

WWP1 belongs to the C2-WW-HECT E3 family which contains 8 other members (Chen C, 2007). The WWP1 gene is highly-conserved among species (from human to c. elegant).

The WWP1 gene is rarely mutated in human prostate cancer (Chen C, 2007). Two sequence alterations were detected in prostate cancer xenografts. One was 2393A-->T (Glu798Val) in CWR91 and the other was 721A-->T (Thr241Ser) in LuCaP35. Additionally, some mutations in the HECT domain decrease the E3 ligase activity (Verdecia MA., 2003).