The gene for NTRK3 is located on chromosome 15 q25 and is encoded by 20 exons. Exon 1 codes for the translation initiation codon (ATG) and the signal sequence (SS), while the stop codon is located in exon 18. Exons 1 to 4 encode the Neurotrophin ligand binding domain (also known a the Immunoglobulin - like domain 2). Exons 10 and 11 encode the transmembrane domain while the tyrosine kinase domain is encoded by exons 13-18.

Variant transcripts exist for NTRK3, which have been termed non-catalytic (NC) as they do not contain enough sequence to mount an appropriate autophosphorylation event. These have been named NTRK3-NC1 and NTRK3 NC2.

The NTRK3 protein is composed of several regions.

145 kDa protein, located on plasma membrane with an extra-cellular ligand binding domain, a transmembrane domain, and an intracellular tyrosine kinase domain. Ligand for NTRK3 is Neurotrophin 3; after binding to NTRK3, it causes dimerization and autophosphorylation of specific tyrosine phosphates, which in turn act as anchors and activators of downstream molecules such as Shc, PI3-K and PLC-g.

Primarily in central nervous system tissue with specific emphasis in hippocampus, cerebral cortex, and the granular cell layer of the cerebellum. In addition, there is a minor amount expressed in a variety of other tissues.

Acid sequence is 97% and 98% homologous to the rat and porcine TRKC sequences, respectively.

Entity name
Medulloblastoma
Note
Over-expression of NTRK3 mRNA was found to be associated with a much favorable prognosis over medulloblastomas with a comparatively low expression of NTRK3.
Entity name
Congenital Fibrosarcoma (CFS) and Congenital Mesoblastic Nephroma-cellular variant (cellular CMN).
Disease
CFS and cellular CMN are pediatric tumors of spindle cell origin (mesoblastic origin). CFS primarily presents at birth up to 2 years of age, usually affecting the extremities. Cellular CMN, on the other hand is a pediatric spindle cell tumor of the kidney.
Prognosis
The presence of the ETV6-NTRK3 gene fusion in both CFS and cellular CMN indicate an excellent prognosis when compared to their histologically similar and more aggressive counterparts.
Cytogenetics
The ETV6-NTRK3 gene fusion is the result of a t(12;15)(p13;q25).
Hybrid gene
ETV6-NTRK3 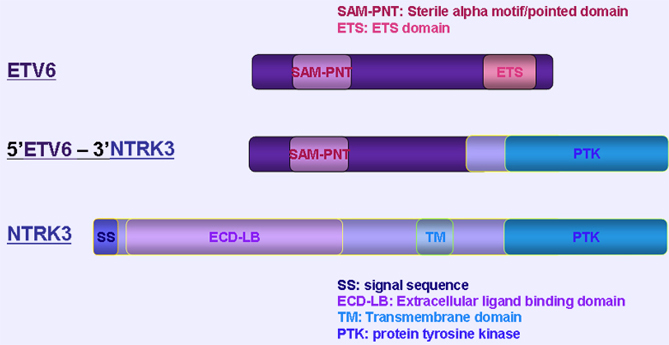 The amino terminus is composed of the first 5 exons from ETV6, which carries the Helix-Loop-Helix Domain (HLH) responsible for dimerization. The remainder of the protein is composed of the Protein Tyrosine Kinase domain from NTRK3. The arrow represents the point at which the ETV6 contribution ends and the NTRK3 contribution begins.
Oncogenesis
Current speculation regarding the oncogenic mechanism of the fusion protein is related to its putative activation of the MAP Kinase pathway with resultant activation of various downstream proteins such as transcription factors. Native NTRK3 requires extracellular ligand binding of Neurotrophin 3 prior to its dimerization and autophosphorylation. ETV-6-NTRK3, however, bypasses this requirement as it contains the HLH domain from ETV6 which allows the molecule to dimerize in the absence of Neurotrophin 3 and thus remain in a constitutively activated (phosphorylated) state. Once again, the presence of ETV6-NTRK3 seems to make these particular neoplasms behave more indolent than their aggressive Ductal Carinoma counterparts, which do not harbor the ETV6-NTRK3 gene fusion.
Entity name
Secretory Breast Carcinoma (a variant of ductal carcinoma of the breast)
Note
Virtually all cases of CFS and cellular CMN to date have been associated with the ETV6-NTRK3 gene fusion. In addition these malignancies almost always have an additional copy of chromosome 11. This additional copy of chromosome 11 is not found in secretory breast carcinoma. Finally, the ETV6-NTRK3 gene fusion was found in secretory breast carcinomas of all ages (the youngest case being a 6 year old female).
Disease
Secretory Breast Carcinoma is an epithelially derived breast cancer, as opposed to the mesoblastic CFS and cellular CMN above. It can occur in the pediatric population and much more commonly in adults.
Cytogenetics
The ETV6-NTRK3 gene fusion is the result of a t(12;15)(p13;q25).
Hybrid gene
ETV6-NTRK3
Please see above diagrams and explanations for the protein and proposed oncogenic mechanism. 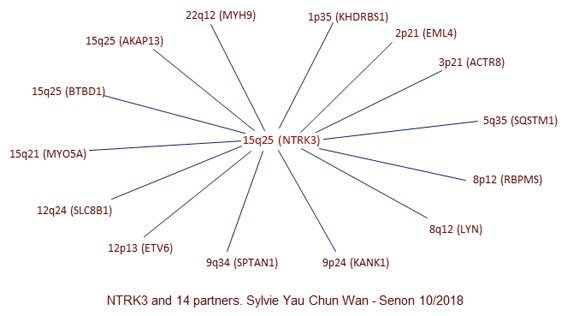