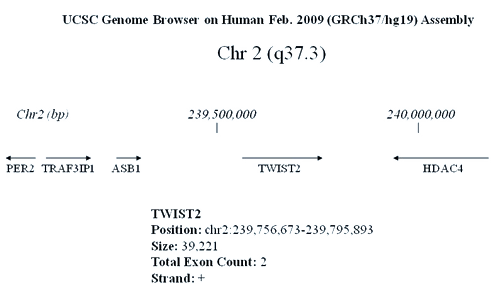 TWIST2 DNA sequence contains 2 exons separated by a large intron, with the entire coding region located in exon 1 (Šošic et al., 2003). Two transcript variants encoding the same protein have been described: variant 1 of 1434 bp and variant 2 of 1186 bp. Both variants encode a same protein but have different 3 UTR ( NCBI).

No pseudogene of TWIST2 is known.

Structure of TWIST2 protein. The protein domains and their length (indicated by number of limiting residues) are reported. TWIST2 contains 2 nuclear localization signals, a basic helix loop helix (bHLH) domain and a TWIST box domain (Modified from Gong and Li, 2002).

TWIST2 is involved in mesodermal patterning and in differentiation of multiple cell lineages including muscle, cartilage, osteogenic, adipogenic and myeloid cells (Lee et al., 2000; Gong and Li, 2002; Lee et al., 2003; Sharabi et al., 2008). In human embryonic tissues TWIST2 protein is detectable in early chondroblast cells in cartilage plate and surrounding mesenchymal cells, especially near the tip of the digits (Lee et al., 2000). In the skin, it is expressed early in the undifferentiated mesenchymal layer beneath the epidermis that will develop into dermis (Lee et al., 2000). TWIST2 is expressed in myeloid progenitors (Sharabi et al., 2008). In adult tissues, TWIST2 is expressed in the bone marrow (Ishikawa et al., 2013). A low level of expression has been reported in glands and tubules (Lee et al., 2000) as well as liver, muscle, pancreas, and adipose tissue (Pettersson et al., 2010). It should be pointed out that many antibodies used to detect the expression of TWIST proteins recognize both members of the family, making it hard to actually assess the specific contribution of each protein. 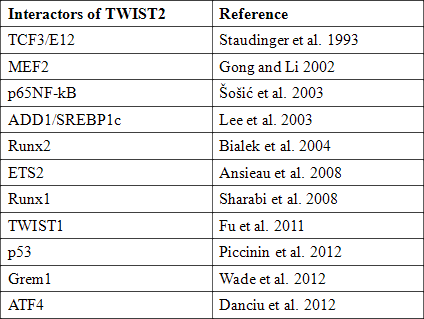 TWIST genes are evolutionary conserved from jellyfish to human. Duplications and deletions of TWIST genes occurred during vertebrate evolution (Germanguz et al., 2007; Gitelman, 2007).
The human TWIST2 protein shares 98.8% amino acid identity to mouse and rat and 95% to chicken Twist2 (Lee et al., 2000).
Within the bHLH protein family, TWIST2 displays the highest level of sequence similarity with TWIST1. The two proteins are near identical in the C-terminal Helix-Loop-Helix (HLH) and TWIST BOX domains, while they display some divergence in the N-terminal region (Lee et al., 2000; Gong and Li, 2002; Barnes and Firulli, 2009).

Missense mutations have been found in endometrial cancer COSMIC