The coding sequence for microRNA-122 (miR-122) comprises a single locus on the human chromosome 18 (Jopling, 2012). After transcription and processing, miR-122 is loaded onto an RNA-Induced Silencing Complex (RISC), comprised of Argonaute 2 (Ago-2), GW182, and other proteins (Wilson and Huys, 2013), where the miRNA duplex is unwound and one strand, the "guide strand" is retained and the other strand, the "passenger strand", is discarded. The miRNA guide strand directs the RISC to target mRNAs based on imperfect sequence complementarity. Important base-pairing occurs between nucleotides 2 - 8 of the miRNA (the seed sequence) and the 3 un-translated region (UTR) of the target mRNA (Du and Zamore, 2005). RISC binding directs the repressed mRNA to a processing (P)-body, where the mRNA is sequestered and/or degraded (Wilson and Huys, 2013). miR-122 antagonism shows that miR-122 regulates, directly or indirectly, at least 199 liver mRNAs (Elmén et al., 2008).

miRNA messenger RNAs are transcribed by RNA polymerase II, which generates a primary miRNA transcript (pri-miRNA) (Saj and Lai, 2011). Pri-miRNAs can encode a single miRNA, or multiple miRNAs expressed as a cluster (Arora et al., 2013). Unspliced pri-miR-122 is 7506 bp in length and only encodes miR-122; following splicing, the pri-miR-122 transcript is 4543 bp (Li et al., 2011). The spliced pri-miRNA contains a miR-122 stem-loop that is cleaved by a complex of Drosha, a nuclear RNase III enzyme, and DGCR8, a double-stranded RNA-binding protein to form the pre-miR-122 hairpin (Saj and Lai, 2011; Arora et al., 2013). The pre-miRNA is exported from the nucleus and cleaved once more in the cytoplasm by Dicer, an RNase III enzyme, resulting in the double-stranded miRNA duplex (figure 2) (Saj and Lai, 2011).
Studies have shown that expression of human miR-122 is highest in liver tissues, but is also detected in the nervous and respiratory systems (Landgraf et al., 2007). The same study showed that miR-122 is differentially expressed in cells of hematopoietic lineage (Landgraf et al., 2007). Regulation of miR-122 expression is not fully characterized, but involves liver enriched transcription factors (LETFs). LETF HNF4α binds to the miR-122 promoter region and positively regulates miR-122 expression in human hepatoma Huh-7 cells and in mouse liver (Li et al., 2011). Increased miR-122 results in activation of a number of transcriptional targets associated with , one of the key central regulators involved in miR-122 gene activation (Coulouarn et al., 2009). Other liver factors proposed to control miR-122 expression include HNF1A, HNF3A and HNF3B: a decrease in any of these factors results in reduced miR-122 expression; the same trend also occurs with HNF4G and HNF6 but to a lesser extent (Coulouarn et al., 2009). HNF6 is also part of a positive feedback loop that includes miR-122 and stimulates expression of various hepatocyte-specific genes and other LETFs required for hepatocyte differentiation (Laudadio et al., 2012). In addition, peroxisome proliferator activated receptor-gamma (PPARγ) and retinoid X receptor alpha (RXRα), can transcriptionally activate miR-122 (Song et al., 2013), but interestingly PPARγ inhibits miR-122 expression when bound by the hepatitis B virus X protein (Song et al., 2013). The variety of transcription factors that have direct or indirect roles on miR-122 expression allude to its multitude of functions.

There is no protein associated with MIR 122. 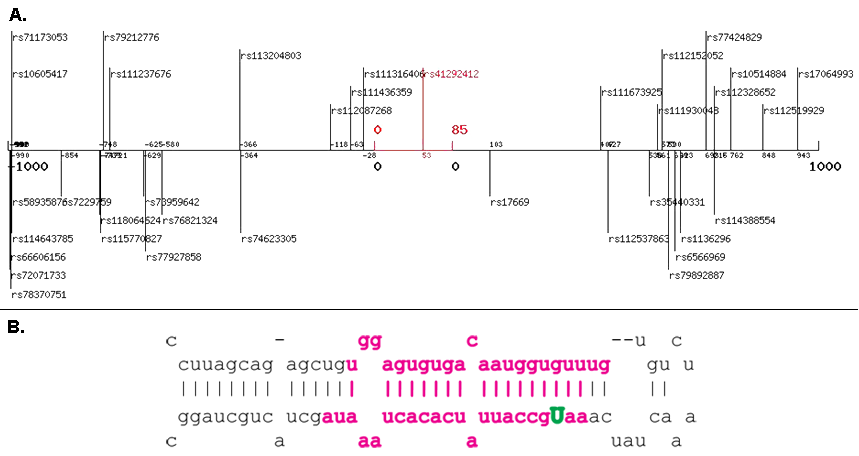