Some Gene Database only showed 11 coding exons and the first exon is not contained.

Figure a: Schematic diagram of the FOXP3 gene and protein. ZF: zinc finger domain, LZ: leucine zipper domain, and FKH fork-head domain.
Figure b: Alternatively spliced transcript variants encoding different isoforms have been identified. The two isoforms 1 and 2 is shown in the deletion of exon 3 and exon 3 with 5 part of exon 4, respectively. Other splice variant lacking both exons 3 and 8 was also reported (Smith et al., 2006).

1869 bps mRNA; transcribed in a centromeric to telomeric orientation. Alternative splicing: we have identified two isoforms in both normal breast and prostate cell lines and tissues, but thirteen isoforms were found in breast, prostate, and pancreas cell lines.

The FOXP3 protein is 431-amino acid long and its molecular weight is 47.25 kilo Daltons. It contains four potential functional domains including the repressor, ZF, LZ and fork-head (FKH) domains. The repressor domain is localized to the N-terminal region of FOXP3 and is required to repress NFAT-mediated transcriptional activity (Bettelli et al., 2005; Lopes et al., 2006; Wu et al., 2006). The mutant LZ domain impairs both dimerization and suppressive function of FoxP3 in T cells (Chae et al., 2006). The FKH domain is critical for both DNA binding and nuclear localization (Ziegler 2006). The FKH domain is the most frequent target in immunodysregulation polyendocrinopathy enteropathy X-linked syndrome (IPEX) patients.

Foxp3 is a member of the forkhead/winged-helix family of transcriptional regulators and functions as the master regulator in the development and function of regulatory T (Treg) cells (Fontenot et al., 2003; Hori et al., 2003; Khattri et al., 2003). Nevertheless, there is still a controversy as to whether defect Treg alone explains the lethal autoimmune diseases observed in the mutant mouse and man (Chang et al., 2005; Godfrey et al., 1991). Moreover, FOXP3 as the first X-linked tumor suppressor directly targets two critical oncogenes HER2/ErbB2 and SKP2 and represses their transcription activity to inhibit cell growth in breast cancer (Zuo et al., 2007a; Zuo et al., 2007b).

The somatic mutations but not germline mutations in breast cancer patients.

Somatic mutation of the FOXP3 gene in breast cancer samples: summary of sequencing data from 65 cases, including 50 formalin-fixed samples and 15 frozen samples. Genomic DNA was isolated from matched normal and cancerous tissues from the same patients and amplified with primers for individual exons and intron-exon boundary regions. Somatic mutations were identified by comparing sequences from normal and cancerous samples from the same patients. The data are from either bulk sequencing of PCR products or from the sequencing of 5-10 clones from PCR products. Only those mutations that were observed in multiple clones were scored. Mutations identified from 50 cases of formalin-fixed samples are marked in black, while those identified from 15 cases of frozen tissue samples are marked in red.

In mice, a Foxp3 frameshift mutation in the forkhead domain results in lethality in hemizygous males 16 to 25 days after birth (Brunkow et al., 2001). The mutation in some human IPEX patients is analogous as they cause frameshift and early termination of translation (Chatila, 2000; Brunkow, 2001; Bennett, 2001; Wildin, 2001).

In breast cancer patients, a total of 27 somatic mutations in all 11 coding exons and intron-exon boundary regions have been identified in 36% of 65 patients by PCR (Zuo et al., 2007b). In these mutations, there are 18 nonsynonymous mutations, 3 synonymous mutations and 6 mutations in the intron-exon junction 12 (Zuo et al. 2007b). Interestingly, the mutations are not randomly distributed in FOXP3 gene and the overwhelming majority of the mutations were either in the functional domains or within intron 11 which can affect the forkhead domain sequence (Zuo et al. 2007b).

Entity name
Breast cancer
Note
None
Disease
In majority of the mammary cancers, Foxp3 allele was inactivated and HER-2/ErbB2 and SKP2 are overexpressed and repressed the HER-2/ErbB2 and SKP2 promoters. Deletion, functionally significant somatic mutations, and down-regulation of the FOXP3 gene are commonly found in human breast cancer samples and correlated significantly with HER-2/ErbB2 over-expression, regardless of the status of HER-2 amplification. FOXP3 is an X-linked breast cancer suppressor gene and an important regulator of the HER-2/ErbB2 and SKP2 oncogenes in breast cancer development.
Prognosis
None
Cytogenetics
In fluorescence in situ hybridization (FISH) analysis, the FOXP3 gene is frequently deleted in the breast cancer samples. Out of 223 informative samples, we observed 28 cases (12.6%) with FXOP3 deletion. FOXP3 is likely within the minimal region of deletion in the Xp11 region studied. Although all deletions were heterozygous, the FOXP3 protein was undetectable in 26 out of 28 cases. Thus, it appears that for the majority of the breast cancer samples, LOH alone was sufficient to inactivate the locus, perhaps due to X-chromosomal inactivation. The two cases with both deletion and FOXP3 expression had X polysomy with three and four X chromosomes, respectively.
Hybrid gene
None

X-chromosomal deletion pattern in breast cancer. TMA samples were probed with 3 markers for X-chromosome as marked. The deletion of each probe was scored independently and summarized in the colour bars, each bar representing one case. Note that the FOXP3 locus encompasses the minimal deletion in the 10MB area of the X-chromosome. A typical FISH for the CEPX (green) and FOXP3 (orange) probes is shown.
Fusion protein
None
Oncogenesis
Mice with the Foxp3 heterozygous mutation spontaneously developed mammary cancer at a high rate (Zuo et al., 2007b). Foxp3 mutation have a comparably higher incidence of human mammary cancer and is likely responsible for the increased rate of breast cancer. Our analysis of human breast cancer samples provides strong support for an important role for the FOXP3 gene in the development of breast cancer (Zuo et al., 2007a; Zuo et al., 2007b). First, FOXP3 is likely the minimal region of deletion in breast cancer. Second, a high proportion of somatic mutations in the FOXP3 gene are identified in breast cancer and most of the mutations resulted in the non-conservative replacement of amino acids, and the deletions and mutations of the FOXP3 locus corresponded to increased HER-2 and SKP2 levels. Third, approximate 80% breast cancers have a down-regulation of FOXP3 in tumor tissues compared to normal breast tissues. These data indicated that FOXP3 is an X-Linked mammary tumor suppressor gene. 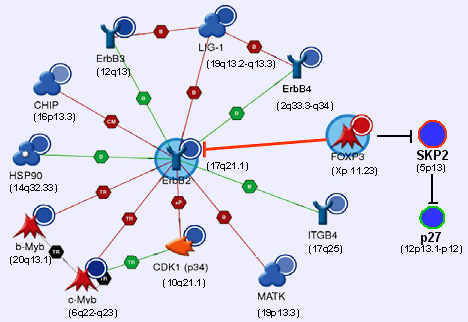 Ingenuity Pathway analysis indicated that FoxP3-regulated genes belong to multiple cellular pathways related to the process of cancer development. Most of which are not directly related to FOXP3-mediated repression of ErbB2 (Zuo et al., 2007b). Interestingly, when we used the GeneGo MetaCore knowledgebase to analyze genes that related to ErbB2 signaling pathway, we found that FOXP3 down-regulated 10 genes in this pathway. With the notable exception of b-Myb and c-Myb, the down-regulation is not likely related to FoxP3-mediated ErbB2 repression, as they are not known transcriptional targets of ErbB2. Thus, FOXP3 can suppress ErbB2 signaling and tumor growth by mechanisms other than ErbB2 expression. These data provide a plausible explanation for the tumor suppressor activity of FOXP3 in breast cancer cell lines that do not substantially overexpress HER-2. We also demonstrated that downregulation of SKP2 was critical for FOXP3-mediated growth inhibition in breast cancer cells that do not overexpress ERBB2/HER2 (Zuo et al., 2007a). Our data provide genetic, biochemical, and functional evidence that FOXP3 is a novel transcriptional repressor for the oncogenes HER2/ErbB2 and SKP2 (Zuo et al., 2007b; Zuo et al., 2007a).