A full-length mouse cDNA clone encoding KLF4 was initially isolated from a NIH3T3 cDNA library by reduced stringency screening with a DNA probe containing the zinc finger region of an immediate early gene product, Zif268 or Egr1. A distinct feature of the KLF4 gene is the highly GC-rich nature of the sequence near its 5-end. Thus, the G+C content of the 1000 nt 5-flanking region is 67% and that of the 5-untranslated region is 63%. Moreover, the bulk of the GC residues are concentrated in the region between nt -600 and +300 of the gene where the G+C content is 82%. The gene has four exons, each containing a portion of the translated region.

The open-reading frame of the Klf4 gene encodes a polypeptide of 483 amino acids with a predicted molecular weight of 53 kDa. The entire polypeptide sequence of Klf4 with the exception of the first amino acid is encoded by exons 2, 3 and 4.

KLF4 encodes a polypeptide of 483 aa and similar to KLFs, contains three Kruppel-type zinc fingers in the very C-terminal end. The region immediately N terminal to the three zinc fingers is a 20-aa peptide containing a cluster of basic aa residues, which is essential for the nuclear localization of the protein.

KLF4 is a nuclear protein whose cellular address depends on two nuclear localization signals. Expression of the KLF4 gene is developmentally regulated, with a higher level of expression occurring toward the later stage of fetal development. In adults, KLF4 is highly enriched in epithelial tissues, including the skin, lung, and intestine. In the intestinal tract, KLF4 is predominantly present in the terminally differentiated, postmitotic epithelial cells lining the villus border of the small intestine and the upper crypt region of the large intestine. In cultured cells, the level of KLF4 mRNA is associated with the growth-arrested state in a manner similar to that observed in the intestinal epithelium. Expression of KLF4 can also be found in a select number of other organs including the lung, testis, skin and thymus, and in vascular endothelial cells.

KLF4 is a nuclear protein that contains two potent nuclear localization signals (NLSs), one within the three zinc fingers and the other in a cluster of basic amino acids immediately adjacent to the first zinc finger. These two NLSs define a subfamily of three closely related KLFs: KLF1, KLF2, and KLF4.

KLF4 binds to DNA sequence elements that are GC-rich. A consensus DNA binding sequence was empirically determined and is present in the promoters of many genes, including the CACCC element and the basic transcription element (BTE). KLF4 inhibits the promoter of the cytochrome P-450IA1 ( CYP1A1 ) gene in a BTE-dependent manner.
In cultured cells, the level of KLF4 mRNA is associated with the growth-arrested state in a manner similar to that observed in the intestinal epithelium. Forced expression of KLF4 in cultured cells results in the inhibition of DNA synthesis. The induction of KLF4 is also correlated with an increase in the level of p21WAF1/CIP1, a critical checkpoint protein that inhibits cell cycle progression and is essential in mediating the cell cycle arrest at both the G1/S and G2/M boundaries. Importantly, KLF4 is essential in the induction of expression of the p21WAF1/CIP1 gene in response to DNA damage by binding to a specific cis-DNA element in the p21WAF1/CIP1 proximal promoter to activate p21WAF1/CIP1 expression. cDNA microarray analysis of the transcriptional profiles of KLF4 demonstrates that KLF4 inhibits the cell cycle by coordinately regulating expression of numerous cell cycle regulatory genes.
KLF4 mediates the cell cycle checkpoint function of the tumor suppressor p53 suggesting that it may itself act as a tumor suppressor. Its mRNA are reduced in intestinal adenomas of ApcMin/+ mice and colonic adenomas of patients with familial adenomatous polyposis (FAP) when compared with surrounding normal tissues. Conversely, overexpression of KLF4 in the human colon cancer cell line RKO, which does not express endogenous KLF4, results in reduced tumorigenesis in vitro and in vivo. KLF4 plays a role in mediating the tumor-suppressive function of APC. KLF4 can down-regulate the level of beta-catenin and can bind directly to the transcriptional activation domain of beta-catenin to inhibit beta-catenin-mediated transcription. KLF4 haploinsufficiency in ApcMin/+ mice lead to significantly more intestinal adenomas than ApcMin/+ mice alone.
In vivo, KLF4 is required for goblet cell differentiation in the intestine and eye conjuctiva. KLF4 has been shown to be down-regulated by Notch pathway and is important in maintaining the normal skin barrier.
Induction of KLF4 significantly reduces the percentage of apoptotic cells following g-irradiation. Upregulation of KLF4 also inhibits expression of the gene encoding the pro-apoptotic protein Bax following DNA damage.
Taken together, these studies place KLF4 in an interesting and important position between the Wnt and Notch signaling pathways, both of which are crucial for intestinal tumorigenesis. Additional studies are likely to further reveal the exact mechanism by which KLF4 mediates the crosstalk functions of these two key pathways in CRC. 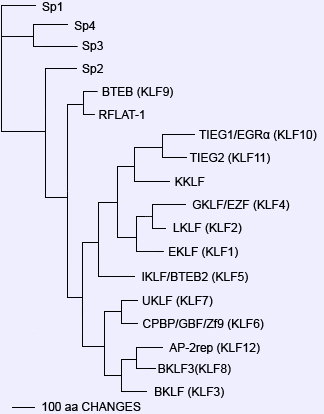 KLF4 belongs to the SP1 / KLF transcription factor family that is highly conserved among species (from Drosophila to human). Mouse KLF4 and is 90% identical to human KLF4. The carboxyl terminus of KLF4 contains three C2H2-zinc fingers that are most closely related to another member of the family, KLF2.

Entity name
Colorectal Cancer (CRC)
Disease
The relevance of KLF4 in the pathogenesis of human CRC is demonstrated by a significant reduction of KLF4 mRNA levels in colorectal adenoma and adenocarcinoma compared with matched normal colonic tissues. There is also evidence for LOH in a subset of CRC and in a panel of CRC cell lines. Moreover, the 5-untranslated region of the KLF4 gene is found to be hypermethylated in a subset of CRC. Lastly, several point mutations are identified in KLF4 that result in a diminished ability to activate the p21WAF1/CIP1 promoter in some of the CRC cell lines. These studies suggest that KLF4 is a tumor suppressor, at least in a fraction of patients with CRC. Recent studies demonstrating that KLF4 is involved in maintaining centrosome duplication and thus genomic stability further illustrate the mechanism by which KLF4 may be involved in tumor suppression.
Entity name
Goblet cells hypoplasia.
Disease
Mice homozygous for a null mutation in the Klf4 gene die shortly after birth, for unknown reasons. Immediately following birth, Klf4-/- mice have a 90% reduction in the number of goblet cells in their colon, show abnormal expression of the goblet cell-specific marker Muc2, and have abnormal goblet cell morphology.
Entity name
Gastric cancer
Disease
Mutational analysis indicates that the KLF4 gene is subject to deletion, mutation and methylation silencing in a significant proportion of colon and gastric cancers. Conditional Klf4-knockout mouse specific for the gastric epithelium, loss of Klf4 results in increased proliferation and differentiation in the stomach, culminating in precancerous changes altered.
Entity name
Breast cancer
Disease
KLF4 levels are elevated in up to 70% of mammary carcinomas.
Prognosis
Nuclear localization of KLF4 is associated with an aggressive phenotype in early stage breast cancer.
Oncogenesis
Oncogene.
Entity name
Dysplastic oral squamous-cell carcinomas
Disease
KLF4 levels are elevated in oropharyngial dysplastic squamous-cell carcinomas.
Entity name
Squamous cell carcinoma
Disease
Ectopic expression of KLF4 in basal keratinocytes of transgenic mice results in dysplastic lesions that resemble squamous cell carcinoma in situ.