FPR1 is a G protein-coupled receptor (GPCR), originally identified in phagocytic leukocytes, which mediates cell chemotaxis and activation in response to the bacterial chemotactic peptide N-formyl-methionyl-leucyl-phenylalanine (fMLF).
A number of host-derived chemotactic agonists of FPR1 have been identified, including formyl peptides potentially released by mitochondria of ruptured cells, Annexin I produced by activated epithelia, and a neutrophil granule protein, cathepsin G. In addition, functional FPR1 has been detected in cells of nonhematopoietic origin, such as lung epithelial cells and hepatocytes. These findings suggest that FPR1 is involved in a broader spectrum of pathophysiologic processes.

This gene is located in formylpeptide receptor gene cluster region including FPR1, FPR2 and FPR3 on chromosome 19p.

All three genes, FPR1, FPR2 and FPR3, are clustered on chromosome 19q13.3. FPR1 is encoded by a 6 kb single copy gene. The open reading frame is intronless but the 5 untranslated region resides in three exons. The start sites for transcription and translation are separated by approximately 5 kb. The FPR1 gene contains three Alu repeats, one in each intron and a third in the 3 flanking region. The proposed promoter contains a nonconsensus TATA box and an inverted CCAAT element. 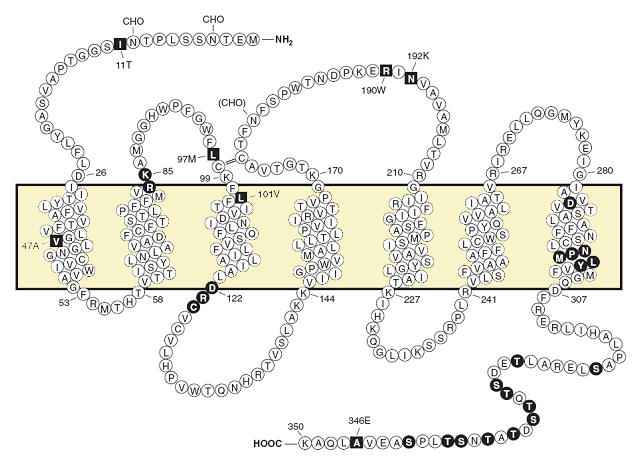 The protein sequence of the FPR-98 isoform (Leu110, Ala346) is shown (Boulay et al.,1990; Ye et al., 2009). The transmembrane domains (TMs) are predicted based on hydrophobicity of the amino acid sequence and on similarities to the rhodopsin structure. The amino acids that form the boundaries of the transmembrane domains are numbered. One-letter amino acid code is used. The square blocks in reverce color represent positions at which amino acid substitutions result from polymorphisms, including amino acids 11 (Ile/Thr), 47 (Val/Ala), 101 (Leu/Val), 190 (Arg/Trp), 192 (Asn/Lys) and 346 (Ala/Glu). The circle blocks in reverse color indicate amino acids with known functions as follows. Arg84, Lys85, and Asp284 are critical for high-affinity binding of fMLF (Mills et al., 1998; Quehenberger et al., 1997). Asp122, Arg123, and Cys124 are the signature sequence for G protein interaction (DRY in many GPCRs). NPMLY in the TM7 are known signature sequence (NPXXY) for receptor internalization (Gripentrog et al., 2000; He et al., 2001). The 11 Ser and Thr residues in the cytoplasmic tail are potential phosphorylation sites for GRK2 and GRK3 (Prossnitz et al., 1995). CHO, carbohydrate, marks the identified and potential (in parenthesis) sites for N-glycosylation. The predicted disulfide bond between Cys98 and Cys176 is marked with double-line (=).

FPR1 has been detected in phagocytic leukocytes, hepatocytes, dendritic cells, astrocytes, microglia cells, and the tunica media of coronary arteries. Becker et al. showed that FPR1 or an antigenically similar receptor is located in a number of human tissues and organs, including secretory cells in the thyroid, adrenals and other glands, the liver, the central nervous system, and neurons in the autonomic nervous system. FPR1 is also expressed in neutrophils of non-human primates and rodents.

Agonist binding to FPR1 elicits a cascade of signal transduction pathways that involve phosphatidylinositol 3-kinase (PI3K), mitogen-activated protein kinases (MAPK), and the transcription factors nuclear factor-κB and hypoxic inducible factor-1α (HIF-1α). Because of its expression in cells of the immune system and its interaction with bacterial chemotactic peptides, this receptor was thought to participate in host defense against microbial infection. In addition, FPR1 expressed in highly malignant human glioblastoma promotes tumor progression.

In primates, the sequence of FPR1 is highly conserved. Rabbit and mouse FPR1 share 78 and 76% identity with human FPR1 respectively. 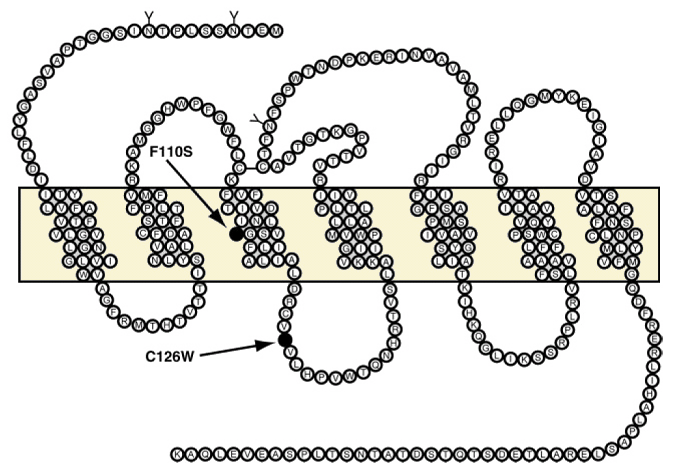 Amino acid sequence of FPR-WT and localization of the F110S and C126W mutations (Seifert et al., 2001). Shown is the two-dimensional structure of FPR-WT (isoform 26) (27). Amino acids are given in one-letter code. The FPR N terminus (top) faces the extracellular space; the FPR C terminus (bottom) faces the cytosol. The transmembrane domains are included in the boxed area. Extracellular consensus sites for N-glycosylation are shown (Y). The positions of the F110S and C126W mutations are indicated (•). There is a disulfide bridge between the first and second extracellular loops. Note that the consensus sites for N-glycosylation are not altered in FPR-F110S and FPR-C126W. 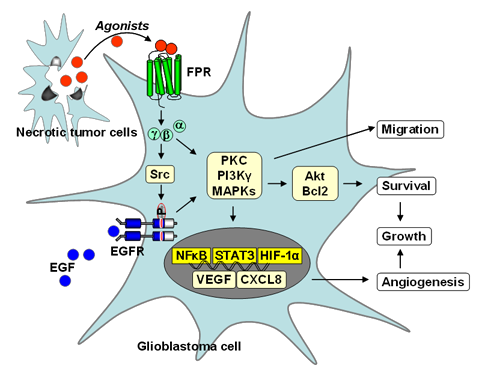