Review on RACGAP1, with data on DNA, on the protein encoded, and where the gene is implicated.

A schematic illustration of RACGAP1 gene The RACGAP1 gene is shown with red bar and it is flanked by AQP6 and AQP5 genes on the left side and ASIC1 and SMARCD1 genes on the right side. RACGAP1s location is on 12q13.12, and it has 22 exons (NCBI).

FKSG42 is a RACGAP1 pseudogene as reported by HGNC. It is located in 12q12 chromosome and it has 1 exon.

RACGAP1 protein plays an important role in the Rho GTPase activation cycle. In fact, it binds activated forms of Rho GTPases and stimulates GTP hydrolysis. Thus, it inhibits Rho-mediated signals. Regarding RACGAP1 protein function, it has a regulatory role in the starting of cytokinesis, regulates spermatogenesis and proliferation of neuronal cells, as well as it controls cell growth and differentiation of hematopoietic cells (Boguski M.S. et al., 1993; Hamanaka R. et al., 1994). Lately, it was found that high levels of RACGAP1 is correlated with a worse prognosis in patients with high grade meningiomas (Brennan IM et al., 2007), while Wang SM et al. showed that RACGAP1 upregulation is associated with relapse of hepatocellular cancer (Wang SM et al., 2011). 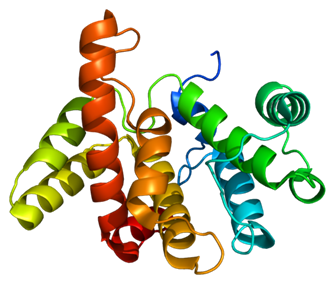 According to Swiss Prot database the protein contains 632 amino acids and its molecular mass is 71027 Da. About proteins structure, it is a heterotetramer of two of RACGAP1 and KIF23 ID: 41068> (Kinesin Family membre 23) molecules. It is found in the centralspindlin complex, a motor complex required for the assembly of the mitotic spindle (Nature Reviews Molecular Cell Biology, 2009). It is associated with alpha-, beta- and gamma-tubulin and microtubules. The protein interacts via its Rho-GAP domain with RND2 (Rho family GTPase 2) and PRC1 (Protein Regulator of Cytokinesis). Its GAP activity towards CDC42 (Cell Division Cycle42 effector protein) is inhibited by interaction with PRC1 in vitro, which may be important for maintaining a normal spindle morphology. Furthermore, RACGAP1 associates with AURKB (Aurora Kinase B) during M phase and interacts with SLC26A8 (Solute Carrier family 26 member 8) via its N-terminus and RAB11FIP3 (RAB11 Family Interacting Protein 3). During anaphase and cytokinesis, the protein binds to ECT2 (Epithelial Cell Transforming 2) in a microtubule-dependent manner and it is enhanced by phosphorylation by PLK1 (Polo-like Kinase 1). Lastly, it interacts directly with KIF23.

It is highly expressed in the testis, thymus, placenta, gastrointestinal tract, urinary tract, uterus, cervix, skin, tonsil, nasopharynx, bone marrow and lymph nodes. It is found at lower levels in spleen and peripheral blood lymphocytes. In testis, RACGAP1 expression is restricted to germ cells with the highest levels of expression found in spermatocytes. Its expression is monitored during the cell cycle and it peaks at G2/M phase (Toure A et al., 1998; Toure A et al., 2001; Naud N et al., 2003; Zhang P et al., 2015).

RACGAP1 colocalizes with RND2 in Golgi-derived proacrosomal vesicles and the acrosome. During interphase, it is localized to the nucleus and cytoplasm along with microtubules, while in anaphase it is organized to the central spindle and in telophase and cytokinesis to the midbody. Colocalization of RACGAP1 with RhoA occurs at the myosin contractile ring during cytokinesis and with ECT2 at the mitotic spindles during anaphase/metaphase, at the cleavage furrow during telophase, and to the midbody at the end of cytokinesis. Lastly, it neighbours with CDC42 to spindle microtubules from prometaphase to telophase (Mishima M et al., 2002).

MgcRacGAP is a component of the central spindlin complex that serves as a microtubule-dependent and Rho-mediated signaling, required for the myosin contractile ring formation during the cytokinesis. To specify, it helps for a proper attachment of the midbody to the cell membrane during cytokinesis. GAP1 plays also key role in controlling cell growth and differentiation of hematopoietic cells, adipocytes and myoblasts. It may regulate the cell proliferation in the nervous system as well as the sulfate transport in male germ cells. In addition, MgcRacGAP, by inhibiting the activity of RAC1 and CDC42, which act on the microtubule and actin cytoskeleton, controls cell proliferation, adhesion and motility. It may play a role in regulating cortical activity throughRHOA-mediated signals during cytokinesis. At last, it is found to be essential for the early stages of embryogenesis (Toure A et al., 1998; Kawashima T et al., 2000; Hirose K et al., 2001; Yuce O et al., 2005).

The mammalian Polo-like kinase PLK1 (Hamanaka R et al., 1994) was shown recently to be an essential activator of RhoA (Brennan IM et al., 2007; Burkard ME et al., 2007; Petronczki et al., 2007; Santamaria et al., 2007). Inhibition of PLK1 prevents ECT2 association with HsCyk-4 (alias of RACGAP1) and blocks its recruitment to the central spindle (Brennan IM et al., 2007; Burkard ME et al., 2007; Petronczki et al., 2007; Santamaria et al., 2007), proposing that PLK1 might serve as a stimulatory kinase. Benjamin A. Wolfe et al., examined the mechanism by which PLK1 stimulates association between ECT2 and HsCyk-4 during anaphase to trigger the cytokinesis (Benjamin A. Wolfe et al., 2009). In the meanwhile, Lowery DM and colleagues found that the N terminus (Nt) of HsCyk-4 contains seven consensus motifs for PLK1 phosphorylation (Lowery DM et al., 2005). Benjamin et al., trying to determine which sites are phosphorylated by PLK1, confirmed that only peptides containing amino acids 139-174 of HsCyk-4 did so. Within this region, they took up four hypothetical PLK1 phosphorylation sites (Ser149, Ser157, Ser164, and Ser170), which are well conserved across species, and they altered them. Mutation of any of these four residues was insufficient on its own to prevent PLK1-stimulated binding. The results show that, in vitro phosphorylation of HsCyk-4-4A (amino acids 111-188) by PLK1 was dramatically reduced. Conversely, they mutated these four serine residues to Asp (HsCyk-4-4D) so as to mimic the phosphorylated state, and generated a form of HsCyk-4 able to associate with ECT2-BRCT even in the absence of PLK1 phosphorylation.Based on these results they conclude that PLK1 phosphorylates multiple serine residues in the N terminus of HsCyk-4 in vitro, thereby stimulating its association with ECT2.