The human TIGAR coding sequence consists of 813 bp from the start codon to the stop codon. There are no splicing variants reported.

A pseudogene of the ribosomal protein S15 has been located in the region 8981..9473 by computational analysis using a gene prediction method, but there is not experimental data proving it. 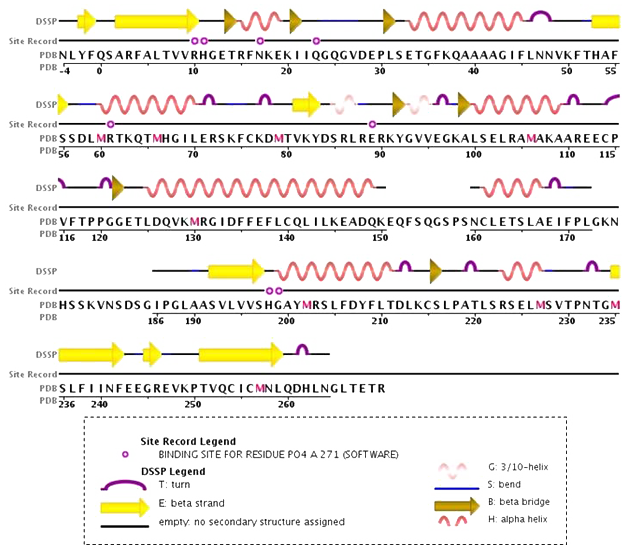 Figure 2. Diagram of TIGAR structure from PDB (entry number: 3DCY). The PDF file does not contain information about the parts of the sequence that are not underlined.

Human TIGAR protein consists of 270 aminoacids, with a molecular weight of 30063 Da. It is composed of a bisphosphatase active site in which two histidines, His-11 and His-198, and one glutamic acid, Glu-102, are key residues for its function. TIGAR catalytic domain belongs to the histidine phosphatase superfamily of proteins, a conserved group of proteins which contain a domain with a histidine forming a phosphoenzyme transiently during the catalysis (Rigden, 2008). This domain shares similarity with enzymes of the phosphoglycerate mutase family (PGAM) and with the bisphosphatase domain of 6-phosphofructo-2-kinase/fructose-2,6-bisphosphatase (PFK-2/FBPase-2), in which the three aminoacids in the catalytic domain are conserved.
More information about TIGAR protein can be found in Uniprot Q9NQ88.
Human TIGAR structure contains different motifs as represented in the image below (PDB reference 3DCY).
The crystallized structure of Danio rerio TIGAR is available in PDB (3E9D reference) and was published by Li and Jogl, 2009.

Figure 3. Human TIGAR crystalized structure visualization in Jmol software. His-11 is represented in white, Glu-102 is in purple, His-198 is colored green and C and N terminus are represented in red and blue, respectively. A) General protein view. B) Zoom of the visualization to the catalytic core, with the two histidines represented and the phosphate group painted following the consensus-based coloring of atoms. C) Protein surface and inside-core representation. The central core of the protein is composed by a six-stranded mixed β sheet flanked by α helices on both sides.

TIGAR mRNA is expressed in all the tissues in which it has been analysed and it is overexpressed in several cancer cell lines such as T-lymph Jurkat cancer, kidney HEK-293, liver HuH-7 and HepG2, lung A549, colon RKO, bone U2OS, brain GAMG, prostate LnCap, cervix HeLa and breast MCF7.
All this information can be found in GeneCards (sections proteins and expression).

TIGAR is mainly localized in the cytoplasm. Under hypoxic conditions, a relocalization of the protein linked to HK-2 (hexokinase 2) in the outer mitochondrial membrane has been described (Mathupala et al., 2009; Cheung et al., 2012). 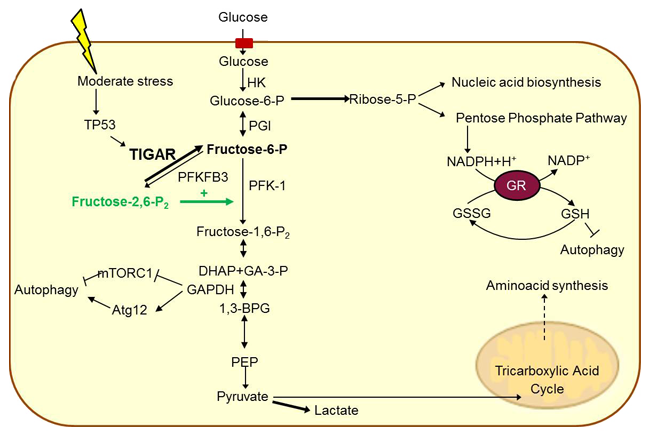 Activation and regulation
TIGAR belongs to that group of TP53 target genes that become rapidly activated by low levels of stress. There are two possible TP53 binding sites in TIGAR gene: one upstream of the first exon (BS1) and one within the 1st intron (BS2), which is the most efficient one and has been validated by chromatin immunoprecipitation (ChIP) analysis (Bensaad et al., 2006).
In an experimental approach, TIGAR was induced by Actinomycin D and Adriamycin (Bensaad et al., 2006), two well-known activators of TP53, and also by Nutlin-3a, an antagonist of Mdm2 (Hasegawa et al., 2009). Other stimuli that have been described to trigger TIGAR expression are radiotherapy (Peña-Rico et al., 2011), glutamine (Ko et al., 2011), chemotherapy (Madan et al., 2012), UV light (Madan et al., 2012), TNFα and radiotherapy mimetics (Sinha et al., 2013).
When DNA damage occurs, TP53 is expressed either to repair DNA or lead the cell towards apoptosis. High ROS levels can compromise DNA stability which, in turn, could help cells to accumulate mutations and become tumorigenic. As TIGAR reduces ROS levels, it has been proposed as a tumor suppressor gene, although it should be taken into account that, as TIGAR can help tumor cells survival, it could act as an oncogene in some situations. TP53 is able to suppress tumor development when mechanisms of apoptosis, senescence and cell-cycle arrest are impeded. This supports the idea that metabolism, and thereby TIGAR, has a key role in cancer development (Li et al., 2012; Valente et al., 2013).
TIGAR expression can also be modulated in a TP53 independent manner, as results from studies with the TP53 null T98G and H1299 cell lines suggest (Bensaad et al., 2006; Peña-Rico et al., 2011). The mechanisms implicated in the regulation of TIGAR expression in the absence of TP53 are unclear. The CRE-binding protein (CREB) has been described to regulate TIGAR expression through a CRE-binding site at the TIGAR promoter, which was first annotated by bioinformatic analysis and then confirmed by electrophoretic mobility shift assay (EMSA) and ChIP. CREB knockdown reduced enhanced promoter activity and TIGAR expression; whereas CREB overexpression resulted in enhanced promoter activity and TIGAR expression levels (Zou et al., 2013). Another transcription factor, SP1, was found to bind to TIGAR promoter in a SP1-binding site located in a very short region (-56/-4) both in vitro and in vivo, and was considered a key factor for proper basal activity of TIGAR promoter (Zou et al., 2012). Recently, some authors have identified HIF-1α as a potential regulator of SCO2 and TIGAR gene expression suggesting the involvement of P300/CBP-associated factor (PCAF) in differential recruitment of HIF-1α and p53 to the promoter of TIGAR and/or SCO2 genes in response of hypoxia in tumoral cells (Rajendran et al., 2013).

Genomic variants
There are 878 SNP variants described but none of them have clinical significance described (GeneCards). 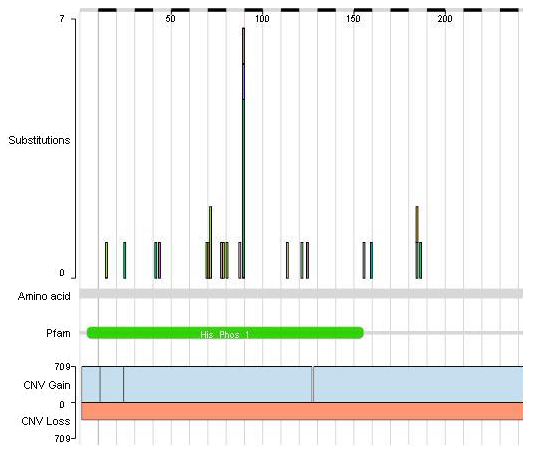