No human pseudogene known. A mouse Akt2 pseudogene was cloned and mapped to proximal mouse chromosome 11 by fluorescence in situ hybridization.

AKT proteins contain an amino terminal pleckstrin homology (PH) domain, followed by a short helical region and kinase domain that terminates in a regulatory hydrophobic motif. Activation of AKT kinases is a multi-step process that involves both membrane translocation and phosphorylation. AKT activation occurs by means of stimulation of the growth factor receptor-associated phosphatidylinositol 3-kinase (PI3K). PI3K generates 3-phosphorylated phosphoinositides, i.e., phosphatidylinositol-3,4,5-trisphosphate (PIP3) and phosphatidylinositol-3,4-bisphosphate (PIP2) at the plasma membrane. Both phospholipids bind with high affinity to the PH domain, mediating membrane translocation of AKT. At the membrane, AKT2 is phosphorylated at two sites, threonine 309 (T309) and serine 474 (S474).

Predominantly cytoplasmic; also found at the plasma membrane and in the nucleus following its activation.

AKT proteins mediate a variety of cellular functions, ranging from control of cell proliferation and survival to modulation of intermediary metabolism and angiogenesis. Such pleiotropic effects are the consequence of phosphorylation of numerous substrates, some of which are listed below. Most substrates share the consensus sequence for AKT phosphorylation, RXRXXS/T. For example, activated AKT exerts anti-apoptotic activity in part by preventing the release of cytochrome c from mitochondria, and phosphorylating and inactivating the pro-apoptotic factors BAD and pro-caspase-9. AKT also activates IkappaB kinase (IKK), a positive regulator of NF-kappaB, which results in the transcription of anti-apoptotic genes. AKT phosphorylates and inactivates FOXO transcription factors, which mediate the expression of genes critical for apoptosis, such as the Fas ligand gene.
AKT activation mediates cell cycle progression by phosphorylation and inhibition of glycogen synthase kinase 3 beta to inhibit cyclin D1 degradation. AKT phosphorylates the cell cycle inhibitors p21WAF1 and p27Kip1 near the nuclear localization signal to induce cytoplasmic retention of these cell cycle inhibitors. Moreover, phosphorylation of AKT kinases also results in increased translation of cyclin D1, D3 and E transcripts.
AKT activates the downstream mTOR kinase by inhibiting a complex formed by the tumor suppressor proteins TSC1 and TSC2, also known as hamartin and tuberin, respectively. mTOR broadly mediates cell growth and proliferation by regulating ribosomal biogenesis and protein translation and can regulate response to nutrients by restricting cell cycle progression in the presence of suboptimal growth conditions.
AKT signaling also contributes to other cellular processes considered to be cancer hallmarks. AKT promotes the phosphorylation and translocation of Mdm2 into the nucleus, where it downregulates p53 and thereby antagonizes p53-mediated cell cycle checkpoints. AKT signaling is linked to tumor cell migration, and it contributes to tumor invasion and metastasis by promoting the secretion of matrix metalloproteinases. Moreover, vascular endothelial growth factor (VEGF) effects on cell survival have been shown to be mediated by the Flk1/VEGFR2-PI3K-AKT pathway. In other cellular processes, AKT has been shown to phosphorylate human telomerase reverse transcriptase (hTERT), thereby stimulating telomerase activity and replication. Collectively, these findings implicate up-regulation of the AKT pathway in many aspects of tumorigenesis.

Insulin resistance and a diabetes mellitus-like syndrome have been described in knockout mice lacking Akt2.

Individuals carrying a G-to-A transition in the AKT2 gene resulting in an Arg-to-His substitution at codon 274 (R274H) were found to be markedly hyperinsulinemic. However, a large case-control study showed that variation in and around the AKT2 locus is unlikely to contribute significantly to increased risk of type 2 diabetes.
Mutations in AKT2 are uncommon in human tumors. For example, AKT2 mutations have been reported in 1 of 51 gastric carcinomas and 2 of 79 lung carcinomas. The mutations consisted of one missense mutation and 2 splice site mutations in an intron.

Entity name
Various cancers
Prognosis
Frequent activation of AKT has been reported in a broad range of human cancers including various carcinomas, glioblastoma multiforme, and hematological malignancies. In some of these tumor types, AKT activation has been shown to correlate with advanced disease and/or poor prognosis. AKT is a major mediator of survival signals that protect cells from undergoing apoptosis and, thus, is a potentially important therapeutic target. Ovarian cancer cell lines with either constitutive AKT1 activity or AKT2 gene amplification have been shown to be highly resistant to paclitaxel compared to cells with low AKT levels. 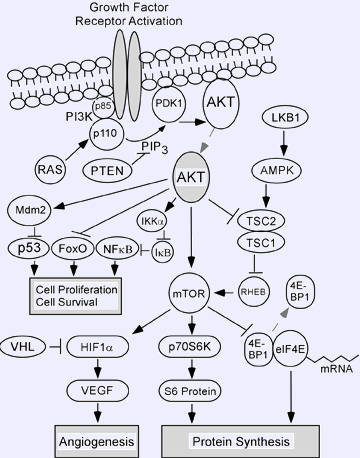 Hyperactivation of AKT kinases have been reported in a wide assortment of human solid tumors and hematological malignancies. Activation of growth factor receptors either by ligand stimulation or receptor overexpression/mutation is one of the mechanisms leading to the upregulation of AKT signaling. Other mechanisms include activation of oncoproteins and inactivation of tumor suppressors intersecting the AKT signal transduction pathway. AKT is now known to be a central player in a signaling pathway consisting of many components that have been implicated in tumorigenesis, including upstream phosphatidylinositol 3-kinase (PI3K) and PTEN (Phosphatase and Tensin homologue deleted on chromosome Ten). Several proteins, such as AKT, eIF4E, and the subunits of PI3K, can act as oncoproteins when activated or overexpressed. Germline mutations in PTEN, LKB1, TSC2/TSC1, and VHL are linked with different dominantly-inherited cancer syndromes. Each of these tumor suppressors is a negative regulator of the AKT pathway which, when deregulated, results in altered translation of cancer-related mRNAs that regulate cellular processes such as cell cycle progression, growth, cell survival, invasion, and communication with the extracellular environment.
Oncogenesis
In 1992, amplification and overexpression of AKT2 was reported in a subset of ovarian carcinomas. AKT2 was shown to be amplified and overexpressed in 2 of 8 ovarian carcinoma cell lines and 2 of 15 primary ovarian tumors. Recently, amplification of AKT2 was found in 18.2% of high-grade ovarian carcinomas.
Amplification and/or overexpression of AKT2 was reported in 10-20% of primary pancreatic carcinomas and pancreatic cancer cell lines. PANC1 and ASPC1 cell lines exhibited 30-fold and 50-fold amplification of AKT2, respectively, and highly elevated levels of AKT2 RNA and protein. As an early indication of the potential importance of molecularly targeting the AKT pathway, AKT2 expression and tumorigenicity of PANC1 cells in nude mice was markedly inhibited by transfection with an antisense AKT2 construct but not with a control AKT2 construct in the sense orientation. Through the use of in vitro kinase assays, activation of the AKT2 kinase has been observed in about 40% of ovarian and pancreatic cancers.