ACVRL1 is a protein coding gene and in human it is constituted by 10 exons. All exons but the first are coding exons. ACVRL1 transcript variants mRNA3 and mRNA4 include 11 exons, through the presence of a cryptic non-translated exon upstream of the canonical exon 1 (Garrido-Martin et al., 2010).

Gene database underlines the presence of two different ACVRL1 transcripts, which both translate into the same protein isoform. The second transcript variant is the shortest one and differs from the first one in the 5UTR region, due to the presence of an upstream in-frame start codon, poorly conserved in the population. Nevertheless, in 2010 two new transcripts were discovered in HUVEC cells. These new variants, called mRNA3 and mRNA4, begin the transcription +1 nucleotide upstream , respectively at -510 and -470 positions, adding a cryptic non translated exon, that doesnt affect the protein ORF (Garrido-Martin et al., 2010).
The promoter region of ACVRL1 (5 proximal region: -1035/+210) was characterized by Garrido-Martin et al., 2010. This region lacks TATA/CAAT boxes but contains a high number of GC-rich Sp1 consensus sites. It also shares different putative regulatory elements with other endothelial-specific genes. These motifs includes: Ets (E26-Transformation-Specific), KLF (Krüppel-Like Factor), NFkB (Nuclear Factor kappa-light-chain-enhancer of activated B cells), E2F (Elongation Factor 2), one Smad binding element (SBE), RXR (Retinoid X Receptor) and HIF (Hypoxia Inducible Factor). Moreover, the authors demonstrated that methylation status of CpG islands modulates Sp1 transcription of ACVRL1 in endothelial cells.
In 2013, it has been demonstrated that ubiquitin E3 ligase, EDD, can down-regulate ACVRL1 expression in HeLa and HUVEC cells (Chien et al., 2013).

Activin A receptor, type II-like kinase 1 (also called ALK1, Uniprot entry P37023, protein family (pfam) 01064 of Activin types I and II receptor domains), is a serine-threonine kinase and it acts as a type I receptor for the Transforming Growth Factor-β / Bone Morphogenetic Protein (TGF-β/BMP) superfamily of ligands. It includes 503 amino acids, with residues 1-21 forming a leader sequence which targets the protein to the membrane. The extracellular domain includes amino acids 22-118 and it is followed by a 23 amino acid long transmembrane domain (residues 119-141). The intracellular domain comprises residues 142-503, with a GS domain (residues 172-201) and the protein kinase domain (residues 202-492).
The crystal structure of ALK1 ectodomain (Figure 1a) and of the intracellular kinase domain (Figure 1b) have been recently determined (PDB ID: 4FAO and 3MY0, respectively) (Townson et al., 2012).
Like all type I and type II receptors, ALK1 shows a general fold resembling a class of neurotoxins known as three-finger toxins and hence called "three-finger toxin fold". This fold is comprised from β-strands stabilised by disulphide bonds formed by conserved Cys residues. Three pairs of anti-parallel β-strands are curved to generate a concave surface. Despite the common architecture and the cluster of conserved Cys residues, very little sequence identity and no functional overlap exist between the two types of receptors.
BMPs consist of a Cys knot characterised by three pairs of highly conserved disulphide bonds in which one traverses through a ring formed by the other 2. This fold can be described as a hand with a concave palm side and two parallel β-sheet forming 4 fingers, with each β-strand being likened to a finger. Finger 2 leads to a helix "wrist" region. In the dimeric ligand the 4 fingers extend from the Cys core of the protein like butterfly wings. Binding of type I receptors occurs near the α-helix on the concave side at the junction between the two subunits (Kirsch et al., 2000), whereas binding to type II receptors happens on the convex side of the hand near the "fingertips" (Greenwald et al., 2003; Thompson et al., 2003). 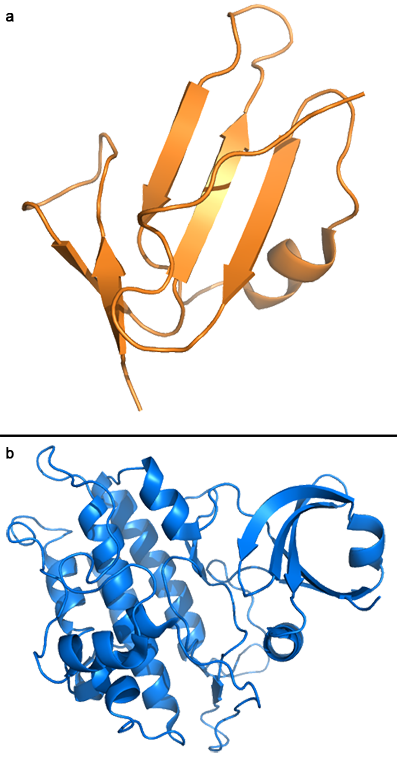 Figure 1: Structures of ALK1 ectodomain (a) and of the kinase domain (b).

ALK1 is predominantly expressed on the endothelial cells surface of arteries. According to EBI gene expression database, ALK1 levels are reduced in non-small cell lung cancer tissue, and increased in monocytes exposed to infections by Francisella tularensis novocida and by Porphyromonas gengivalis.

ALK1 activation, triggered by its physiological ligand BMP-9, can be pro-angiogenic or anti-angiogenic, depending on the experimental system considered. Thus, inhibition of primary cells (HMVEC-D, HUVEC and endothelial cells) proliferation was observed upon activation of the receptor, suggesting that this signaling pathway is involved in the resolution phase of angiogenesis, during which endothelial cell proliferation and migration stop. Disruption of the pathway would therefore lead to persistent proliferation of endothelial cells with the lack of a correct morphogenesis.
On the other hand, MESEC (mouse embryonic- stem-cell-derived endothelial cells) and MEEC (mouse embryonic endothelial cells) cells are stimulated to proliferate by ALK1 activation and BMP9 stimulates angiogenesis in a matrigel plug assay and in a tumour model in vivo. Also, cancer cells produced tumours whose size and vascularization were reduced by 50% in ALK1+/- heterozygous mice compared with tumours implanted in wild-type littermates. In addition, a soluble ALK1-Fc fusion protein known as Dalantercept (ACE-041) showed an anti-angiogenic effect by reducing vascular density and perfusion of the tumour burden in model mice of endocrine pancreatic tumorigenesis and mice bearing 786-0 and A498 human renal cell carcinoma (Wang et al., 2012).
This contradictory findings may be explained by the site- and context-dependent balance of the synergic proangiogenic effects of BMP-9 and the lower affinity ALK1 ligand TGF-β, but the assumption has to be confirmed.
Recent studies also report a role for ALK1 in cancer independent from its effects on angiogenesis, enhancing the cell migration and invasion potential in cancers like squamous cell carcinomas of the head and the neck or haepatocarcinomas (Hu-Lowe et al., 2011; Chien et al., 2013; Sun et al., 2013).
ALK1 signalling through SMAD 1/SMAD 5/SMAD 8 seems to induce chondrocytes hypertrophy in cartilages by an effect mediated by the interaction with the canonical Wnt signaling (van den Bosch et al., 2014).
Again, in other kind of cancers ALK1 activation seems to be protective, as assessed for instance in in vitro models of pancreatic cancers (Ungefroren et al., 2007).

ALK1 shares with other type I receptors a high degree of similarity in the GS domain, in the following serine-threonine kinase subdomains and in the short C-terminal tail (ten Dijke et al., 1994), but the extracellular domain shows a peculiar amino acidic sequence.

No somatic mutations of ACVRL1 have been found in human cancers.