Review on AARD, with data on DNA, on the protein encoded, and where the gene is implicated.

A potential androgen response element (ARE) sequence (u001e1637 tou001e1632, TGTTCT) was found in the mouse Aard promoter (see below). 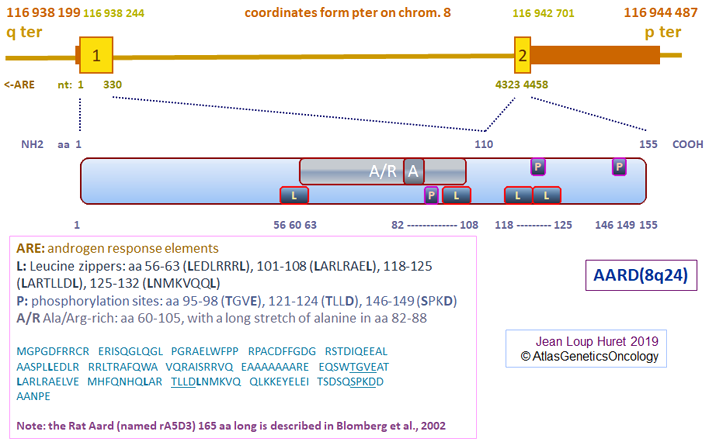 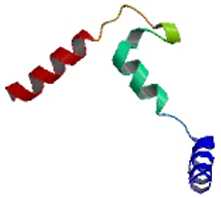 AARD is expressed prenatally in male gonads, and in most organs postnatally (see below).

AARD is detected in lipid droplets (The Human Protein Database).

The presence of leucine-zipper domains and phosphorylation sites suggest that AARD is a transcription factor, and may be involved in signal transduction pathways (Blomberg et al., 2002).
Aard is upregulated early during postnatal rat lung development, but also in the heart, kidney, liver, and testis, but the developmental expression pattern, although comparable in levels of expression, was different -in term of timing- in each of the tissues studied (Blomberg et al., 2002). Aard is one of the 266 or 1083 genes, according to the different studies, upregulated in gonads of male but -not in female- mice embryos. This strong expression was restricted to the sex cords (Menke and Page, 2002; Bouma et al., 2004; Nef et al., 2005; Beverdam and Koopman, 2006). Strong testis-specific expression was also detected in the adult mouse (Svingen et al., 2007). It is also expressed in adult liver, kidney, brain, lung, muscle, heart and bladder of mice (Geng et al., 2017).
AR (androgen receptor) mediates the effects of androgens by binding to the androgen response elements (ARE) of target genes. An ARE (TGTTCT) was identified at position -1637 to -1632 in the promoter region near the mouse Aard transcription initiation site. AR binds this ARE and activates Aard transcription. Aard is directly regulated by AR in Sertoli cells of mouse testis (Geng et al., 2017).