Primary cutaneous diffuse large B-cell lymphoma (PCDLBCL) leg type is an aggressive type of CBCL, characterized by skin lesions mainly on the legs and a predominance of diffuse sheets of centroblasts and immunoblasts. Given the poor prognosis, old age at onset, frequent relapses, and extracutaneous spread, PCDLBCL, leg type is a distinct type of cutaneous lyphoma. Here the clinicopathology of extranodal lymphomas will be discussed.

PCDLBCL, leg type is composed exclusively of large transformed B-cells, most commonly arising in the leg. PCDLBCL, leg type was first reported as a subgroup of PCFCL in 1987 based on its particular histological feature and more aggressive behavior. In 1996, the term "primary cutaneous large B-cell lymphoma of the leg" was proposed, which was used to classify it as a distinctive subgroup in the EORTC classification. In the last WHO-EORTC classification, this entity was finally defined PCDLBCL, leg type to reflect the predominant but not exclusive anatomic location of the lesions (Swerdlow, et al ,2008. Selva, et al, 2017).

Patients present solitary or multiple, rapidly growing, red to bluish-red firm tumors on one or both legs, usually below the knee. In 10%-15% of cases, the lesions are localized at other sites such as the trunk, head-neck, and upper arms. Multiple lesions may be disseminated or aggregated. Extracutaneous sites are often disseminated, most commonly in lymph nodes, bone marrow, and nervous system (Swerdlow, et al , 2008. Selva, et al, 2017).

Histologically, there is a diffuse and dense infiltrate throughout the dermis that often involves the subcutis but is separated from the epidermis by a Grenz zone. The infiltrate mainly consists of confluent sheets of large B-cells with roundish nuclei, prominent nucleoli, and open chromatin resembling centroblasts and immunoblasts. Anaplastic cells are occasionally seen. Mitotic figures are frequently observed. T-cells are rare. PCDLBCL, leg type is usually characterized by a high proliferation rate (>70%) and BCL-6, CD5, CD10, CD30, CD138, and cyclin D1 negativity. 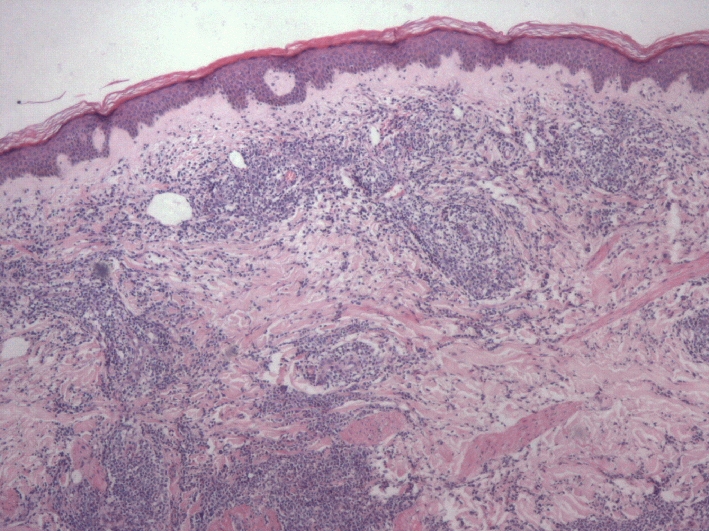 Figure 1. Primary cutaneous DLBCL, leg type. There is a foci and sheets infiltration of lymphoid cells throughout the dermis. A Grenz zone can be seen separated from the epidermis. (HE staining). 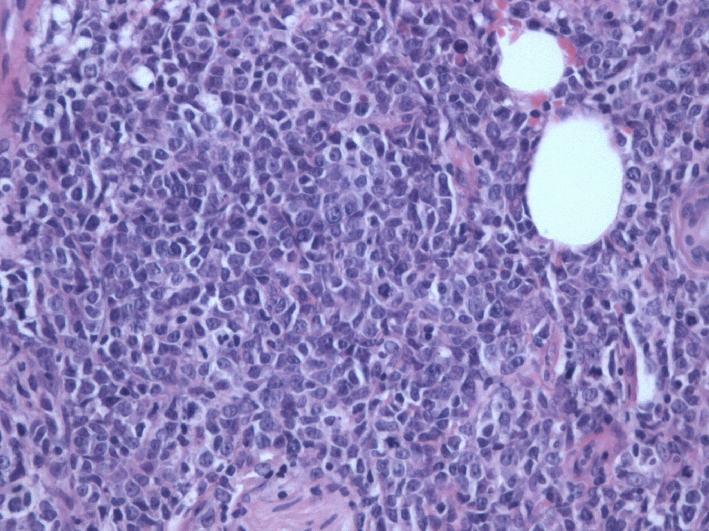 Figure 2. The lymphoid cells are medium to large in size, with oval nuclei and distinct nucleoli. ( HE staining) 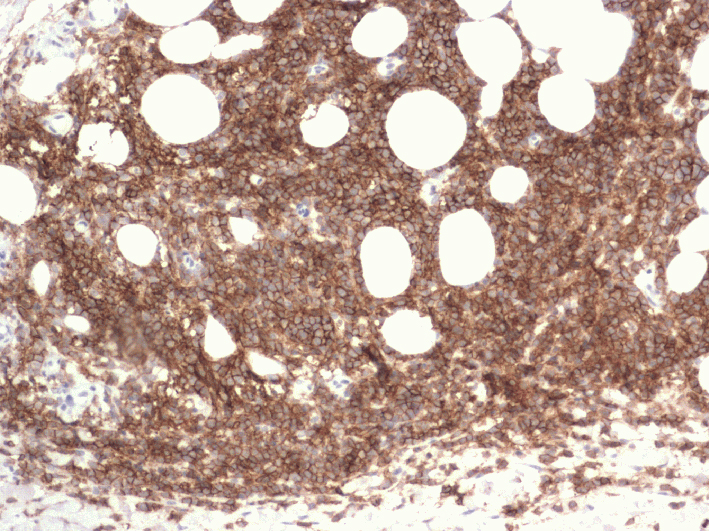 Figure 3. The cells are positive for CD20. (immunostaining) 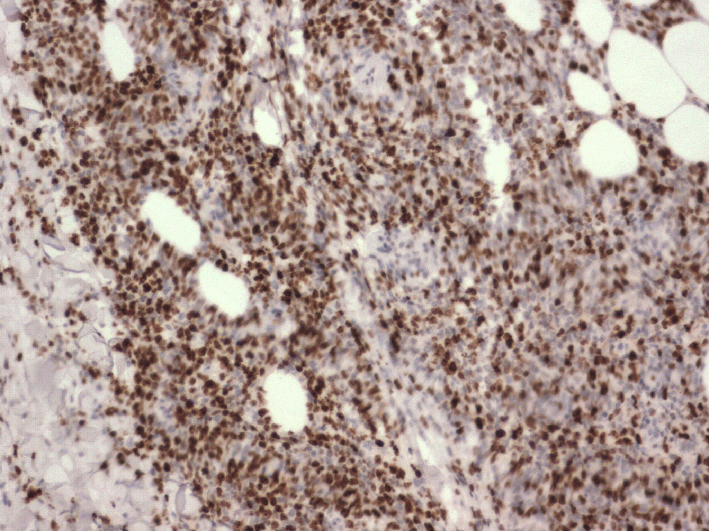 PCDLBCL, leg type is often managed as a systemic lymphoma depending on its staging and location, number of skin lesions, and general status of the patient. Immunochemotherapy with R-CHOP with or without involved-field radiotherapy as the first-line therapy for single, localized, or generalized lesions is recommended. The use of local radiotherapy or rituximab as a single agent can be considered in particular cases. In relapsed cases, the use of protocols for relapsed systemic DLBCLs is recommended (Swerdlow, et al ,2008. Selva, et al, 2017. Wilcox, 2016). Targeting of tumor cells and myeloid-derived suppressor cells using anti-PD-1/ anti -PD-L1 or anti-CD33 antibodies might be a worthwhile new approach to treat PCDLBCL, leg type.( Mitteldorf, et al. 2017)

The prognosis of PCDLBCL, LT is poor and characterized by frequent relapses and extracutaneous spreading. The 5-year survival rate is 40%-55%. A location on the leg and multiple skin lesions are negative prognostic factors. Factors that have been reported to be linked to a worse prognosis are the high expression of MUM1 and FOX-P1, and deletion of the CDKN2A locus on chromosome 9p21 (Swerdlow, et al , 2008. Selva, et al, 2017).