Review on Renal cell carcinoma with t(X;17)(p11;q23) CLTC/TFE3, with data on clinics, and the genes involved.

The tumor was bounded by a calcified fibrous pseudocapsule. The tumor had predominantly a solid, compact nested pattern, as islands of tumor cells were demarcated by fibrovascular septa. More dyscohesive areas yielded a papillary architecture. Focal calcifications, some in the form of psammoma bodies, were frequent, often associated with hyaline nodules. Tumor cells were polygonal with well-demarcated, predominantly clear, voluminous cytoplasm. However, there were scattered areas in which the cells were smaller and others where they demonstrated densely eosinophilic cytoplasm; the latter areas had a nested growth pattern and foci of central necrosis, somewhat reminiscent of hepatocellular carcinoma. Mitoses were sparse.

Immunohistochemical (IHC) analysis showed strong and diffuse nuclear labeling with a polyclonal antibody to the TFE3 C-terminal portion, as seen in other tumors associated with TFE3 gene fusions. Since native TFE3 protein is not detectable in non-neoplastic cells by the same assay, this finding is consistent with constitutive expression of a nuclear fusion protein containing the TFE3 C-terminal portion, such as the predicted CLTC-TFE3 protein. Like most conventional (clear cell) and papillary RCCs, the tumor contained tumor cells were strongly and diffusely immunoreactive for CD10, showing strong cytoplasmic staining with membranous accentuation. However, unlike most typical adult RCCs, IHC with all cytokeratin antibodies (Cam5.2, AE1/3, Cytokeratin 7) and the "RCC" monoclonal antibody yielded negative reactions, though tumor cells did label in one isolated area for Epithelial Membrane Antigen (EMA). Underexpression of common epithelial proteins is a typical feature of Xp11.2-translocation carcinomas. Surprisingly, the tumor was focally immunoreactive for the melanocytic proteins Melan-A and HMB45 but IHC assays for MiTF and S100 protein were negative. While unusual, the immunoreactivity for melanocytic markers can be seen in Xp11 translocation carcinomas. 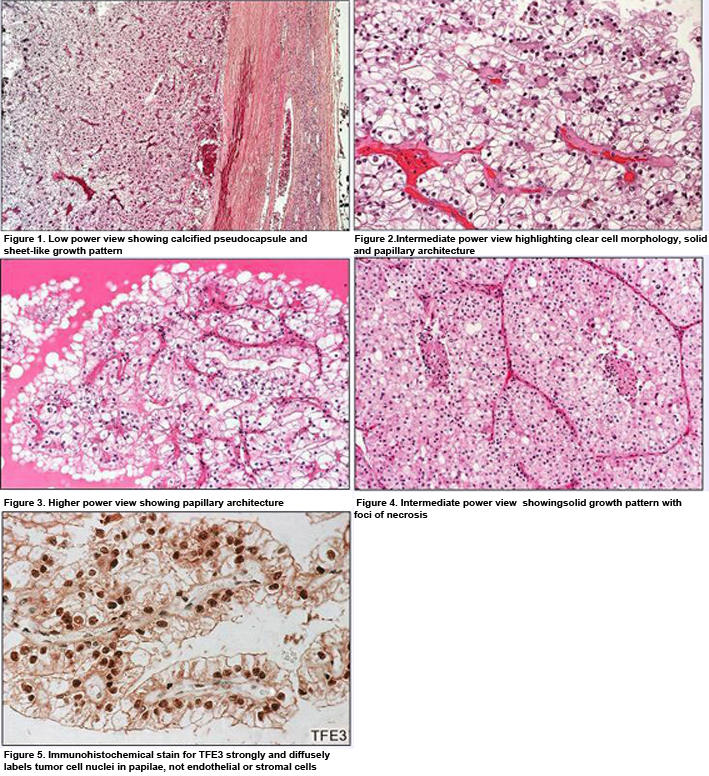 TFE3 is a transcription factor with a basic helix-loop-helix DNA binding domain and a leucine zipper dimerization domain. TFE3 contains a nuclear localization signal, encoded at the junction of exons 5 and 6, which is retained within all known TFE3 fusion proteins. TFE3 protein is 575 amino acids, and is ubiquitously expressed.
TFE3, TFEB, TFEC and Mitf comprise the members of the microphthalmia transcription factor subfamily, which have homologous DNA binding domains and can bind to a common DNA sequence. These four transcription factors may homo- or heterodimerize to bind DNA, and they may have functional overlap.

Clathrin is the major protein constituent of the coat that surrounds organelles (cytoplasmic vesicles) to mediate selective protein transport. Clathrin coats are involved in receptor-mediated endocytosis and intracellular trafficking and recycling of receptors, which accounts for its characteristic punctate cytoplasmic and perinuclear cellular distribution. Structurally, clathrin is a triskelion (three-legged) shaped protein complex that is composed of a trimer of heavy chains (CLTC) each bound to a single light chain. CLTC is a 1675 amino acid residue protein encoded by a gene consisting of 32 exons. Its known domains include a N-terminal globular domain (residues 1-494) that interacts with adaptor proteins (AP-1, AP-2, b-arrestin), a light chain-binding region (residues 1074-1552), and a trimerization domain (residues 1550-1600) near the C-terminus.

Result of the chromosomal anomaly

In the CLTC-TFE3 fusion, the fusion point on CLTC is at amino acid 932 (corresponding to the end of exon 17), thereby excluding the CLTC trimerization domain from the predicted fusion protein. As in other TFE3 gene fusions, the nuclear localization and DNA binding domains of TFE3 are retained in CLTC-TFE3. Based on these features and existing data on other TFE3 fusion proteins, CLTC-TFE3 may act as an aberrant transcription factor, with the CLTC promoter driving constitutive expression.