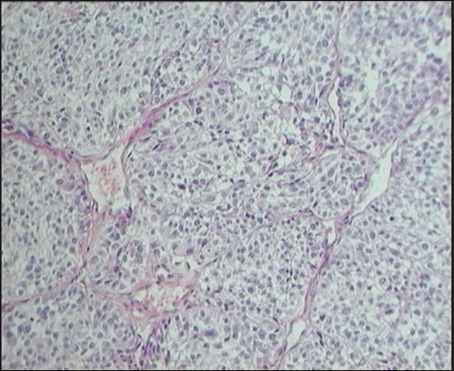 To be distinguished from clear cell sarcoma of the kidney, to which it is unrelated.

slowly growing tumour mass, causing pain or tenderness, particularly frequently (up to 95% of the cases) situated in the extremities, with a predilection for the foot and the ankle. 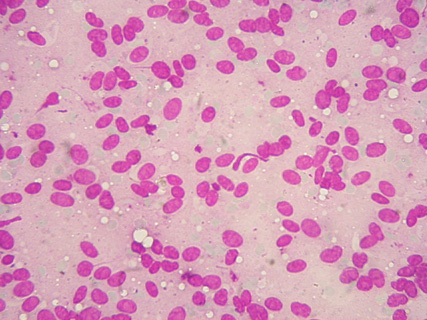 Polygonal or spindle shaped cells with abundant eosinophilic or clear cytoplasm displaying a uniform, nested to fascicular growth pattern, delineated by fibrous septa. Melanin deposits can be demonstrated using specific stains, but is more readily detectable by immunoreactivity against melanoma antigens (e.g. S100 and HMB45) in the vast majority of the cases.

special attention should be paid to the occurrence of late recurrences (median time to recurrence: 4.2 years).

Generally, clear cell sarcoma is characterised by an adverse prognosis, only 40 to 50% of the patients being long-term survivors. As recurrences may occur late, 5-year survival rates tend to misjudge prognosis. Established prognostic features include: tumour size, necrosis and local recurrence.

Fluorescence in situ hybridisation based approaches can be used to demonstrate the t(12;22), using chromosome painting probes or to demonstrate EWSR1 and ATF1 gene rearrangement, using gene specific probes. 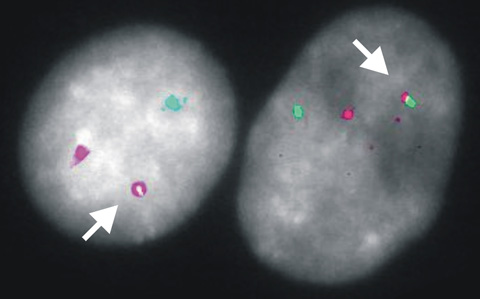 dual colour in situ hybridisation the EWS cosmid G9 (green) and the ATF1 CCS2.2 cosmid (red) demonstrating a juxtaposition of 5 EWS to 3 ATF1 sequences, indicating the presence of a EWS/ATF1 genomic fusion (arrowheads).

Although the t(12;22) has been reported as the sole chromosomal aberration in clear cell sarcoma, most cases display additional cytogenetic anomalies, including +7, +8 and structural and numerical aberrations of chromosome 22.

No variant translocations, creating EWSR1/ATF1 fusion transcripts, have been described.

ATF1 is transcribed from centromere to telomere at 12q13. The coding sequence contains 816bp, comprising 6 exons and spans approximately 43kb.

Result of the chromosomal anomaly

detection protocole: as described by Antonescu et al. (the data given are virtually identical to the Table 1 from the mentioned reference)

The EWS/ATF1 fusion transcript is detectable in up to 90% of the clear cell sarcoma cases. As described in other EWS rearrangements, the transcript fuses 5 EWS to 3 heterologous sequences. The reciprocal ATF1/EWS fusion probably does not contribute to malignant transformation since it is out of frame.

Several alternatively spliced transcripts have been described, the more frequent being the type 1 fusion: EWS exon 8 fused to ATF1 exon 4.