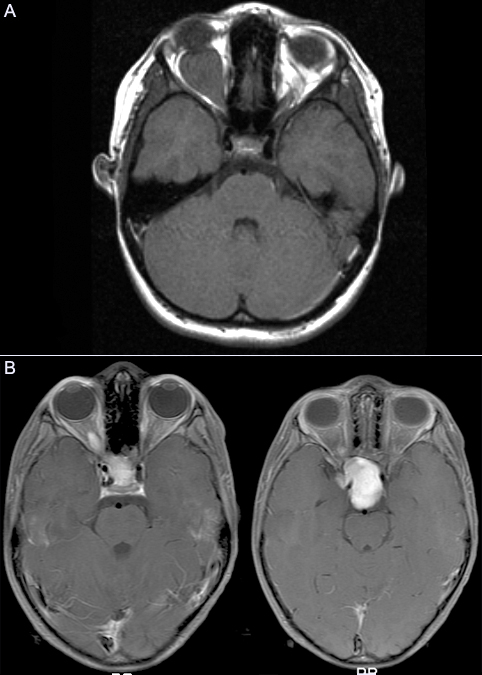 A: T1-weighted axial magnetic resonance images without gadolinium enhancement demonstrating an infiltrating lesion within the right optic nerve with associated proptosis. This lesion is amenable to surgery given the involvement of only one optic nerve with no extension to the optic chiasm.
B: T1-weighted axial magnetic resonance images with gadolinium enhancement demonstrate an enhancing infiltrating mass extending from the right optic nerve to the chiasm and into the suprasellar space. This lesion was treated with chemotherapy and surgery was not indicated.

Optic pathway gliomas (OPGs) are generally low-grade astrocytic tumors that can involve the visual pathways spanning anywhere from the optic nerves to the visual cortex.

OPGs account for 3-5% of all brain tumors in children. Approximately 75% of OPGs are diagnosed within the first decade, and 60% are diagnosed before 5 years of age. The mean age of presentation is 8.8 years. In approximately 50% of patients, an OPG occurs in isolation, without any known chromosomal aberration; however, in the remaining 50% of patients, a diagnosis of von Recklinghausen disease is seen. Von Recklinghausen disease, also known as Neurofibromatosis Type I (NF1), is an autosomal dominant disorder with an incidence of one in 3000-5000 births, but approximately 50% of cases are spontaneous mutations. When associated with NF1, most OPGs are benign, and can be multifocal and bilateral in nature and usually confined to the optic nerves.

Histologically, OPGs are generally low-grade astrocytic tumors that can be placed within the World Health Organization Grade I and can be further categorized as either pilocytic and or fibrillary in nature. The majority of cases are pilocytic.
Typical pilocytic histology consists of compact and biphasic architecture with densely cellular areas alternating with loose cystic regions with characteristic Rosenthal fibers and eosinophilic granular bodies. Mitotic figures usually cannot be identified in most samples, and microcalcifications can be seen in 50% of these tumors.
Recently, however, a new subgroup of OPGs has been defined which has yet to be categorized within the WHO system: pilomyxoid astrocytomas. Pilomyxoid astrocytomas classically show a markedly myxoid matrix with small compact piloid and highly monomorphous cells. Tumor cells are often arranged radially around vessels in a pattern that mimics the perivascular pseudorosettes seen in other pathological samples such as ependymoma. Tumor samples appear solid without the presence of Rosenthal fibers and eosinophilic granular bodies. Satellitosis of the tumor cells in the surrounding neuropil can be seen, as can the presence of mitotic figures, giving these tumors a more aggressive histology. These tumors were once classified along with their pilocytic counterparts, but, as more cases were identified and a more aggressive natural history was observed, these are now recognized as a separate entity. Kotomar et al. reported a series of patients and noted that there was a marked difference in natural history in patients with pilomyxoid histology, where 14% of patients with this variant had cerebrospinal fluid dissemination of their disease, which was not recognized in patients with the pilocytic variant. 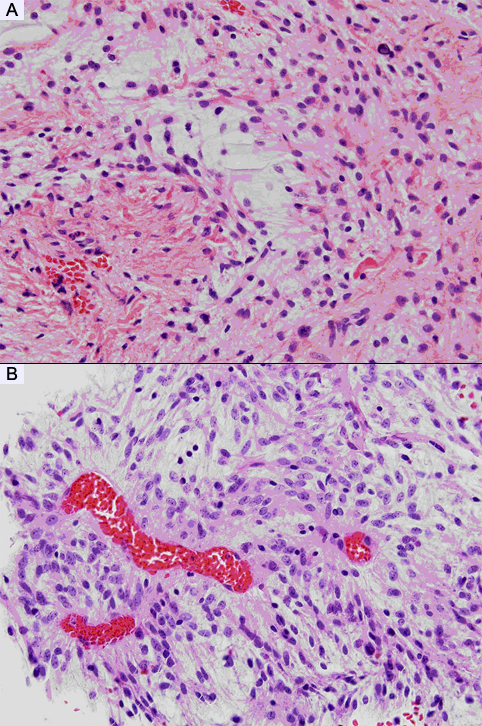 A: Classic appearance of juvenile pilocytic astrocytoma with characteristic compact and biphasic architecture with densely cellular areas alternating with loose cystic regions with characteristic Rosenthal fibers and eosinophilic granular bodies.
B: The pilomyxoid variant differs in that there is a characteristic myxoid matrix with small compact piloid and highly monomorphous cells. Tumor cells are seen arranged radially around blood vessels.

The treatment of OPGs can be divided into four different arms: observation and surveillance, chemotherapy, radiation therapy, and surgical intervention. Because of the variable and unpredictable course of this disease entity, the adequate treatment method has been controversial.

In patients who are asymptomatic and have small tumors that have been incidentally discovered, close observation is the most appropriate avenue. Patients with NF1 that are asymptomatic tend to have a more benign overall course and can be carefully observed. There have been reports in these patients of spontaneous regression of disease. A younger age at diagnosis, however, tends to portend a higher rate of growth over time, so these patients should be monitored very closely if observation is undertaken.

Chemotherapy is considered first-line therapy for OPGs that are symptomatic or those that have shown progressive growth while in the surveillance and observation arm in patients under 3 years of age. This treatment modality does not have the long-term cognitive and endocrinological sequelae seen with the other treatment arms (surgery, radiation). No single chemotherapeutic agent has been identified as the gold standard for the treatment of OPGs; however, the most widely used regimen stems from reports published by Packer et al. Their regimen consists of concurrent carboplatin and vincristine in a 10-week induction phase, followed by 48 weeks of maintenance carboplatin and vincristine. They saw good results with this combination, with a progression-free survival of 75% at 2 years and 50% at 5 years and evidence of regression of tumor in 63% of patients. Other reports describing favorable results with the use of cisplatin and etoposide and temozolomide have appeared in the literature; however, the Packer regimen still seems to be the most widely used to date.

Historically, radiation therapy was the treatment of choice for OPG; however, this treatment has fallen out of favor as the effects of radiation therapy on the developing brain, specifically the cognitive and endocrine sequelae of treatment, have been elucidated. These ill-effects have limited the usefulness of this treatment modality in early childhood, when this disease process tends afflict most patients.
Currently, radiation therapy is reserved for treatment of progressive OPGs in children older than 5-7 years of age who have previously received chemotherapy; however, there is no good Class I data that compares this radiation therapy to other treatment modalities. Treatment of children between the ages of 7 and 10 with radiation as first-line therapy has not been fully evaluated. Children 10 years and older should be treated with radiation therapy at 45-50 Gy. Newer modalities of delivering radiotherapy, such as stereotactic radiotherapy and proton beam radiotherapy, are promising options for radiation therapy in children in that they direct specific beams of radiation to the affected sites, thereby lessening the effects on the entire nervous system and the associated side effects due to radiation while preserving effectiveness. The newer modalities have not been shown in large prospective trials to be superior to standard therapies, so final recommendations can not be made until further testing in a prospective fashion is performed.

Treatment of OPGs with surgical resection is controversial. By their nature, gliomas tend to infiltrate the surrounding structures, and, in most cases, only a subtotal resection can be accomplished. The location of these tumors necessitates that surgical resection will involve sacrificing visual pathway fibers, which can lead to visual impairment. For these reasons, surgical resection is usually limited to cases in which disease is confined to one optic nerve or is causing progressive blindness or disfiguring proptosis, or in those cases in which there is an exophytic chiasmatic component causing obstructive hydrocephalus. Surgical intervention is not generally indicated in those patients with NF1. These patients tend to have diffuse infiltrative disease that has a more benign overall course, with little progression of disease seen after 6 years of age and some reports of spontaneous regression.

The factors that drive the initiation and growth of ONGs without a preexisting diagnosis of NF1 are poorly understood. A potential cellular factor that may play a role in ONG growth is DNA topoisomerase IIa, an essential nuclear enzyme required for chromatin condensation and chromosome segregation during mitosis. Expression of this enzyme appears to correlate with tumor proliferation. On the other hand, OPGs associated with NF1 have been linked to a defective NF1 gene on chromosome 17q11.2. Neurofibromin is the protein product of the NF1 gene, and acts as a tumor suppressor gene. More specifically, neurofibromin is a guanosine triphosphate activating protein for Ras, a vital component of the signal transduction pathway used by growth factors to initiate cell growth and development. Neurofibromin regulates cell growth by inhibiting Ras activity. If no neurofibromin is present, then Ras activity is unchecked. In those patients with NF1, there is one defective allele and one functional allele from a germline mutation. If there is a second hit that causes dysfunction of the functional allele in the somatic cell line, then there is complete absence of neurofibromin and a loss of mitotic control in vulnerable cells, which can develop into a tumor cell line.