Elastofibroma is a rare, slow-growing benign lesion of unknown origin, typically arising from the connective tissue between the subscapular area and the chest wall in elderly persons. It was first reported by Jarvi and Saxen in 1959 and published in 1961. 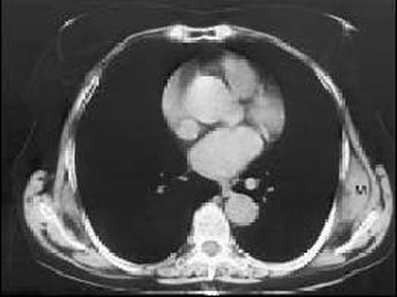 CT of the lower thorax: a semilunar-shaped mass (M) of soft tissue density with foci of fatty attenuations abutting two left-side ribs. A smaller heterogeneous mass is seen at the same location on the right. From Rivka Zissin MD and Myra Shapiro-Feinberg MD. IMAJ 2001; 3: 780. Courtesy of the Editor.

The etiology of this lesion remains unclear. It seems likely that the pseudotumor mass is the product of abnormal elastogenesis rather than of degeneration of preformed fibers. It has been suggested that repeated trauma by mechanical friction of the scapula against the ribs may induce the tumorlike process, since there is an increased prevalence in persons having a history of hard manual labor. A family history of the lesion is reported in up to one-third of cases, suggesting that its origin may be influenced genetically.

Elastofibroma is a rare condition whose exact incidence is unknown. Using computerized tomography, an incidence of 2% has been reported in the elderly, but it is found in autopsies, with lesions 3 cm in diameter or smaller, in 11.2% of men and 24.4% of women. It is more common in women (93%, usually older than 55 years) than men, whereas cases in young adults, teenagers and children have not been reported.

In 99% of reported cases, elastofibroma appears in the periscapsular area as a well-circumscribed large mass, most often not adhering to overlying skin. It is usually located in the lower subscapular area, deep in the rhomboid and latissimus dorsi muscles, firmly attached to the chest wall. Other, but very uncommon, locations include the deltoid muscle, ischial tuberosity, greater trochanter, olecranon, thoracic wall, foot, stomach, mediastinum, orbita and cornea. It is slow-growing. 10% of cases show bilateral lesions. Most patients are asymptomatic; hence the lesion can be overlooked. Elastofibroma has a distinctive appearance in ultrasonography, computed tomography and magnetic resonance imaging. Its MR and CT features are different from those of most other soft-tissue tumors, reflecting entrapped fat within a predominantly-fibrous mass. Although not pathognomonic, the presence of these features in a subscapular lesion in an older patient suggests a diagnosis of elastofibroma. Nonetheless, a biopsy is mandatory to confirm clinical diagnosis, since the subscapular site may be the location of neoplasms such as lipomas and sarcoma, as well as of metastases, extra-abdominal fibromatosis and hemangioma.

Macroscopically the lesion appears as a grey-white spherical mass 5-10 cm in diameter.On microscopic examination, it appears as a dermal unencapsulated tumorlike mass composed of eosinophilic collagen and elastic fibers, with scattered aggregates of fat cells. The elastic fibers have a degenerated, beaded appearance or are fragmented into small petaloid or serrated globules arranged in a linear pattern.
On ultrastructural examination, the elastic fibers appear as granular or fibrillary aggregations of electron-dense material surrounded by an amorphous matrix with scattered microfibrils.

Complete surgical excision is the treatment of choice in symptomatic patients. Recurrence after surgery is very rare. Spontaneous regression without treatment has been observed in exceptional cases.

Elastofibroma is a benign condition, and malignant transformation has not been described.

The prominent cytogenetic feature of elastofibroma is remarkably high karyotypic instability, responsible for structural changes involving virtually all chromosomes. Changes are usually random, and when clonal they have always been observed in no more than two cells. The most frequently nonrandomly affected breakpoint is at the 1p32 band, but breakpoints at 1p36 and 3q21 have been recorded.

One study performed using comparative genomic hybridization showed the presence of DNA imbalances in 33% of the examined cases, with DNA gains at Xq12-q22 being the most common.