The vast majority of both benign and malignant tumours of the stomach are of epithelial origin, with mesenchymal and neuroendocrine tumours being much less common. Gastric adenocarcinoma comprises in excess of 95% of malignant neoplasms of the stomach, and is thus the focus of this overview. Primary gastric lymphoma is the second commonest malignancy affecting the stomach with gastrointestinal stromal tumours (GISTs) and rare tumours, such as carcinoids, accounting for the remainder of cases.

Benign gastric polyps are found incidentally in 2-3% of upper gastrointestinal endoscopies. Their incidence increases with patient age. Small polyps are almost always asymptomatic. Larger polyps may bleed due to erosions or ulceration. Very large distal polyps may produce obstructive symptoms.
Small hyperplastic and fundic gland polyps are relatively common. They are generally regarded as being of no significance although multiple fundic gland polyps with evidence of dysplasia can occur in familial adenomatous polyposis (FAP). Fundic gland polyps and, to a lesser extent, hyperplastic polyps, occur with increased frequency in patients on long-term proton pump inhibitor therapy.
The vast majority of primary lymphomas arising in the stomach are of non-Hodgkins B-cell type. Recent series have demonstrated that low-grade marginal zone lymphomas of mucosa-associated lymphoid tissue (or MALT lymphomas) account for over 50% of cases of primary gastric lymphoma. Historically the predominant histological type was diffuse large B-cell lymphoma (DLBCL).Adenomatous polyps in the stomach usually arise against a background of chronic atrophic gastritis with intestinal metaplasia although they too can occur in FAP. Gastric adenomata are composed of dysplastic epithelium with tubular and/or villous architecture. Polyp size and the grade of dysplasia are felt to be predictors of progression to carcinoma. Because gastric adenomata, like those in the colon, represent a pre-malignant condition, excision (usually possible endoscopically) is the treatment of choice. , Most GISTs are sporadic although a small percentage occur in the context of neurofibromatosis type 1 and the very rare Carney triad (in association with functioning extra-adrenal paragangliomas and pulmonary chondromas). 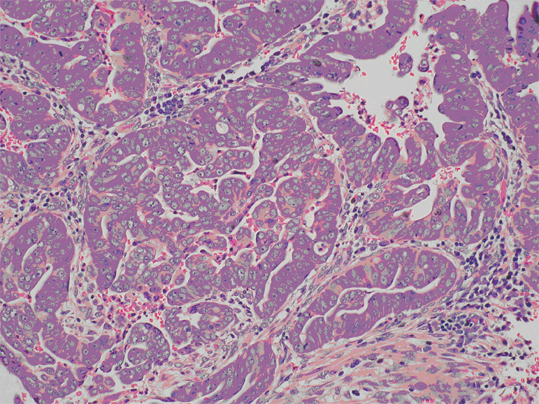 Photomicrograph of a poorly differential intestinal type adenocarcinoma of the stomach. (Courtesy of Prof G Murray, Dept. of Pathology, University of Aberdeen)

Resection with curative intent is the only treatment that will result in long-term survival from gastric adenocarcinoma. Palliative and neo-adjuvant chemotherapy improve survival in selected patients.

In Western countries, 90% of gastric cancers are inoperable at presentation and thus 5-year survival rates at are low. In Japan, where population-based screening takes place, 5-year survival exceeds 50%. , The presence of the cytogenetic aberration t(11;18)(q21;q21) predicts lack of response to H. pylori eradication and is found frequently in H. pylori negative MALT lymphomas. Strong nuclear expression of BCL10, associated with t(1;14)(p22;q32), is also associated with lack of response to antibiotic therapy.

Patients with primary gastric lymphoma may present with non-specific dyspeptic symptoms, early satiety, or evidence of gastrointestinal haemorrhage due to ulcerating disease. Systemic symptoms may be present in advanced stage disease.

Eradication of H. pylori using standard antibiotic regimens results in complete response in around 75% of patients with limited stage MALT lymphoma. Patients who fail to respond to antibiotic therapy, are H. pylori negative, or have nodal disease may be treated in a similar manner to other lymphomas with the use of systemic chemotherapy (e.g. CHOP), immunotherapy (e.g. Rituximab) and/or radiotherapy for localized disease. There is no evidence that surgery is superior to medical therapy alone although surgical intervention may be appropriate in specific scenarios such as gastric outlet obstruction.

Gastrintestinal stromal tumours (GISTs) are the commonest mesenchymal tumours of the GI tract. They are defined by the expression of CD117 ( c-KIT ), a receptor tyrosine kinase. Gain-of-function mutations in KIT or the platelet derived growth factor alpha gene ( PDGFA ) are critical to GIST tumourigenesis. Around 60% of GISTs arise in the stomach and approximately 25% of gastric GISTs display clinically malignant behaviour. GISTs, however, account for only 1-3% of malignant tumours of the stomach.

Small GISTs may be asymptomatic or found incidentally at upper GI endoscopy. Acute or chronic gastrointestinal haemorrhage, due to ulceration of the gastric mucosa superficial to a GIST, is the commonest clinical presentation. Large GISTs may produce symptoms of gastric outlet obstruction or present with pain/dyspepsia, early satiety and nausea.

Gastric GISTs are highly cellular and tend to be of either spindle cell or epithelioid subtypes. The distinction between benign and malignant GISTs is not clear-cut, rather they display a spectrum of biological behaviour. Mitotic index, size and the use of immunohistochemical proliferation markers may give an indication of the malignant potential of a GIST.

Surgical resection is the treatment of choice for GISTs. There are favourable trial data supporting the use of the tyrosine kinase inhibitor, Imatinib, in patients with metastatic or unresectable GISTs.

Gastric carcinoid tumours are rare, comprising only 0.5% of gastric tumours. They arise in the oxyntic mucosa of the gastric corpus and fundus and are comprised of non-functioning enterochromaffin-like cells. Gastric carcinoid tumours may be sporadic or can occur in the context of autoimmune atrophic gastritis, Zollinger-Ellison syndrome and in the MEN-1 syndrome. Carcinoid tumours over 2cm in size are associated with an increased risk of lymphovascular invasion and metastasis, and resection is recommended.

Numerous abnormalities of chromosome structure and number have been reported in gastric cancer series although no specific aberration has yet been identified.
Those chromosomes most commonly involved in simple numerical aberrations include X, Y, 1, 7, 8, 9, 17 and 20. Polysomy for chromosome 17 has been reported to be associated with lymphovascular invasion and nodal metastases.
Conventional cytogenetic analysis of 15 gastric cancers using G-banding revealed structural aberrations most commonly involving chromosomes 1, 11, 14, 7, 17, 6, 8 and 13. The aberration add(11)(p15) was found in five of the cancers analysed.
Multicolour spectral karyotyping has been employed to identify recurrent chromosomal rearrangements in gastric cancer cell lines. Chromosome 8 was most commonly involved in rearrangements. Recurrent translocations, frequently involving known oncogene and tumour-suppressor gene loci, were identified with breakpoints most frequently occurring at bands 8q24 and 11q13.

Comparative genomic hybridization has been used to screen for abnormalities of copy number in gastric cancers. In a study of 62 gastric adenocarcinomas, and 6 cell lines, 84% of tumours and all of the cell lines showed changes in DNA copy number. Specific patterns of allelic gains and losses appeared to correlate with different histopathological and disease-related features, such as metastases.
Loss of heterozygosity (LOH) studies in gastric adenocarcinomas have shown high LOH at chromosome arms 1p, 3p, 4p, 5q, 7p, 8p, 9p, 12q, 13q, 17p, 18q and 22q. The intratumoural distribution of LOH between early and advanced gastric cancer has been compared, and suggests that multiple losses occur as an early event in tumorigenesis with a few sporadic losses occurring later in disease progression.

CDH1 encodes E-cadherin, a member of the cadherin superfamily of calcium-dependent cell adhesion molecules. Downregulation of E-cadherin is observed in a number of epithelial-derived human cancers and promotes invasion through loss of epithelial cell-cell adhesion.

Somatic mutations are found in more than 50% of diffuse type gastric cancers but are not found in the intestinal histological type. There is a significant rate of LOH for CDH1 in sporadic gastric cancers (SGCs) of both histological types. Downregulation via promotor hypermethylation, along with mechanisms acting at transcriptional and post-transcriptional level, may act as the second hit in both inherited and sporadic diffuse cancers.

The C-MYC proto-oncogene encodes a transcription factor involved in activation of a number of genes involved in cell proliferation.

C-ERBB2 is amplified/overexpressed in 8-30% of gastric cancers. C-ERBB2 expression is more common in intestinal type tumours and is a marker of invasion and metastasis. Somatic mutations within the kinase domain have been reported in gastric cancers as well as other solid tumours.

Overexpression of C-MET has been reported in both histological subtypes of gastric cancer and is associated with poor prognostic features. The H. pylori CagA protein appears to interact with the MET protein leading to activation.

The APC tumour suppressor protein is a key component of the WNT / Beta-catenin signalling pathway.

Gastric fundic gland polyps are observed as an extracolonic feature of FAP. Occasional malignant transformation has been reported.

Whilst somatic APC mutations are common in gastric cancers, their significance with regards to tumorigenesis remains unclear. It has been postulated that APC mutations play a role in adenoma formation and dysplasia, rather than the promotion of malignant progression.

Loss of functional p53 has been reported in virtually all human cancers including gastric cancers. Data on the significance of p53 mutations in SGC development, progression, and prognosis are conflicting.

The oncogene K-SAM is amplified/overexpressed in approximately 50% of diffuse type gastric cancers but not in the intestinal histological type.

COX2 is upregulated in 49-83% of gastric cancers. COX2 expression is particularly high in early gastric cancers suggesting that it may play an important role in early events in tumorigenesis. There is conflicting evidence on the association between H. pylori and the induction of COX2 in gastric cancer.

The runt-related transcription factor 3 acts as a tumour suppressor protein.

Silencing of RUNX3 has been reported in up to 60% of gastric cancers and appears to be effected through hypermethylation of CpG islands within the exon 1 region. Hemizygous deletion of RUNX3 is observed in around 30% of gastric cancers, whilst mutations and small deletions seem to be rare.

The phosphate and tensin homolog acts as a tumour suppressor. The protein is involved in regulation of cell cycle progression in he G1 phase. Inactivation of PTEN is observed in multiple advanced cancers and cancer cell lines.

Gastric hyperplastic polyps are a recognised feature of Cowdens syndrome although these are generally considered non-neoplastic.

Gastric adenocarcinoma is a recognised part of the hereditary nonpolyposis colon cancer (HNPCC) spectrum of tumours. Dominantly inherited germ line mutations in MLH1 and MSH2 account for 90% of cases of HNPCC. HNPCC confers a 5% lifetime risk of gastric cancer.

Micosatellite instability (MSI) is the hallmark of defects in the MMR system. Around 15% of SGCs show MSI, most frequently due to hypermethylation of the MLH1 promoter. Recent data suggest that mutations in known MMR genes in SGCs are uncommon and likely arise as a result of the mutator phenotype, rather than cause it.