Primary Oral Mucosal Melanoma (POMM) is an aggressive and rare disease that involves mostly the hard palate and upper gingiva, followed by mandibular gingiva, lip mucosa, and other oral sites. POMM develops primarily between the 5th and 8th decades of life and most studies report a similar distribution between males and females. In contrast to cutaneous melanomas, the risk factors and pathogenesis are poorly understood. However, genetic profiling of mucosal melanomas have identified a number of altered genes, such as KIT, BRAF and N-RAS, suggesting that molecular pathways like the mitogenactivated protein kinase (MAPK) pathway (RAS/MEK/ERK) and the phosphotidylinositol-3-kinase-PTEN pathway (PI3K/AKT/PTEN/mTOR) might be used for potential targeted therapy.

Table 1. Classification for the mucosal melanoma of the head and neck

The cell of origin of Primary Oral Mucosal Melanoma (POMM) is the melanocyte, which are cells derived from the neural crest and that migrate to endodermal or ectodermal derived tissues, including mucosa (Barrett & Raja, 1997; Batsakis, 1999).

The etiopathogenesis of mucosal melanomas is not yet established. Sun exposure is not related to its genesis. However, ethnicity, family history, syndromes and preexisting lesions may influence its development (Batsakis et al., 1982; López et al., in press; Warszawik-Hendzel et al., 2014).

POMM is rare and represents 0.2 to 8.0% of all melanomas diagnosed in Europe and United States and 0.26% of all oral cavity tumors (McLaughlin et al., 2005; Chidzonga et al., 2007; Sortino-Rachou et al., 2009).
Most studies report a similar distribution of mucosal melanomas (MM) between males and females. However, there is a significant discrepancy in the incidence of MMHN between races: among Japanese oral melanoma accounts for 7.5% of all melanomas versus less than 1% in Caucasians. MM develops primarily between the 5th and 8th decades of life and the incidence increases with age (López et al., in press; Warszawik-Hendzel et al., 2014; Lourenço et al., 2014; Mihajlovic et al., 2012; Meleti et al., 2007).

POMM involves mostly the hard palate and upper gingiva, followed by mandibular gingiva, lip mucosa, and other oral sites. Image exams are mandatory to confirm that oral mucosa is the primary site of the lesion. Clinically, POMM lesions may be macular or nodular and they can appear as black, brown, white, gray, purple, or reddish shades. Satellite lesions are frequently present surrounding the initial tumor. Approximately a third of all oral melanomas are asymptomatic (Warszawik-Hendzel et al., 2014; Lourenço et al., 2014). POMM lesions are usually found during routine dental examination. Alternatively, symptoms may include complaints of ill-fitting dentures, ulceration, and bleeding (Patel et al., 2002; Rapidis et al., 2003; Gavriel et al., 2010). In Figure 1, an example of oral mucosal melanoma can be observed. 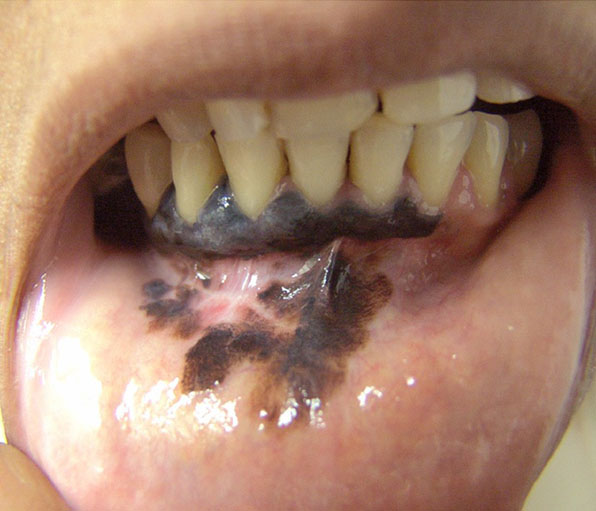 Usually mucosal melanomas can be diagnosed with confidence on H&E stained sections. In case of amelanotic lesions, immunohistochemical stains are of significant help. Useful markers include S-100 protein, HMB-45, and Melan-A (Meleti et al., 2007; Lourenço et al., 2014). Histologically, POMM is characterized by the proliferation of neoplastic melanocytes with variable phenotypes epithelioid, spindle, and plasmacytoid tumor cells that are arranged in a sheet-like, organoid, alveolar, solid, or desmoplastic architecture. Tumors with mixed cell phenotypes are more aggressive and are associated with a higher prevalence of vascular invasion and metastasis. Usually the neoplastic proliferation lies along the junction between the epithelial and lamina propria, but in advanced, ulcerated lesions, this might be difficult to be detected. Melanin pigment is noted in almost 90% of lesions.
The Clark and Breslow classifications are the most frequently used assessment systems for the prognosis of cutaneous melanoma, but they less applicable in the oral cavity due of its histological peculiarity. In 1995, the Western Society of Teachers of Oral Pathology agreed that POMM lesions should be considered separately from the cutaneous form. There are 3 histological stages of POMMs: stage 1, primary site; stage 2, with lymph node metastasis; and stage 3, with distant metastasis. Furthermore, a 3-level microstage system was established: level 1, in situ melanoma with no evidence of invasion or with the presence of individual or agglomerated invasive melanocytes with fewer than 10 atypical melanocytes near the subepithelial junction; level 2, melanoma cells, limited to the lamina propria; and level 3, invasion of the deep conjunctive tissue, including skeletal muscle, bone, or cartilage.
There are yet several issues that must be addressed in the histological evaluation of head and neck PMMs: (1) the architecture of the lesion in small biopsies, (2) difficulties in specimen representation, and (3) advanced disease stage that might be associated with tumor necrosis. Histopathological aspects of mucosal melanomas can be observed in Figures 2, 3 and 4. 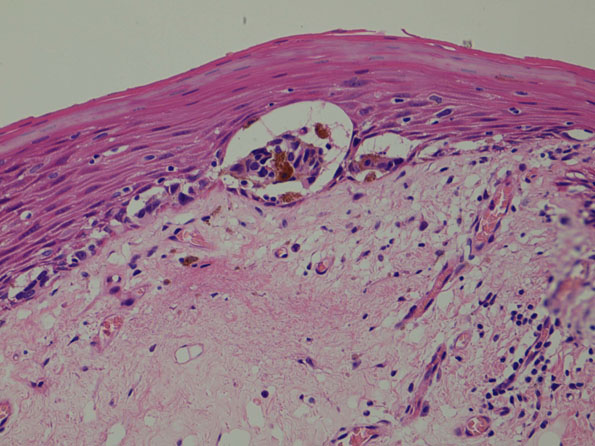 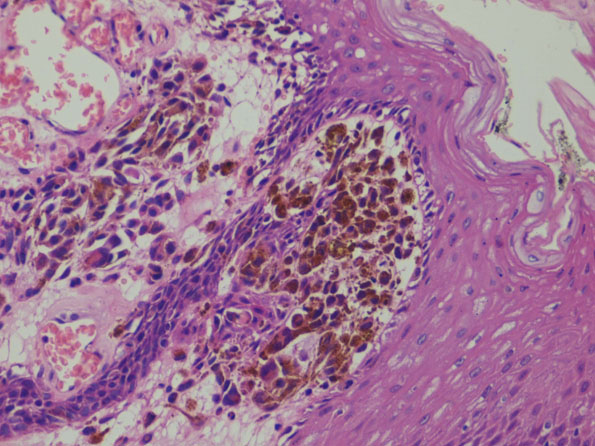 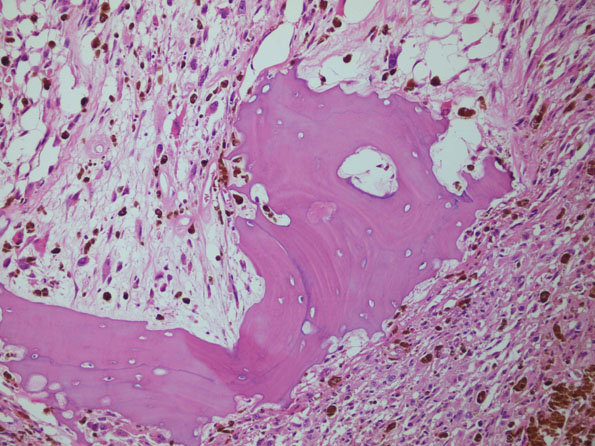 The mainstay treatment for mucosal melanoma is complete surgical resection. In patients with recurrent disease and without distant disease, a second surgical procedure is considered as the best option (López et al., in press).
Although malignant melanoma has been regarded as a radioresistant tumor, radiotherapy has become utilized as adjuvant treatment, considering the tumor heterogeneity. Precise indications for radiotherapy have not been defined and it is generally used only in advanced and recurrent cases (Krengli et al., 2008; Wagner et al., 2008).
So far, no systemic therapy has been recognized as effective for metastatic mucosal melanoma of the head and neck. Combinations of cytotoxic chemotherapy with immunotherapy have shown higher response rates (Bartell et al., 2008).
Some targeted therapies have been considered as effective for patients with c-Kit or BRAF gene mutations (López et al., in press; Warszawik-Hendzel et al., 2014).

Mucosal melanoma of the head and neck has a poor prognosis with few long-term survivors. Undifferentiated tumor cell morphology, vascular and neural invasion, tumor necrosis, thickness of the tumor, cervical lymph node metastasis are considered to be independent predictors of outcome (López et al., in press; Kerr et al., 2012; Prasad et al., 2002). Five-year survival rate have been reported to be within the range of 4.5 to 48.0% (Shuman et al., 2011; González-García et al., 2005; Rapidis et al., 2003).
Prasad et al. (2012) investigating molecular predictors of prognosis in mucosal melanomas reported that Bcl-2 expression is associated with better survival. Other factors associated with poor prognosis are loss of p16 expression and positivity for p53, although these results did not reach statistical significance.

There are some signaling pathways involved in mucosal melanoma pathogenesis. The mitogenu001eactivated protein kinase (MAPK) pathway (RAS/MEK/ERK) is a critical growth cascade in oral mucosal melanoma. Another important pathway is the phosphotidylinositol-3-kinase-PTEN pathway (PI3K/AKT/PTEN/mTOR), which is involved in the regulation of cell death. These two signaling pathways can be triggered by activation of c-kit (Soma et al., 2014; Kerr et al 2012; Buery et al., 2011; Junkins-Hopkins, 2010) (Figure 5).
C-KIT regulates the activity of MITF (microphthalmia-associated transcription factor) a transcription factor that is important for melanogenesis and melanocyte function. MITF expression has been found in 40 to 91% of mucosal melanomas of the head and neck (Morris et al., 2008; Prasad et al., 2001).
High rates of c-kit protein expression has been reported for mucosal melanomas and this immunohistochemical expression is associated with c-kit mutation (Rivera et al., 2008).A review of the literature report that 14% of mucosal melanomas harbor activating C-KIT mutations; 5% showed BRAF mutation and 14% oncogenic mutations in NRAS, which is much lower than the reported BRAF prevalence (56 to 59%) in cutaneous melanomas (Tacastacas et al., 2014; Cohen et al., 2004). Our group also investigated mutational status of NRAS and BRAF genes in oral mucosal melanoma: mutation in NRAS codons 12 and 13 was observed in 14.3% of the samples; NRAS codon 61 mutation was observed in 25.0% of the samples and 21.4% of the cases showed BRAF codon 600 mutation (unpublished results).
Prasad et al. (2004) reported that cancer-testis antigens (CT7, MAGE-A4, and NY-ESO-1) are frequently expressed in HNMM and may be potential targets for CTA based immunotherapy.Gwosdz et al. (2006) examined by immunohistochemistry and sequence analysis of the entire coding region of the p53 transcript in mucosal melanomas. Accumulation of the p53 protein occurred 58% of the samples and no mutation has been found.
Prasad et al. (2012) also reported that expression of bcl-2, p53 and loss of p16 expression are frequent and early events in POMM. bcl-2 expression in the initial tumors was associated with significantly longer overall and disease specific survival.
Bologna et al. (2013) evaluated the expression of integrins, claudins, and immunoglobulin-like adhesion molecules in oral mucosal melanomas and their association with clinical parameters. Positivity of integrin beta-3 and CD166 was associated with extensive vascular invasion and lower expression of CD54 was associated with cases with extensive necrosis. Most cases with metastatic disease were negative for CD66. Immunohistochemical results are shown in Figures 6 and 7.
Hsieh et al. (2013) examined the central components of the CDKN2A and RAS-RAF-MEK-ERK cascades by immunohistochemistry and found that the majority of the cases were positive for BRAF and ERK2. This pattern was associated with vascular invasion and metastasis. 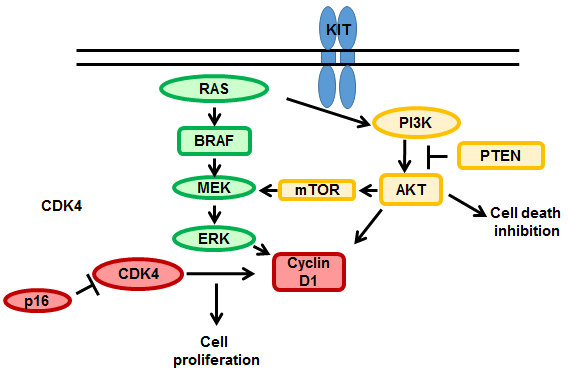 Figure 5. Signaling pathways involved in mucosal melanoma pathogenesis. The binding of the ligand to the KIT results in activation of the MAPK and PI3K pathways. 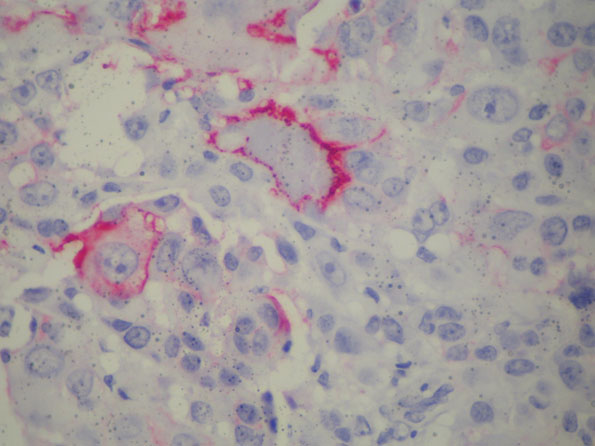 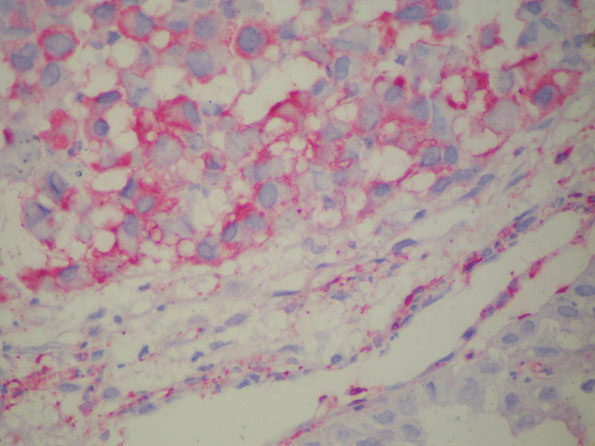 Genome-wide alterations in the number of copies of DNA and mutational status of BRAF and N-RAS in 126 melanomas from four groups (30 melanomas from skin with chronic sun-induced damage and 40 melanomas from skin without such damage; 36 melanomas from palms, soles, and subungual (acral) sites; and 20 mucosal melanomas) were investigated. The results indicate that there are distinct genetic pathways in the development of melanoma and implicate CDK4 and CCND1 as independent oncogenes in melanomas without mutations in BRAF or N-RAS (Curtin et al., 2005).
Comparative genomic hybridization performed in primary melanomas located on acral skin, mucosa, and skin with chronic sun-induced damage (CSD) revealed focal amplifications in chromosome 4q12.7, suggesting the involvement of c-KIT (Curtin et al., 2006).
Fluorescence in situ hybridization (FISH) was used to assess copy number changes of the cyclin D1 (CCND1), MDM2, c-myc (MYC), and HER2 genes in melanomas of melanomas of different location and different etiology. CCND1 amplifications was found in 10% of the mucosal melanomas and MYC amplifications was found in 62.5% of the mucosal melanomas (Glatz-Krieger et al., 2006).
Among the 23 acral and mucosal melanomas studied, copy number changes in GAB2 were found in 26% and KIT in 13% (3 of 23) of the cases. Mutations in BRAF were identified in 30% (7 of 23) of the cases and NRAS, in 4% (1 of 23) of the cases (Chernoff et al., 2009).

This gene has 5 transcripts (splice variants). BRAF-001 has 18 coding exons and a transcript length of 2,480 bps

Protein with 766 amino acids residues. BRAF is a serine-threonine kinase that once activated leads to activation of other kinases promoting cell survival. The evidence of BRAF mutation in mucosal melanomas is controversial, varying from 3 to 10% (Tacastacas et al., 2014; Buery et al., 2011; Cohen et al., 2004).

This gene has 1 transcript (splice variant). NRAS-001 has 7 coding exons and a transcript length of 4,449 bps