Noonan syndrome is an autosomal dominant disorder. Rare cases with parental consanguinity have been described, but it is not clear that these represent true instances of autosomal recessive inheritance. Like many autosomal dominant disorders, a significant, but not precisely determined, percentage of cases represent de novo mutagenesis. The prevalence of Noonan syndrome has not been determined accurately to date. Most authors cite the figure of 1 in 1,000-2,500 live births. However, that estimate was not based on a population study. Fetal loss occurs for Noonan syndrome so disease incidence is higher than prevalence, but no estimate of the magnitude of this discrepancy is available. 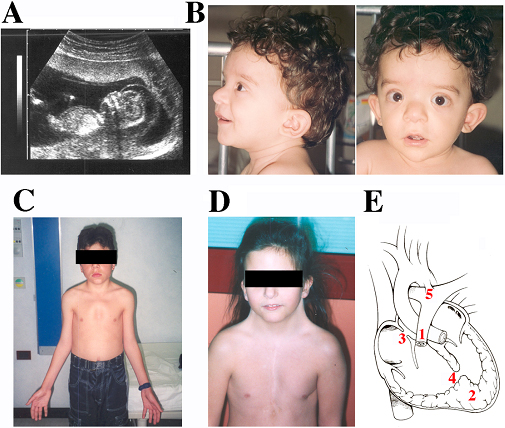 Children with Noonan syndrome are predisposed to malignancies, juvenile myelomonocytic leukemia (JMML) most commonly. JMML, formerly termed juvenile chronic myeloid leukemia or chronic myelomonocytic leukemia, is a myeloproliferative\/myelodysplastic disorder of childhood characterized by excessive proliferation of immature and mature myelomonocytic cells that originate from a pluripotent stem cell. In childhood, JMML accounts for approximately 30% of cases of myelodysplastic and myeloproliferative syndromes and 2% of leukemias. It typically presents in infancy and early childhood, and is often lethal. Recent studies have provided strong evidence that hypersensitivity to granulocyte-macrophage colony-stimulating factor (GM-CSF), due to a selective inability to down-regulate the RAS\/MAPK cascade, plays a central role in the clonal cell growth characteristic of JMML. In approximately 15-30% of JMML cases, the pathological activation of the RAS\/MAPK cascade results from oncogenic NRAS or KRAS2 mutations that specifically affect GTP hydrolysis, leading to the accumulation of RAS in the GTP-bound active conformation. JMML has been reported in children with neurofibromatosis type 1 (NF1), an autosomal dominant disorder resulting from germline loss-of-function mutations of the NF1 tumor suppressor gene. In children with NF1 and JMML, the proliferative advantage of the leukemic cells results from a second hit, the somatic loss or inactivation of the normal NF1 allele. Since the NF1 gene product, neurofibromin, is a negative modulator of RAS function, this loss is associated with RAS hyperactivity. Remarkably, deregulated RAS function appears to be restricted to GM-CSF signaling in hematopoietic cells. More recently, somatic activating mutations in the PTPN11 gene, which encodes the protein tyrosine phosphatase (PTP) SHP-2, have been documented in approximately 35% of cases with JMML. Mutations in the PTPN11, RAS and NF1 genes are largely mutually exclusive in JMML, and their combined prevalence accounts for approximately 85% of cases.
Acute lymphoblastic leukemia and solid tumors, particularly neuroblastoma and rhabdomyosarcoma, have also been documented with a relatively higher prevalence respect to the general population.

A significant percentage of Noonan syndrome cases arise from de novo PTPN11 mutations. Among fourteen informative families, each consisting of an affected individual heterozygous for a PTPN11 mutation and unaffected parents, the paternal origin of mutation has been demonstrated in all cases. Consistent with this finding, advanced paternal age was noted among fathers of sporadic Noonan syndrome cases, compared with fathers of the reference population.
Moreover, when a parent is affected with Noonan syndrome and harbors a PTPN11 mutation, a sex-ratio bias is operative for offspring who inherit the defect. This bias favors males by a factor of 2:1. The available data point to this bias being attributable to sex-specific developmental effects of PTPN11 mutations that favor survival of affected male embryos compared to female ones.

The PTPN11 gene and SHP-2 domain characterization. The coding exons are shown as numbered filled boxes. The functional domains of the protein, comprising two amino-terminal, tandemly arranged SH2 domains (N-SH2 and C-SH2) followed by a protein tyrosine phosphatase (PTP) domain, are shown below. Numbers below the domain structure indicate the amino-acid boundaries of those domains.

The PTPN11 gene counts 16 exons. Exon 1 contains the 5-UTR and the translation initiation ATG, and a few additional codons. Exon 15 contains the stop codon and exon 16 contains a major portion of the 3-UTR. Other features of the PTPN11 gene, such as the promoter region and enhancer elements have not been delineated.

A number of speudogenes, sharing more than 92% nucleotide identity with PTPN11 cDNA (including the untranslated regions), have been documented in the human genome. All the pseudogenes harbour frameshift mutations and multiple stop codons. Three of the five pseudogenes are likely to be expressed but with distinct tissue distribution and expression level.

Widely expressed in both embryonic and adult tissues.

SHP-2 functions as a intracellular signal transducer. It positively modulates signal flow in most circumstances, but can also function as negative regulator depending upon its binding partner and interactions with downstream signaling networks. SHP-2 positively controls the activation of the RAS\/MAPK cascade induced by several growth factors, and negatively regulates JAK\/STAT signaling. In most cases, SHP-2s function in intracellular signaling appears to be immediately proximal to activated receptors and upstream to RAS. The mechanisms of SHP-2s action and its physiological substrates are still poorly defined. However, both membrane translocation and PTPase activity are required for SHP-2 function. SHP-2 is required during development. Embryos nullizygous for Shp-2 have defects in gastrulation and mesodermal patterning resulting in severe abnormalities in axial and paraxial mesodermal structures. Shp-2 function is also required for development of terminal and skeletal structures, semilunar valvulogenesis in the heart, and hematopoiesis.

Studies reported PTPN11 mutation detection rates ranging between 33% to 60%. Differences in inclusion criteria stringency and recruiting strategies are likely to responsible for such variable mutation detection rate. It should also be emphasized that the mutation prevalence detected in any Noonan syndrome cohort is sensitive to its composition in terms of relative abundance of sporadic and familial cases, as PTPN11 mutations appear to be more prevalent among families transmitting the trait compared to sporadic cases. With those issues stipulated, the contribution of PTPN11 mutations to the etiology of Noonan syndrome appears to be approximately 50%.
A statistically significant association with pulmonary valve stenosis and lower incidence of hypertrophic cardiomyopathy was found among the group with PTPN11 mutations. Overall, a large percentage of PTPN11 mutation-negative individuals tended to exhibit fewer or mild clinical features of NS, even though approximately half of the Noonan syndrome patients without a PTPN11 mutation appeared clinically indistinguishable from typical PTPN11 mutation-positive patients.