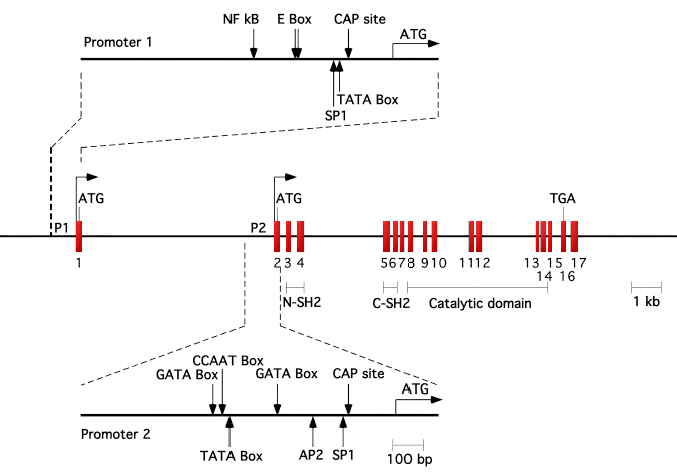 The human PTPN6 gene is divided in 17 exons spanning a length of 14740 bp. A notable feature of the PTPN6 gene is that it has two promoter regions. Whereas the distal promoter, P1, located upstream of the very short exon 1 (also known as exon 1a) is active in epithelial cells, the proximal promoter P2 that initiates gene transcription from exon 2 (known as exon 1b), is utilized by the hematopoietic cells. The function of P1 promoter has been partially elucidated, while the structure and regulatory mechanism of the P2 promoter remain essentially unknown.
Recent findings, characterized the hematopoietic cell-specific P2 promoter of PTPN6 gene as well as identified the PU.1 transcription factor as the activator of the P2 promoter.

PTPN6 tyrosine phosphatase is encoded by the PTPN6 gene and expressed primarily in the hematopoietic and epithelial cells. 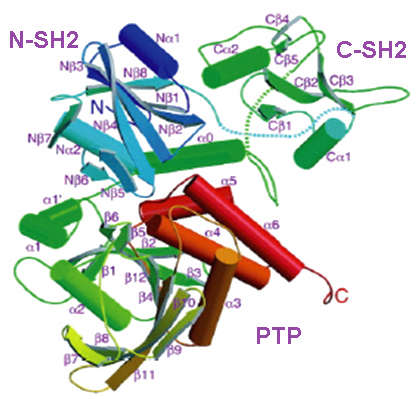 PTPN6 plays a peculiar role in the maturation and functional differentiation of lymphoid and myeloid cells as underlined by the aberrant proliferation and impaired hematopoiesis in the "motheaten" (me) mice that display defects in the Shp-1 gene expression. The role of PTPN6 in hematopoiesis has been shown in motheaten and viable motheaten (meν) mice, characterized by mutations at the Shp-1 locus. The Shp-1 mRNA from me bone marrow cells have a 101 bp frameshift deletion in the coding region of the N-terminal SH2 domain, while meν bone marrow cells have an in-frame 15 bp deletion or a 69 bp in-frame insertion within the PTPase catalytic domain. Shp-1 acts in the immune and other hematopoietic cells by inhibiting signaling through receptors for cytokines, growth factors and chemokines as well as receptors involved in the immune responses and programmed cell death. Moreover, PTPN6 acts as tumor suppressor and loss of its expression has been identified in the whole spectrum of myeloid and lymphoid malignancies.
According to Gilfillan, PTPN6 is found to be constitutively associated with FcεRI, with an opponing roles in FcεRI-mediated mast cell signaling. The study demonstrated that PTPN6 caused the decreased phosphorylation of FcεRI and Syk, but, also, an enhanced phosphorylation of JNK and an increased of the TNF production is observed. This study, suggests that PTPN6 may play a negative role proximal to FcεRI.
It was also demonstrated that the PTPN6 protein tyrosine phosphatase negatively modulates the glucose homeostasis and insulin activity, through a dephosphorylation of transmembrane glycoprotein Carcinoembryonic Antigen-related Cell Adhesion Molecule-1 (CEACAM-1).
The data obtained from in vitro studies, suggested that the deficiency of PTPN6 was associated with the increase in insulin-evoked tyrosin phosphorylation of the insulin receptor, IRS-1 and IRS-2, as well as enhanced activation of PI3K and Akt in liver and skeletal muscle.
Moreover, the activation of PTPN6, through a PKC-δ and p38α MAPK actions on PDGFRβ is involved in hyperglycemia and causes an increase vascular cell apoptosis and diabetic vascular complications.

The absence or impaired function of PTPN6 in the homozygous state causes the development of the motheaten phenotype in mice, an autosomal recessive condition with focal skin inflammation and the absence of hair. Failure of neutrophils to undergo apoptosis results in the accumulation of these cells in the peripheral blood, skin, lung and spleen of affected mice.

A pathologically similar extensive skin infiltration by neutrophils is present in Pyoderma gangrenosum (PG) and Sweets syndrome (SW), two uncommon neutrophilic dermatoses of unknown origin. Isoforms resulting from deletions of exons 2, 5, 11, and 15 and retention of intron 1 or 5 were identified in a patients with a familial case of SW, who had a neonatal onset of an inflammatory disorder with skin lesions and a biopsy specimen consistent with SW. These isoforms were associated with a heterozygous E441G mutation and a heterozygous 1,7-kbp deletion in the promoter region of the PTPN6 gene. The E441G mutation changes the hydrophilic, negatively charged amino acid glutamate to the hydrophobic nonpolar, aliphatic amino acid glycine, thereby potentially affecting the tertiary structure of PTPN6. SW an acute febrile neutrophilic dermatoses appears in several clinical forms as idiopathic, tumor associated, postinfectious and drug induced (for example after an administration of granulocyte macrophage colony stimulating factor). SW and PG have strong associations with hematological tumors. Recent studies have shown that patient with leukemia and lymphoma had methylated a P2 promoter in the PTPN6 gene, causing the absence of PTPN6 protein.
PTPN6 is expressed at low level in non-hematopoietic cells while higher levels of this protein are found in hematopoietic precursors. PTPN6 promoter methylation causes loss of expression in leukemias, which results in the activation of the JAK/STAT pathway. PTPN6 plays a role in chronic myelogenous leukemia transformation and progression: it seems to be physically associated with BCR-ABL being able both to block BCR-ABL-dependent transformation and to mediate PP2A induced BCR-ABL proteosome-degradation. The tyrosine phosphatase PTPN6 plays a prominent role as resistance determinant of Imatinib (IMA) treatment response in Chronic Myelogenous Leukemia cell lines (sensitive/KCL22-S and resistant/KCL22-R).
The lack of PTPN6 expression is frequent in malignant T cells and results from methylation of the PTPN6 gene promoter. Loss of PTPN6 enhances JAK3/STAT3 signaling and decreases proteosome degradation of JAK3 and NPM-ALK in ALK + anaplastic large-cell lymphoma.
According to Wus research, in most human Burkitts lymphoma cell lines, the expression of SHP-1 is decreased suggesting a role of SHP-1 in a developing of Burkitts lymphoma, a non-Hodgkins lymphoma, associated with EBV infection.
Moreover the activity of PTPN6, is also implicated in a breast cancer, ovarian cancer, prostate cancer, and pancreatic cancer.