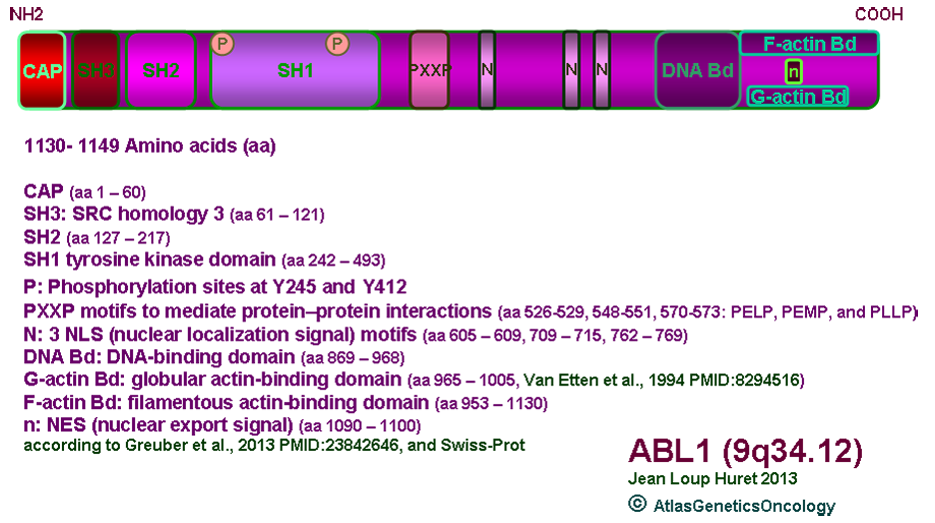 1130-1143 amino acids; 4 domains: of which are SH (SRC homology) domains; NH2-term -- domain 1: SH3 (where can bind the binding protein BP1, to inhibit SH1 activation) and SH2 (with high affinity towards BCR first exon) -- domain 2: SH1 (with a self-phosphorylable tyrosine) -- domain 3: nuclear localization domain (DNA binding, but not during mitosis) -- domain 4: actin binding (cytoskeleton) --COOH-term; note: 1b (but not the 1a alternative) myristylable allowing anchorage to the membrane.
Normal ABL has a tri-dimensional structure which is tightly preserved in a closed, inactive conformation order to prevent oncogenic activation. The maintenance of this inactive conformation is possible by:

c-abl is localized to the nucleus, plasma membrane and actin cytoskeleton.

SRC homology; like SRC, ABL is one of the tyrosine kinases which are not membrane receptors.

Entity name
t(9;12)(q34;p12)/acute lymphoblastic leukemia (ALL) --> ETV6-ABL1
Disease
Common ALL; yet poorly known.
Hybrid gene
5 ETV6/TEL from 12p12 - 3 ABL from 9q34.
Fusion protein
NH2-term Helix Loop Helix from ETV6(TEL) fused to Tyr Kinase from ABL COOH-term; localised in the cytoskeleton.
Oncogenesis
Forms HLH-dependent oligomers, which may be critical for Tyr kinase activation; oncogenesis may be comparable to that induced by BCR/ABL.
Entity name
t(9;22)(q34;q11)/chronic myelogenous leukemia (CML) --> BCR/ABL1
Disease
All CML have a t(9;22), at least at the molecular level (BCR/ABL); phenotype and stem cell origin: multipotent progenitor: t(9;22) is found in all myeloid and B- lineage progenitors.
Prognosis
The prognosis of CML has changed radically over the last 10 years, due to the development of novel drugs able to target the enhanced tyrosine kinase activity of BCR-ABL. The first of these therapies is Imatinib Mesylate (Gleevec) which has become the first line therapy for all patients with CML (See CML). In the first cohort trial of patients treated with Imatinib mesylate, the rates of complete cytogenetics responses (CCR) were exceptionally high (82 %) as compared to standard IFN-alpha - ARA-C therapy. At the most recent 6-year update, the overall survival is 90 % and most interestingly, the rates of progression towards more aggressive phases have been found to be progressively decreasing in all patients with major molecular responses (MMR). (For definition of MMR see CML). In IM-resistant or relapsing Ph1+ CML patients, second generation tyrosine kinase inhibitor (TKI) therapies such as Dasatinib (a dual SRC and ABL inhibitor) and Nilotinib have also recently become available.
Cytogenetics
Anomalies additional to the t(9;22) may be found either at diagnosis or during course of the disease, or at the time of acute transformation; mainly: +der(22), +8, i(17q), +19; +21, -Y, -7, -17, +17; variant translocations: t(9;22;V) and apparent t(V;22) or t(9;V), where V is a variable chromosome, karyotypes with apparently normal chromosomes 9 and 22, may be found.
Hybrid gene
see below

Fusion protein
BCR/ABL P210 comprises the first 902 or 927 amino acids from BCR, P190 only the 427 N-term from BCR; BCR/ABL has a cytoplasmic localization, in contrast with ABL, mostly nuclear.
Oncogenesis
BCR/ABL has a cytoplasmic localization role and all three BCR-ABL fusion proteins have been shown to exhibit oncogenic potential. All three hybrid proteins have increased protein kinase activity compared to ABL: 3BP1 (binding protein) binds normal ABL on SH3 domain,which prevents SH1 activation; with BCR/ABL, the first (N-terminal) exon of BCR binds to SH2, hidding SH3 which, as a consequence, cannot be bound to 3BP1; thereof, SH1 is activated; oncogenesis
1- proliferation is induced through activation by BCR/ABL of RAS signal transduction pathway, PI3-K (phosphatidyl inositol 3 kinase) pathway, and MYC;
2- BCR/ABL inhibits apoptosis (via activation of STAT5 and BclXL)
3- BCR/ABL provokes cell adhesive abnormalities (via CRK-L, FAK) as well as abnormalities of cell migration (via CXCR-4 whose expression is downregulated in CML cells expressing high levels of BCR-ABL).
In experimental settings CD44 has been shown to play a major role in homing of BCR-ABL expressing cells.
4- BCR-ABL induces a major genetic instability: Molecular pathways involved in this phenomenon have recently been elucidated (See BCR-ABL).
5-BCR-ABL and endogenous ABL have been shown to be the target of miR 203 which is heavily methylated in CML cell lines expressing BCR-ABL. Restoration of miR 203 expression leads to reduction of BCR-ABL levels, suggesting a potential use of this strategy for therapeutic purposes. 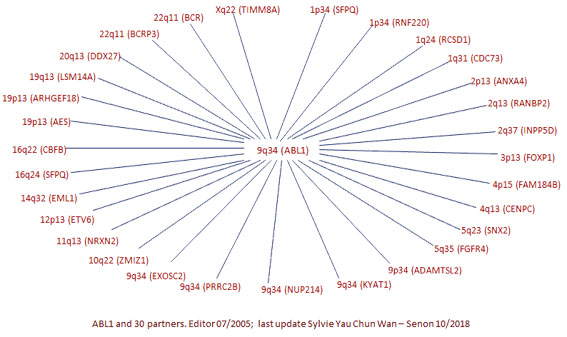