Previous studies on isolated i(17q) have suggested this aberration was associated with chronic myeloid abnormalities with a high rate of progression to AML; a new clinico-pathological entity in which i(17q) is the sole abnormality has been reported in a mixed myeloproliferative disorder / myelodysplastic syndrome with an aggressive course.

i(17q) as sole cytogenetic aberration represents only 1% of cases in myeloid malignancies.

Isolated isochromosome 17q cases can be divided into 2 distinct subgroups based on the presentation: de novo AML and MDS/MPN. All de novo AML fit into the WHO classification of AML with myelodysplasia-related changes (with the exception of 1 mixed phenotype acute leukemia), and showed features of both myelodysplasia (pseudo-Pelger-Huet-like neutrophils, micromegakaryocytes) and myeloproliferation (splenomegaly, hypercellularity, reticulin fibrosis, osteosclerosis).

A severe hyposegmentation of neutrophil nuclei (pseudo-Pelger Huet neutrophils (PHH)) and a prominence of the monocyte/macrophage lineage has been noted; other studies have identified an association between hyposegmented neutrophils and loss of 17p (called 17p- syndrome), always included in complex karyotypes; the i(17q) appeared to be a part of the malignant clone as demonstrated in cases available for a FISH analysis: all myeloid cell lines observed contained the abnormal i(17q), whereas none of the lymphocytes were affected. Morphologically, all showed myelodysplastic and myeloproliferative features, including pseudo-Pelger-Huet-like neutrophils, micromegakaryocytic hyperplasia, hypercellularity, fibrosis, and osteosclerosis.

We recommend that for cases with morphologic features suggestive of isochromosome 17q, such as pseudo-Pelger-Huet-like neutrophils or micromegakaryocytes, a complete workup with ancillary studies should be performed to explore features of both myelodysplasia and myeloproliferation to better classify the disease process, including stains for reticulum and collagen, immunostains using CD61 to reveal micromegakaryocytes, CD34 and CD117 to quantify the blasts on the core biopsy, iron stain to assess storage iron and ring sideroblasts, butyrate esterase stain to quantify monocytes, and myeloperoxidase stain to determine percentage and lineage of the blasts, as well as flow cytometry immunophenotyping of the blasts, cytogenetic analysis for the detection of isochromosome 17q, and mutational studies of common molecular markers seen in myeloid neoplasms. Review of the peripheral blood smear and clinical records with special attention to the presence of splenomegaly may also be helpful. 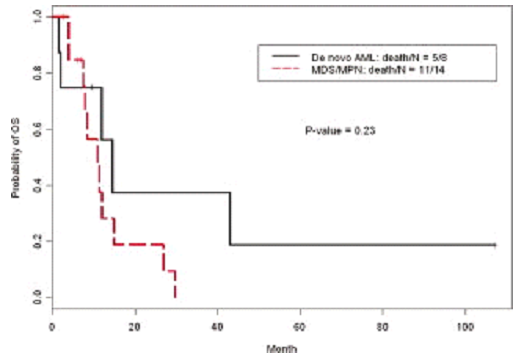 Note
The underlying molecular defect that produces the isolated i(17q) is unknown: breakage of the proximal p arm (17p11.2) with rejoining of both centromere-containing chromatids and subsequent inactivation of one centromere; breakpoints could involve important genetic material whose disruption could result in oncogene or tumor suppression gene deregulation.
In understanding the specific i(17q) phenotype, loss of genes localized on 17p were suggested as p53 (17p13.1); a direct correlation between p53 loss and PHH neutrophils was found in a series of MDS and AML with 17p- syndrome. However, Fioretos et al. assessed TP53 mutations in 5 Philadelphia negative myeloid neoplasms with isolated isochromosome.
17q by sequencing, and found no mutation in all 5 cases. Similarly, none of the 14 cases assessed in another series of patients demonstrated TP53 mutation. These results suggest that there is no association between isochromosome 17q and TP53 mutations, and that another oncogene(s) at 17q and/or tumor suppressor gene(s) at 17p may play an important role in the pathogenesis of isochromosome 17q-associated myeloid neoplasms. The presence of a moderate apoptotic rate also suggests that the cytogenetically uninvolved TP53 allele is functional.

An isochromosome 17 results in a loss of the short arm (17p) and duplication of the long arm (17q) leading to a single copy of 17p and three copies of 17q.
An i(17q), usually observed in a complex karyotype, has been reported in solid tumors and in various types of hematological diseases: acute myeloid leukemias and chronic myeloid leukemias, myelodysplastic syndromes and myeloproliferative neoplasms, acute lymphoid leukemias and chronic lymphoid leukemias, and Hodgkin and non-Hodgkin lymphomas.
In chronic myeloid leukemia, i(17q) is a frequent and well known secondary anomaly, either solely in 10% of cases, or with other additional anomalies , in at least another 10% of cases, in particular with +8.
It is believed that i(17q) as a sole abnormality is a distinctive clinicopathological entity with a high risk to a leukemic progression; a subset may present as de novo AML. These neoplasms have distinctive morphologic features, including multilineage dysplasia and concurrent myeloproliferative features. Isochromosome 17q usually occurs at time of blast transformation and heralds an aggressive clinical course. In the 2008 World Health Organization (WHO) classification system, myeloid neoplasms with isochromosome 17q are only briefly mentioned within the MDS/MPN category. 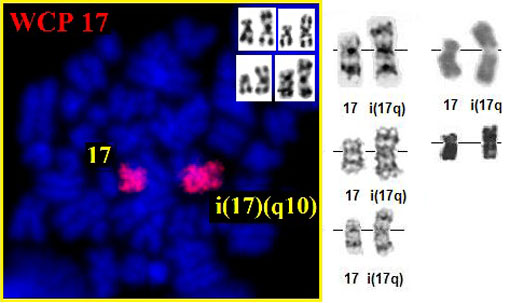