IRS1 belongs to the insulin receptor substrate (IRS) protein family, these proteins are characterized by the presence of a pleckstrin homology (PH) domain and a phosphotyrosine binding (PTB) domain (figure 1). The PH domain contributes to protein-protein binding and facilitates the recruitment of IRS proteins by cell membrane receptors. The PTB domain is actived by receptors (Mardilovich et al., 2009).

IRS1 is predominantly found in the cytoplasm. Nuclear localization may occur in some cell types and under specific stimuli.

IRS1 is an intracellular signaling adaptor protein that integrates and coordinates numerous biologically key extracellular signals within the cell. First identified as a signaling intermediate of the insulin receptor (IR), it is now clear that IRS1 is the main substrate of the insulin-like grow factor 1 receptor (IGF1R) (Dearth et al., 2007). IRS1 contains multiple tyrosine phosphorylation sites, which during insulin stimulation are phosphorylated and act as docking sites for multiple SH2-containing proteins including PI3K, Grb2, Nck, Crk, Fyn, Syp and SHP2 (Mardilovich et al., 2009). The two best-studied being the PI3K/Akt/mTOR and the MAPK pathway, which includes the ERK protein (figure 2) (Mardilovich et al., 2009). IRS1 has no intrinsic kinase activity and requires upstream activators, however many studies have shown that this signaling adaptor is in itself oncogenic and can induce malignant transformation (Dearth et al., 2007).
More recently, nuclear localization of IRS1 was observed in cells expressing SV40 T antigen, fibroblasts under IGF1 stimulation, hepatocytes, 32D cells and others. Several nuclear functions have been attributed to IRS1, including DNA repair fidelity, transcriptional activity and cell growth, which contributes to tumor development and progression (Reiss et al., 2011).

IRS1 shares high homology in its N-termini with the other members of the IRS proteins family. IRS1 also shares a high homology among different species (table 1). 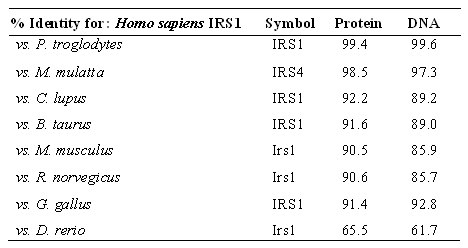 Mutations in this gene are associated with type II diabetes and susceptibility to insulin resistance (Kovacs et al., 2003).